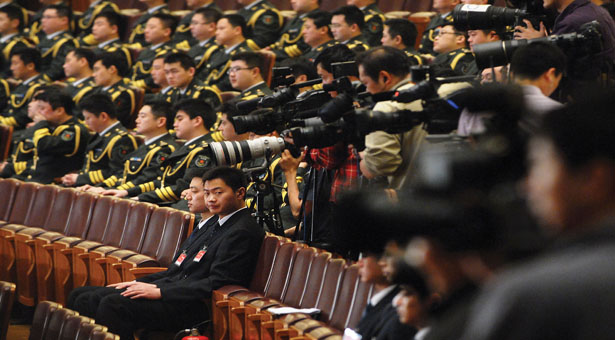 Notes on a scandal

Censoring information online in a country of more than 1.3 billion people might seem like the world’s biggest and fastest game of Whack-a-Mole. But the Chinese government is firmly committed to this seemingly insurmountable task of silencing controversial websites and postings as they arise.

Beijing has recently embarked on a campaign to quash “online rumors” that entailed arresting 1,065 suspects, shutting down 16 websites and deleting more than 208,000 “harmful messages” between mid-February and early April. The official line on specious information is stern, almost bizarrely so. “Internet rumors and lies packaged as ‘facts’ will turn conjecture into ‘reality,’ stir up trouble online and disturb people’s minds,” said the state-run People’s Daily. “If allowed to run amok, they will seriously disrupt social order, affect social stability and harm social integrity.”

The subtext is that of an authoritarian government struggling to shape the public narrative. More than 300 million Chinese have accounts on microblog services like Sina Weibo, giving rise to an unprecedented exchange of ideas and social commentary. Set beside multimedia postings by China’s most popular celebrities and thinkers, the traditional propaganda pieces seem clumsy at best. This disconnect has created big problems for the government. Last summer, for example, government attempts to downplay a high-speed train crash near Wenzhou sparked public outrage.

The evolution of new media technologies demands that the government find a new approach to public relations besides traditional propaganda and censorship. It appears to be doing so. Since March, China has been engulfed in the mother of scandals, a murder that ended the political career of Chongqing Party Secretary Bo Xilai. The details of Bo’s transgressions remain vague, yet the way the narrative unfolded suggests Beijing’s public relations strategy is undergoing big changes.

Carrot and the stick

The Bo Xilai affair demonstrates that, despite loud pronouncements about “rumor quashing,” the Chinese Communist Party has not declared war on all rumors – just the ones that threaten its rule. Allowing certain rumors to circulate was an essential part of the undoing of Bo’s political career.

Bo’s name has been occasionally blocked from internet searches, but on the whole a tremendous amount of information has been available. News articles and Weibo posts have speculated about Chongqing police chief Wang Lijun’s flight to the US embassy for protection; the involvement of Bo’s wife, Gu Kailai, in the murder of British national Neil Heywood; and the nouveau riche tendencies of Bo’s son, Guagua.

The propaganda department apparently saw the wisdom in allowing certain rumors to circulate, namely those that eroded Bo’s popular appeal, a main source of his strength. The government only censored information when it veered too far off the set path – for example, when unsubstantiated rumors spread on Weibo of gunfire and a coup attempt in Beijing.

On the whole, the story’s evolution was firmly guided along Party lines. The first official news item, that Bo would step down as Chongqing party secretary, was announced only after two high-level government meetings concluded in Beijing, thereby ruling out the possibility of embarrassing questions. The announcement was carefully bracketed. It was preceded by Premier Wen Jiabao’s call not to repeat the mistakes of the Cultural Revolution, widely interpreted as a criticism of Bo’s Chongqing policies. It was then followed by a call from heir-apparent Xi Jinping for party unity. Both men appeared to be speaking honestly and directly to the public, and their statements helped guide a clean, Party-endorsed interpretation to the events: Namely, that Bo’s removal from his position as party secretary – which guaranteed he would not be included in the party’s top ranks this fall – would help ensure a peaceful transition of power in late 2012.

In the following weeks, rumors that Bo’s family may have played some role in Heywood’s death built suspense for the next act: the announcement of Bo’s suspension from the Politburo. Again, two narratives flanked the release. The first, a widely printed editorial calling for party unity, was a kind of pre-emptive media defense, an effort to dissuade criticism and commentary before it emerged. The second was the news that Bo’s wife, Gu Kailai, was under investigation for the murder of Heywood. This irresistible distraction played an offensive role, winning headlines and diverting popular attention away from the story of Bo’s removal.

Tricks of the trade

State media has celebrated this story as a new level of transparency. “When the Wang Lijun case was disclosed, the government did not cover it up but initiated an investigation accordingly. This is no longer the era where China would rather cover issues up to avoid revealing problems,” Global Times chimed in April.

This is clearly an exaggeration. Censorship remains central to the party’s media strategy, as the recent “rumor quashing” campaign – which focuses largely on anti-government information – demonstrates. But censorship is now just one tool in Beijing’s media kit. Government agencies, party organs and officials have themselves set up more than 50,000 microblog accounts, according to the Chinese Academy of Governance.

Sculpting the torrent of public information into a narrative that supports the CCP will always be a task that is impossible to perfect; stories like the coup rumors in Beijing or the attempted cover-up of the Wenzhou train accident are likely to continue to slip through the cracks. But guiding public opinion in a subtler fashion is likely to be more effective for Beijing than the wham-bam approach of traditional propaganda and censorship.

This governing philosophy is not new; it recalls the writings of Daoist monk Laozi roughly 2,500 years ago. “The Master doesn’t talk, he acts. When his work is done, the people say, ‘Amazing: We did it, all by ourselves!’”