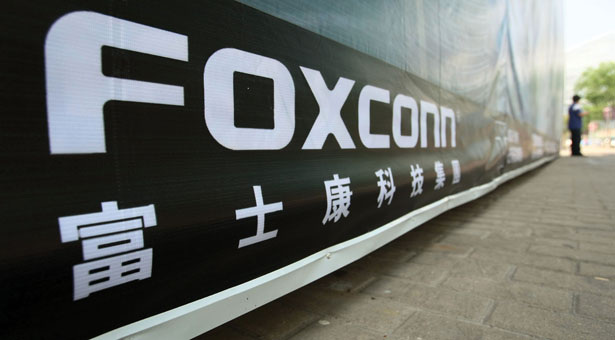 “Work smarter, not harder,” the mantra goes. Such is the case with Apple, which designs the world’s most popular consumer electronics but leaves the hard work of production to companies such as Foxconn Technology Group, also known as Hon Hai. Apple’s stock price has continued its meteoric climb this year, gaining 37% between January and mid-May. For the first quarter, Foxconn seemed to climb with it.

But unlike Apple, Foxconn’s hard work is often dirty and depressing. Media outlets have pumped out negative reports on poor working conditions at Foxconn factories, peaking with an in-depth report by The New York Times in January. This prompted Foxconn to invite the non-profit Fair Labor Association to audit three of its factories. The FLA confirmed what the media had already exposed: The life of a Foxconn worker is characterized by low wages, long hours and safety risks.

Foxconn pledged to raise wages and hire more employees to cut down on overtime, costly measures that mollified the media but spooked investors with an eye on the bottom line. The stock price of Taiwan-listed Hon Hai Precision Industries began to falter and dropped further with the release of disappointing first-quarter earnings.

But despite the cost pressure and negative publicity, Foxconn remains a strong investment, and investors would be wise to view the current trough as a buying opportunity. Foxconn is still the biggest player in consumer electronics, and its production volume and margins are set to improve later this year.

More than an Apple supplier

Foxconn will be able to endure this crisis in part because of its awesome scale. Defining the company as “an Apple supplier” does not do it justice. Foxconn accounts for 40% of the global market for consumer electronics and makes products for many of the world’s top technology companies, including Microsoft, Motorola and Intel.

Hon Hai’s profits have been squeezed by the higher wages and aggressive hiring; its mainland workforce grew 6% between January and April. In the first quarter, the company reported a profit of US$504.6 million, missing analyst estimates by 31%. Profit margins decreased to 1.9% from 3.3% in the previous quarter, according to HSBC estimates.

Hon Hai will continue to face increasing costs in the second quarter and will also grapple with lower volumes. Production will temporarily drop as Apple transitions from the iPhone 4S to the iPhone 5, though the impact should be partly mitigated by increased iPad sales.

By the third quarter, however, these pressures should begin to ease. Hon Hai has begun to cut overtime earlier than its initially proposed deadline of mid-2013. The company has also started to introduce X-ray machines that will automate some inspections previously done by humans. The company projects it will have 1 million robots in its factories by 2014, up from about 10,000 in 2011.

Consumers are likely to be the ultimate answer to Foxconn’s cost issues. Apple has pledged to start paying for Foxconn’s increased staffing costs, and those costs are likely to be gradually passed on to Apple buyers. Foxconn has yet to strike such deals with other suppliers, but it will probably strive to do so to maintain its profitability.

Foxconn is large enough that it may have the upper hand in these negotiations, since its customers have few alternatives. Foxconn’s competitors, such as Taiwan’s Pegatron, are facing similar cost pressures. As Foxconn raises its wages, they must too in order to retain and attract employees.

Foxconn remains one of the few companies that can handle the high volumes and quick turnaround times required by Apple and the world’s other top technology companies. As long as Apple remains a runaway success, it should be able to take Foxconn along for the ride.