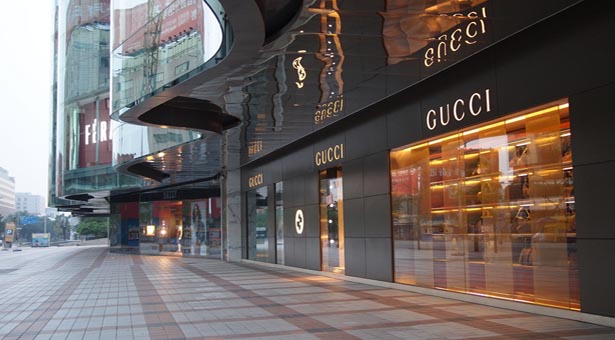 Fashion is a fickle thing all over the globe, but nowhere more than in China. Everyone in China was just starting to accept that the golden days of Louis Vuitton as the brand du jour were past and Gucci was the new bling king of the PRC, but then they get whacked with the “potato dumpling” curse. As soon as the fashionistas of Shanghai and Beijing see the nouveau riche of the countryside (called “potato dumplings” in Shanghai’s rather cruel slang) rolling into town with Gucci, the cachet disappears faster than you can blink. Cue a rash of hurried calls from analysts worried about Gucci’s slowing sales in China. But not to worry too much: Gucci still gets about a third of its global sales out of the PRC – those potato dumplings do pay the bills. The next luxe label to ascend the dizzying heights only to crash? Perhaps Prada, who has had a great last quarter since Gucci stumbled.

Starbucks, purveyors of frothy coffee to the masses (with, in my humble experience, a little more froth than coffee) are seriously rolling out in China’s third-tier cities and yonder parts. In the old days in China (eeerrr, about four years ago!) the arrival of a McDonald’s or a KFC in your town was a sign that you’d arrived, enough to provoke ticker tape parades and long queues of the aspirant middle class waiting to clutch Big Macs and little ice cream cones to feel all warm and global. But Mickey D’s and KFC are now old hat, and Starbucks is the new sign of lower-tier arrival. The status-conscious middle class can join their aspiring brothers and sisters in standing in line for 20 minutes to get a Grande Mochaccino for RMB25 or whatever. What an honor!!

Surprisingly little tabloid outrage in the UK greeted the news that Shanghai Bright Food Group was snapping up Weetabix Limited, and there was even less middle-class outrage that the sale included suburban favorite Alpen Muesli. A couple of lame headline gags about “gobbling up” and “the new Chinese takeaway item” were all we got – disappointing for those of us who appreciate a nice punning headline. Breakfast cereal, it seems is not a sector to be defended patriotically. Things may change though as China broadens its range of acquisition targets around the world – Lotus cars? ICBC in the US lending market? And (the biggie) what if China Guangdong Nuclear Power does, as it is rumored to be considering, buy Britain’s Horizon Nuclear Power and build new atomic plants in Gloucestershire and northern Wales! That could be a very different media day.

I thought there was nowhere further Chinese manufacturers could go with gift boxes. It’s been such a great market – Nescafe gift sets with cups, saucers and teaspoons; wine boxes with glasses and a corkscrew. Then we got high-priced plastic packaging for crisps and Snickers gift sets! Well, the new Cialis gift box (wooden no less) is quite something. The box opens to reveal a single Cialis tablet (and if you don’t know what Cialis does, I’m not going to tell you here – just check your junk mail filter!) on a spongy, silk-lined little bed. All for RMB500 (US$79, about four times the price of a single tab of the drug normally). Unfortunately I’m not exactly sure who is supposed to buy it for whom? It doesn’t seem like the sort of thing you’d give your boss really, and not quite the right thing for your father-in-law either. Perhaps a stressed magazine editor with deadlines approaching?

The cheek of it! With retail sales slumping – in real terms, sales rose 10.7% in April, the slowest since September 2011 – the government came round and asked retailers to drop prices to boost consumption in line with government policy. Not that the government was going to do anything proactive – no coordinated campaign such as the very successful and government-supported sale in Singapore that runs from May to July and involves retailers, the tourism industry and the government working together to stimulate spending. Oh no, just an order to cut prices. I’m glad to say retailers unanimously ignored the idea that they should take the hit for the sake of government policy. If the government wants to seriously be seen to stimulate consumer spending, why not stop adding silly taxes to retail sales – how about, as was suggested, dropping the city maintenance and construction tax (between 5-7%) or the new education tax (3% of VAT)? The answer was that this was not an option, and the price-cutting was dropped.