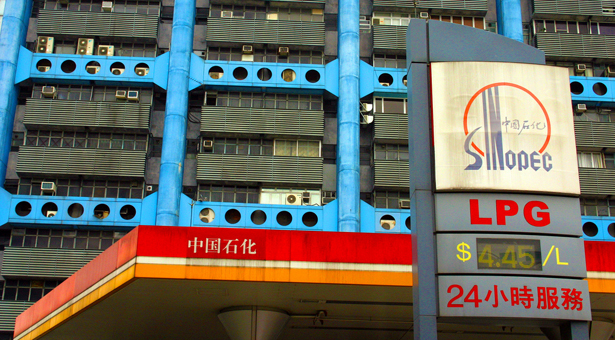 Most oil companies don’t wish for the global price of crude to fall, but Sinopec is in a unique situation. Global crude oil prices fluctuate around the clock, but the retail price of fuel in China is fixed by the government. Under the country’s strict fuel pricing regime, the government only raises gasoline and diesel prices when the international market price exceeds the government-mandated price at the pump by more than 4% within a 22-day window. But Beijing also reserves the right to postpone a raise when it pleases, usually in order to dampen inflation.

The upshot is that oil refiners are forced to swallow the sometimes prohibitive cost difference. This is particularly true for Sinopec, which devotes some 45% of its capital to refining, much more than its peers, China National Offshore Oil Corporation and PetroChina. Predictably, as the price of oil rose late last year, Sinopec’s losses grew in tandem. While the firm’s earnings were up 2% for the year overall, its fourth-quarter net profits fell 30%, almost entirely owing to its refining division.

Given these constraints, Sinopec’s best strategy is obvious: diversifying into upstream businesses, such as resource exploration and extraction. The company can either import the oil these projects produce into China or sell it on the global market; either way, it makes higher margins than in its downstream business of refining and distributing fuel. These projects also act as a hedge on refining losses, becoming more profitable as oil prices rise.

To that end, Sinopec has launched at least 74 acquisition attempts worth around US$48.1 billion since 2005, according to Thomson Reuters. The pace accelerated last year, as new chairman Fu Chengyu led the company in investing roughly US$19.7 billion.

Many of these newer investments have been in upstream unconventional oil and gas projects. Fu has said unconventional projects will fuel the bulk of Sinopec’s growth in coming years, and the firm is expected to invest another US$158 million in shale gas and oil projects this year. Although China contains the world’s largest proven shale gas deposits, commercial production remains distant. Chinese deposits have proven more difficult to tap than North American reserves, and Chinese companies will need time to acquire the requisite know-how from Western partners.

Any diversification is positive, but the strategy will take years, maybe decades, to significantly raise Sinopec’s bottom line. Until then, earnings will depend on the unpredictable price of oil, as well as Beijing’s readiness to use its state-owned companies as a shock absorber for inflation.