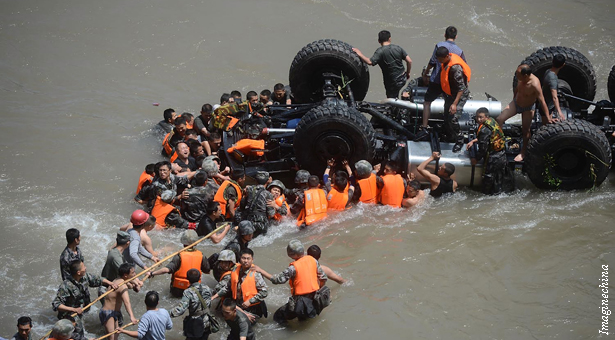 The earthquake that hit Sichuan province during the weekend was devastating, with the latest reports counting 188 people dead, many missing and 12,000 injured. The earthquake, centered on Lushan county, is a catastrophe all too familiar to China’s southwest, where a 2008 quake near Sichuan’s Wenchuan county killed an estimated 90,000.

Saturday’s quake will go down on a long list of major natural catastrophes in China, and the loss of life is no doubt a trajedy. But its economic impact could be less of a disaster, economists said in the immediate aftermath.

After expressing condolences, China economist Ting Lu at Bank of America Merrill Lynch broke down GDP numbers to illustrate the restricted scale of the economic damage, in a note on Sunday. The prefecture-level city of Ya’an, which oversees Lushan county and several surrounding counties, had a GDP of US$5.4 billion (RMB35 billion) in 2011. That’s 1.7% of Sichuan’s GDP and 0.7% for the country at large. But damage to Ya’an city itself was limited while Lushan and two other counties, which only account for 18% of the Ya’an economy, suffered the brunt of the devastation. The damage to the nation and province’s GDP will also be minimized because the counties have little manufacturing. The area simply isn’t very important to the country’s economy.

At the local level, economic activity will be briefly disrupted, but most of the damage is to existing assets, Yao Wei, Societe General’s China economist told CHINA ECONOMIC REVIEW. Therefore the impact on GDP, which only counts the value of new products and services, should be limited.

Yao pointed out that initial damage to the economy should also reverse relatively quickly. “When you have a natural disaster like this, at the beginning it’s negative [for the economy], but it could still turn to positive support” as the government moves in to spend on aid and reconstruction, Yao said. “At the moment, when you see all these losses, basically the disruption to the activity side, it should be short-lived and relatively limited.”

Government spending should more than make up for the economic damage, if the last two major earthquakes in the southwest are any indication. The government spent US$142 billion (RMB1 trillion) to rebuild after the Wenchuan earthquake, which wrought US$120 billion in damage, according to Lu’s note. Central authorities spent US$4.8 billion to rebuild after US$3.9 billion of damage in the 2010 earthquake in Yushu in neighboring Qinghai province.

Some costs related to rebuilding may be harder to discern. The money for reconstruction will likely have to be shifted from some other planned government spending, although it’s difficult to pinpoint from where,  potentially diverting growth from a different area or sector.

But on the whole, the tragedy’s toll is disproportionately human rather than economic. Over the weeks and months to come, residents and aid workers can focus on rebuilding lives in and around Lushan – the economy will right itself in the process.