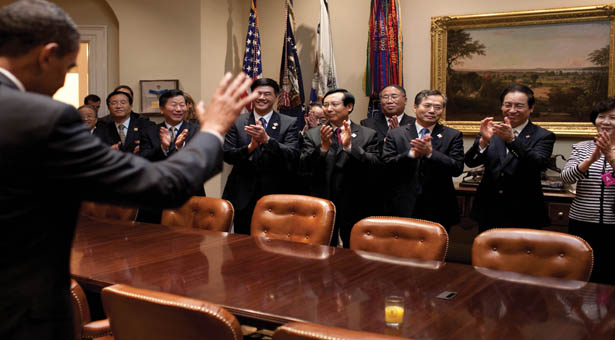 Two Chinese dissidents enter the US embassy in Beijing to seek asylum almost 23 years apart. One takes 13 months to leave the compound; the other takes just six days. Why?

At first blush, the case of Chen Guangcheng, a blind human rights lawyer who fled to the US Embassy in April, should have been considerably more complicated than that of Fang Lizhi, a dissident physics professor who sought asylum after the Tiananmen protests of 1989. Chen had escaped house arrest in Shandong province and fled to the embassy. Foreign media quickly discovered Chen’s situation, casting an unwanted spotlight on diplomats just before the Strategic and Economic Dialogue between the US and China began in Beijing.

Negotiating under time pressure, the situation might easily have spiraled out of control: Reports said both sides threatened to boycott the S&ED unless their demands were met. Fortunately, American and Chinese officials quickly reached a tacit agreement that Chen would be allowed to study at a Chinese university, far away from his native Shandong province. Even after Chen suddenly reversed course and demanded asylum in the US, diplomats on both sides improvised nimbly. Chen left China for the US on May 19, ostensibly to study abroad.

The S&ED resulted in progress on some important trade issues, and a visit by China’s defense minister to the US proceeded without incident. “At a strategic level I think the two sides will quietly take some confidence from this,” a senior US official told The New York Times.

Douglas Paal, a fellow at the Washington, DC-based think tank Carnegie Endowment for International Peace, credits the quick resolution of Chen’s case to a concerted effort by the Obama administration to develop personal ties between American and Chinese diplomats. US Secretary of State Hillary Clinton smoothed the crisis by privately appealing to her counterpart, Dai Bingguo, for “flexibility” on Chen, Paal said.

But while friendly personal relations no doubt helped, they are unlikely to be the main reason for such a dramatically different outcome between Chen’s speedy resolution and the year-long negotiations over Fang Lizhi’s fate.

In 1989, then-Secretary of State Brent Scowcroft similarly flew to China to make a personal appeal for Fang, but to no immediate avail. Henry Kissinger and US President George H W Bush – a former ambassador to China – also joined the negotiations. Yet Beijing allowed Fang to leave for exile in the US only after concessions were made to the Chinese side, such as a forced “confession” by Fang and a commitment by Japan to restart its loan program to the Chinese government.

A better explanation for the difference is that the structure of Sino-American relations has changed markedly over the past 23 years. When Fang entered the US embassy in 1989, China was far down the totem pole of US trading partners. Total US-China trade in 1989 amounted to around US$33 billion (in 2012 dollars) – only a bit more than the city of Hong Kong, and far behind the UK, West Germany, Japan and South Korea.

In the past, China and the US had used each other as a political counterweight to the Soviet Union. But by 1989 the Cold War was winding down, and both the US and China were cultivating friendlier ties with Moscow. After 1989, the US suspended high-level exchanges and trade programs with China and implemented economic sanctions. Diplomats on both sides could drive a hard bargain because there was simply less to lose.

When Chen entered the embassy this year, however, the calculus had changed dramatically. Trade between China and the US was about US$503 billion last year, more than 15 times higher than in 1989. China made up 13% of America’s total foreign trade, behind only Canada; the US accounted for 17% of China’s foreign trade, behind only the collective EU.

Today, the two countries have developed what some see as the world’s most important bilateral relationship, sometimes dubbed the “G2.” The fate of the global economy, climate change and military hotspots such as North Korea, Iran and Syria now hinge largely on their cooperation.

With so much riding on the relationship, the potential for damage to trade and global politics today is exponentially higher than during Fang’s time. Chinese diplomats likely calculated that the “cost” of worsening relations and an aborted high-profile visit were not worth the benefit of silencing a dissident. Put another way, regardless of personal appeals between diplomats, the same negotiators facing the same situation would rationally have made different demands in 2012 than in 1989.

That should bring more comfort than the notion that friendly interpersonal relations are the driver of smoother diplomatic ties. Diplomats come and go, and it is unlikely that chummy one-on-one relationships can be sustained forever. Having the right incentives in place is a much more reliable way to ensure strong diplomatic relationships.

Not every diplomatic wrinkle is likely to be ironed out as smoothly as the Chen case, and the risk of a serious rupture between the US and China remains. But as the countries develop an ever-more indispensible relationship, they are less likely to risk it all on a single roll of the dice.