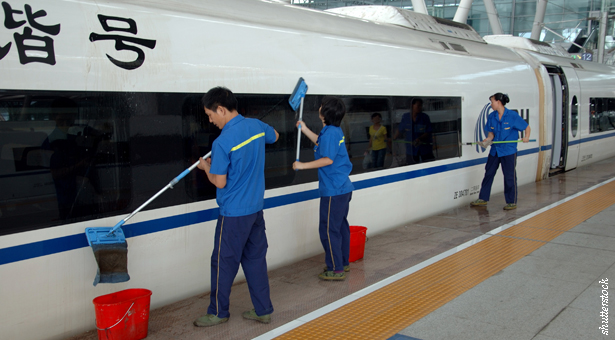 The reign of trains to set in as spending picks up

Economic challenges tend to elicit predictable responses from governments. China’s State Council just couldn’t resist pushing that familiar stimulus button on Wednesday to combat slowing growth, saying that it would speed up railway construction spending with a focus on central and eastern regions. It also raised the subject again of bringing private capital to a sector long controlled by the state. Investors responded warmly. At close of trade in Hong Kong on Thursday train maker CSR (1766.HKG, 601766.SHA) was up 2.26%. China Railway Construction (CRCC; 1186.HKG, 601186.SHA) and China Railway Group (CRG; 0390.HKG, 601390.SHA), which together control a dominant share of the inner-city railway market, had gained almost 2.74% and 1.55%, respectively. CRCC and CRG have seen a marked rebound in their share prices since early July as investors predict they will be the key beneficiaries of increased infrastructure spending, said Patrick Xu, a Hong Kong-based construction and engineering analyst with Barclays. Based on Wednesday’s statement, Xu forecasts that railway spending will grow 5-10% year-on-year through 2015. While in the longer term infrastructure spending will stabilize, Xu noted that in the long term more private capital in the sector could spur construction of branch and other additional railway lines.

Copping out on copper

The height of the summer has set in and talk of economic stimulus is in the damp, scorching air. Despite original signs that the government would hold out on boosting growth with cash, the State Council indicated this month that it will spend on select sectors. For now, that spending seems limited to the IT sector, energy-saving industries and railways. Social housing could get support later too. The announcement has prompted some speculation among copper traders concerning how far the spending will go. Since word escaped on the possible stimulus, the price of copper has been climbing, hitting US$7,076 per metric ton on Wednesday. However, Judy Zhu, a Shanghai-based metals analyst at Standard Chartered, said the current signals from the government indicate a moderate stimulus that will not result in a significant uptick for copper-hungry industries. “Right now I’m staying cautious. I don’t think there will be any direct impact on copper demand in the next few months,” she said. The price of the metal should see a rise in October, but that will primarily come from a seasonal boost in demand for housing and home appliances around a major national holiday. Investors should look for stimulus announcements relating to power distribution, home appliances and property, which would directly impact the demand for copper, Zhu noted.

Among the Chinese internet companies battling for market share in mobile, none have as clear a strategy as Baidu.com (BIDU.NASDAQ, B1C.FRA): Buy your way to success. The company has gone on a streak of major acquisitions including video streamers iQiyi and the PPStream (particularly strong on mobile phones) as well as the purchase of 91 Wireless, developer of two mobile app stores. The acquisitions already appear to be paying off. Baidu’s second-quarter earnings, released on Thursday, beat analyst expectations. That’s because higher-end consumers use PPStream, which helped drive a larger than expect rise in ad revenue in the second quarter, said Ricky Lai, analyst at Guotai Junan Securities in Hong Kong. Baidu may get a similar bump from 91 Wireless. “Because the company just acquired 91 Wireless, by exploiting the smart phone distribution platform, Baidu is able to expand its customer base in the smart phone market,” Lai said. But the company faces risks in its core line of business, online search on personal computers. Qihoo 360 Technology (QIHU.NYSE) has been gaining ground on still-dominant Baidu in that area for some time and is now in talks to buy Sohu.com’s (SOHU.NASDAQ, XOU.FRA) search engine. Nevertheless, with Baidu pushing ever more into new territory in pursuit of growth, the rewards may still outweigh the risks for investors.

Not much on the horizon for China IPOs in Hong Kong, not to mention in the US, which remains devoid of Chinese issues. The next IPO in Hong Kong is Tonly Electronics (1249.HKG) slated for August 14. The company is an electronics maker along the lines of Foxconn Technology Group, producing products that are then sold by major electronics brands. With a list of customers including Philips, LG and Toshiba, this issue could have some legs. As investors hang around and wait for more to enter the pipeline, they can at least take some solace in the fact that most of the listings in the past few months now sit above their IPO price.