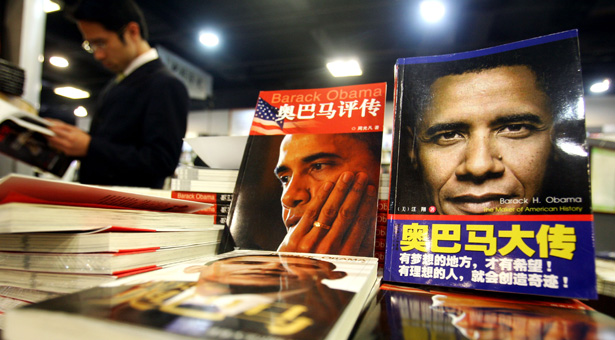 For a period that seemed to guarantee upheaval, this year brought remarkable continuity. Unlike its namesake disaster film, 2012 did not herald the end of the world. It did not even bring about dramatic political change: US President Barack Obama won four more years of power, while China’s new Politburo Standing Committee took the reins for at least five years.

Many watchers of Sino-US relations were no doubt relieved by the outcome. “Better to go for the familiar than the unfamiliar,” as the Chinese saying goes. Some might imagine Barack Obama and Xi Jinping congratulating each other on the phone after transitions in both countries came and went, reaching the consensus that their current policies for domestic and foreign issues should continue, at least in the short term.

But for many Chinese, this year’s dual transitions symbolized “an end as well as a beginning” and “renewal as well as change,” in the words of John F Kennedy. Chinese from different walks of life spoke with China Economic Review about the 2012 US presidential election and their attitude towards the US and Sino-US relations.

We sent a team of students to the US to cover the election on the ground, focusing on US university students’ participation in the election as well as the election in the eyes of the general public. However, here in China, people were more interested in entertainment aspects of the election than policy details. People did pay attention to China-related topics and talked a lot about whether Obama or Romney would be tougher, but they didn’t really care about issues like Medicare reform, education, women’s rights, abortion and gun control.

Most of the Chinese university students our team interviewed before they left for the US thought Obama should be the next president, the reason being that they were not familiar with Romney, and Obama has maintained a positive image since 2008. I personally expected Obama to win too. Romney, being a Mormon, expressed extreme views personally and politically.

Aside from the election, Chinese people now mainly care about the health of the US economy. That’s the focus of domestic media coverage. Some Chinese develop positive attitudes to the US from personal visits, and they admit there are things China can learn from the US. Yet whenever the US tries to distort, attack and take unfavorable actions against China, there will be this unanimous national pride that China is a powerful country and the US is in no position to say bad things about it. This social cohesion is apparent and has existed for a long time.

I don’t care much about the US election. The two countries have extremely close economic ties, and I feel like we are in the same boat. Frictions over political issues won’t stop, but they are secondary compared to our common economic interests. I feel that Obama has been largely friendly to China, but it seems to me that the diverging political structure of China and the US is the fundamental obstacle to the two country’s closer ties. Although I am Chinese, I think that Huawei being barred from competing for tenders in the US is understandable and a natural move for the US. There is no such thing as friendship between two countries.

I expect the next generation of Chinese leaders will continue to experience a smooth period of Sino-US relations. Their main goal is to improve the economy, and the last thing they want is diplomatic turmoil with another country.

If I got the chance, I would urge the new US president to learn more about the actual thoughts of Chinese citizens. The real visions of the Chinese people might be very different from the Chinese government.

Mr Zhao Lei, 35, deputy director of the Institute for International Strategic Studies of the Party School of the Central Committee of the Communist Party of China

The Chinese paid much more attention to the presidential election in the US than those in Europe and Asia in 2012, reflecting the growing interdependence between China and the US. Also, compared with the last two US presidential elections, Chinese were less concerned about the results than the whole electoral process. This probably signifies that Chinese are more confident about their country’s development and don’t think a change of president in the US will alter the big picture of the Sino-US relationship.

The American attitude has changed too. All three presidential debates avoided such sensitive issues as Taiwan and the Diaoyu Islands dispute, showing that the US now understands there is a certain inflexibility in exchanges between the two countries. Both countries now find it impossible to push forward with high-level global issues without each other. To enhance mutual trust, I believe both countries should try to depict each other with more positive language, learn to treat each other as equals, and, most importantly, not challenge each other on core national interests. For China, that’s national sovereignty and territorial integrity.

The Sino-US relationship can be affected by a lot of other factors, including how US allies in the Asia-Pacific region interpret US policies, especially when they are vague. Misinterpretations by allies such as South Korea, Japan and the Philippines could cause regional disputes that require the US to take stances or even actions that drive Sino-US relations in an unwanted direction.

The current president seems like he would be nicer to China than Romney would have been. Obama seems to be a little softer than Romney in terms of policies toward China. For instance, Romney claimed that he would identify China as a currency manipulator while Obama prefers a more stable foreign strategy.

America is the world’s superpower. China does a large amount of business with the US every day, and we are the largest foreign holder of US debt. So we are more like “frenemies.”

I may not know as much about the US election as I do about the 18th National Party Congress, but I think at least I know something. The election was in the news everyday recently, as I read China Daily and watched CCTV. I can’t say “which camp I am in” as there’s no need for me to officially take sides, but my opinion is that each candidate represents the interest of his own party, his own state and his own people.

Ms Andrea Liu, 27, an accountant in the financial industry in Shanghai (not pictured)

What will distinguish Obama’s next term from his previous one is, since he is largely no longer subject to the pressure of public opinion, he is likely to be more proactive and assertive. He has less to be concerned about domestically while making policy decisions.

Obama’s policy toward China in the first term made him look like a Republican. He has been highly practical and concentrates on trade issues primarily. For the next four years, I think Obama will shift more attention to Southeast Asia, as it will rely less on oil from the Middle East. The US will beef up its presence in the South China Sea and leverage its ties with South Korea and Taiwan to keep China in check.

I hope Obama can press China more on the issues of human rights and democracy that are in line with the traditions of the Democratic Party – not just in terms of China’s domestic affairs, but also concerning China’s attitudes toward global issues such as Syria. The president will need to offer both carrot and stick policies and maneuver between the two to prevent conflict.

I thought that Romney, a businessman who seems to know more about the economy, would be more popular given the current economy and thus had a bigger chance to win. But personally I like Obama more, as he is amiable and a minority elite, which makes him easier to identify with. He has developed a positive image over the last four years, and he has a lot of charisma. There was nothing significantly wrong with Obama’s policies; the economic slowdown is a global problem, not a result of his actions.

It was mostly younger Chinese people that were interested in the election. Older generations think the American way has no relevance in China, due to distorted domestic media coverage. The US, as I see it, is a world trendsetter – its economy, politics and culture have influenced many other countries. Most Chinese share my views, I think, though they may not say so openly. I think the US should continue to play the role of a world leader, as there are still a lot issues that need a global mediator.

The Sino-US relationship, as it is now clearly and rationally understood in China, is both competitive and collaborative. The two countries will naturally develop closer economic ties and will also experience more friction over controversial issues like territorial disputes.