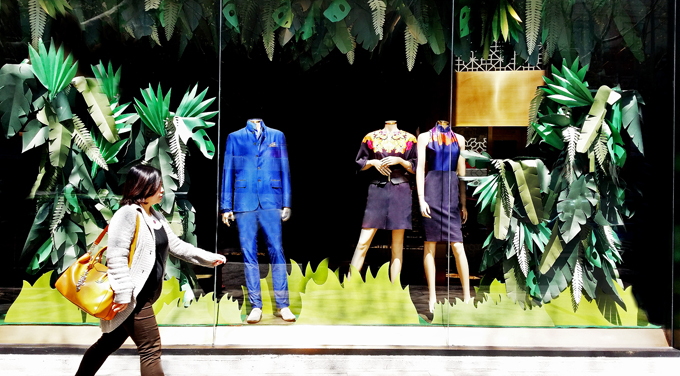 Luxury fashion is about gaining acceptance; what you wear and how you wear it is a projection of who you are as a person and how you want to be seen. The garments that fill your wardrobe are therefore heavily influenced by your social circle. Getting a professional office worker in Shanghai to sport a mandarin collar instead of necktie is no easy task – no matter how premium the product on offer.

The mandarin collar is low, unfolded and can be buttoned to fit snugly around the neck, conjuring the image of a Qing dynasty scholar. For less conspicuous wear, it can be unfastened into a V-neck as Raphael le Masne De Chermont, executive chairman of Shanghai Tang, a Hong Kong-based clothing company, prefers to wear it. Since the mid-1990s, Shanghai Tang has been known for its apparel with a strikingly traditional Chinese influence. For the past several years, however, as it bids for attention of wealthy Chinese consumers who disdain dragons on their jackets, the brand is remaking its image with a far lighter Chinese touch. The change in ideology is not without its challenges.

De Chermont refuses to wear neckties and demands others to take their’s off. “It’s the leash of the corporate animal,” he says on the sidelines of a luxury brand forum in Shanghai on March 22, before exhorting this reporter to unknot his own. As an ideological statement, Shanghai Tang does not sell neckties despite the huge mainland market for them. The decidedly Chinese collar isn’t just about comfort or fashion. It’s a cultural statement, playing ever so slightly on the sentiments of the country’s illustrious past while also hoping to sidestep the twinge of unpleasant moments in history. The brand is positioned at a confluence of national and fashionable confidence in China – whether it wants to be or not. Finding equal footing on this untrodden ground will be a challenge for De Chermont as the brand looks to capture a growing share of sales from mainlanders, of whom few today dare flaunt a mandarin collar.

Don’t dwell too long on the traditional Chinese elements of the brand, the chairman says. De Chermont’s pitch to the world as Shanghai Tang expands on the mainland and abroad is that the company sits at the forefront of “Chinese chic,” a representative of all that’s new in Chinese fashion, not a throwback to the past.

“We are not nostalgic. We are not going back. Some people think Shanghai Tang is all qipao, all changshan. It’s not,” he says, referring to two traditional Chinese outfits. The qipao is an embroidered vest worn by women; a changshan is a long button-up shirt once commonly sported by men in imperial China. “I dress in Shanghai Tang every day.” He couldn’t always, though. When Swiss holding company Compagnie Financière Richemont, which also boasts the likes of Dunhill and Piaget in its stable of luxury brands, took over the company in 1998 from Hong Kong tailor and businessman David Tang, De Chermont said Shanghai Tang was unsuitable for casual wear. The design looked like something out of ancient China. “Everything was too costume-y. It was like Western people dressing like Chinese,” he said. Chinese cringed at the sight; many were embarrassed to even set foot in the shops. At the time, the brand’s main customers were tourists passing through Hong Kong. Though finely crafted, Shanghai Tang’s shirts and jackets carried little more than souvenir value.

An advertisement from the 1990s shows a blonde-headed Westerner suspended midair in a kungfu-style kick, his Shanghai Tang jacket flying back behind him.

De Chermont has taken the brand far beyond those days; besides the mandarin collar, his dark blue coat has nominal Chinese influence. Still, the past is hard to ignore, especially for a company that calls itself China’s first – and possibly only – luxury brand. European luxury brands often tout their heritage, and Shanghai Tang, established in 1994 by Tang, traces its style to the vibrant metropolis of the 1930s after which it is named.

De Chermont described the Shanghai of that era as a colorful party where Eastern culture and fashion were running head on with the West. At the time, the city was carved up into concession overseen by various imperial powers. Many Chinese citizens were relegated to a small, poor area of the city but within the concessions an elite, international crowd enjoyed a lifestyle on par with London or Paris; the decadence was so full on that Shanghai acquired the unfortunate nickname of “Whore of the Orient” among party–loving Europeans. A burgeoning tailor business catered to the upper class and concentrated the most talented stitching knowhow in the country within city limits.

That ended abruptly with the communist takeover in 1949. “No more party; no more equality in the way you express yourself,” De Chermont says. The tailors fled to British-controlled Hong Kong as refugees and formed a tailors’ guild that, in some form, has survived among their sons and grandsons. David Tang was one of them. De Chermont estimates that Shanghai Tang employs up to 70% of those descendents today, giving the brand a strong claim to the legacy of China’s tailoring prowess.

The 1930s were an indisputably robust era for the city. Yet some Chinese historians refer to that time as being an important part of China’s “century of humiliation.”

That is a dilemma for the brand: Its heritage and the foundations of its style are rooted in a period of time that, in history books and in the heart of the country’s elder generation, is synonymous with ignominy. Shanghai Tang is trying to break away from notions such as these while at the same time retaining its story and heritage.

“China was not confident for a while,” De Chermont says. “They are the big players of the economy and will soon be the first. They have a lot to catch up. They don’t want people to remind them of their misery in the past.” When asked if Chinese people want Chinese characteristics in their clothing, he responds with an unhesitant “no.”

Perhaps the brand’s slogan “Re-orient yourself” is also its business model.

Shanghai Tang is doing well at ditching the past and in the same step attracting Chinese shoppers. In 2010, only 9% of sales came from mainland customers, according to figures provided by De Chermont. In 2013, that share had jumped to 22%. The gain in Chinese buyers comes at a crucial period for luxury brands on the mainland. China’s central government began clamping down on conspicuous consumption among party officials at the end of 2012 and the effects on international luxury brands that dominate the luxury segment have been profound. Bain & Co said luxury sales slowed from 12% annual growth in 2012 to just 2% last year; 2014 will likely see a similar slowdown.

Shanghai Tang has relished the backlash against graft, however. “It’s very good for us. We’re growing very fast. Much faster since the corruption campaign took place,” De Chermont said.

He claims that Shanghai Tang is “politically correct.” As a Chinese brand, it has moved under the radar of the corruption crackdown, avoiding the characterization as European luxury. Price also comes into play. Shanghai Tang costs less than its European peers. During the corruption crackdown, lower-cost luxury and premium brands have taken in solid growth as China’s anti-graft watchdog has sought out the officials in pricey Hermes blazers.

The crackdown might be one trend that has boosted sales at the company but there are others changes in the economy that Shanghai Tang has yet to leverage.

Luxury sales in second-tier cities in China are booming. In fact, consultancy McKinsey said last year that sales in these cities are driving luxury consumption on the mainland. As shopping malls fill with Western brands in cities such as Chongqing, Chengdu and Harbin, Shanghai Tang’s presence there is still “little,” De Chermont says. That’s understandable. Chinese brands in these markets wi
ll likely be at a disadvantage for now. While luxury consumers in China’s first-tier cities are increasingly sophisticated, often shopping for subtler designs without large labels, buyers outside of Shanghai, Guangzhou and Beijing still want to show off. They appraise products based on price and want friends to know they can afford expensive European brands. A Chinese brand may not suffice in impressing colleagues, at least until consumers in those areas become more refined.

Shanghai Tang does have shops in several second-tier cities but they are in airports, catering to the same travel retail crowd as a decade ago.

That’s just one more challenge in being a Chinese luxury brand. Shanghai Tang is still mulling how to leverage its heritage and tradition – which cultural characteristics to highlight and which ones to totally forget. That could very well determine its success or failure on the mainland.