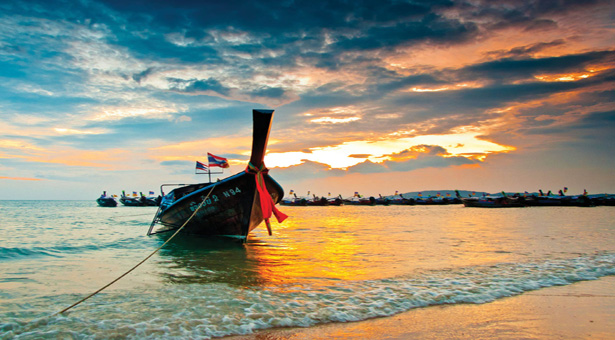 With growth slowing, China can use all the positive economic news it can get. The state visit from Thai Prime Minister Yingluck Shinawatra in April seemed to fit the bill, coming just days after China announced that first-quarter GDP grew at the slowest pace since 2008. Yingluck and Chinese Premier Wen Jiabao announced that their countries were targeting a hefty 20% annual increase in bilateral trade for the next five years.

China’s state media thoroughly covered the pomp and circumstance of the visit but largely overlooked how difficult the trade target may be to reach. Thailand in particular has its work cut out: In the first five months of the year, Chinese exports to Thailand increased 22%, but Thai exports to China declined by 2%.

If these trends continue, Thailand will face a difficult transition as it struggles with reduced demand for its exports, both from China’s consumers and export industries. “There has to be a period of adjustment, and it’s probably going to be a painful period of adjustments,” said Bala Ramasamy, a professor of economics at the China Europe International Business School.

But while Thai export growth to China shows signs of slowing, some analysts see a bright side. Although roughly half of Thai exports feed China’s export manufacturers, other products – food, tourism and rubber, for example – meet the demands of Chinese consumers. If China’s economy comes to rely more heavily on consumption, and less on investment and exports, Thailand could weather the slowdown better than many resource-dependent Southeast Asian nations.

Although a clear picture of the effects of China’s slowdown on the region has yet to emerge, one thing is certain: China’s rebalancing will require Thailand to strike a new balance itself.

An economic transition in China could upset more than a decade of growth in Thai exports. Since the end of the Cold War, Chinese-Thai economic relations have steadily improved, with each country sending regular missions to promote trade. In the last decade, Thailand recorded double-digit export growth in all but one year.

China now consumes roughly 12% of all Thai exports. Semi-finished electronic components, mostly destined for final assembly in China, make up the largest share, accounting for one-third of Thailand’s outbound trade to China. Outside of electronics, Thailand is the world’s largest exporter of rubber and supplies about 1 billion tons of the commodity to China, mostly to make tires for commercial and passenger vehicles.

Food products – such as fruits, vegetables, rice and sugar – make up less than 10% of overall exports, but trade is growing steadily as Chinese incomes and appetites grow beyond what can be accommodated domestically. Chemicals and wood also make up small but significant portions of Thai exports to China.

Chinese tourism in Thailand has also grown rapidly, although this “invisible” export is not recorded in the official trade statistics, said Santitarn Sathirathai, a Singapore-based economist for Southeast Asia and India at Credit Suisse. About 1.7 million Chinese tourists traveled to Thailand last year, a 56% increase from 2010.

China’s slowdown is threatening the sustained growth of these exports. The country’s GDP growth in the first quarter was 8.1%, and most economists expect full-year growth to be around 8%, if not lower. China’s exports have continued to grow, but year-on-year growth slowed to as low as 4.9% in April before rebounding somewhat in May.

The effects are already visible in Thailand’s trade figures. Thai exports to China shrunk year-on-year in December for the first time since 2009, and outbound trade has been inconsistent since then, with exports to China declining in three of the first five months of the year.

To understand Thailand’s faltering exports, one must look to China. The roots of China’s slowdown are two-fold: Government restrictions on property purchases have nearly brought the housing industry to a halt, while at the same time growth in Chinese exports is slowing. The condition of China’s housing sector will likely have a limited effect on Thailand’s economy, as building materials such as wood and cement make up a small portion of exports.

That’s because Thailand is a major link in the global supply chains of many multinational electronics manufacturers. Semiconductors and other high-tech components are often made in Japan, Korea and Taiwan, sent to Thailand and other Southeast Asian countries for partial assembly, then shipped to China for final assembly before being exported to consumers in Western markets, Ramasamy said. If fewer people buy electronics in the US, every step on the supply chain is affected.

Unlike 2008 and 2009, the culprit this time is the economic crisis in Europe rather than the US. Unless the European debt crisis is solved soon, Ramasamy predicts Thai exports to China will contract outright as a result of declining European demand. “The ripple effect, in this case in the manufacturing sector, is going to be quite hard,” he said.

Although China’s miraculous growth has been driven by investment, many economists say China must now switch to a consumption-driven model. But such rebalancing is easier said than done.

“China hasn’t really tapped into the consumer market,” said Napatra Charassuvichakanich, an associate at Strategy613, a consultancy that specializes in Thailand-China investment.

Chinese household spending as a share of GDP has declined from 47% in 2000 to 39% in 2011, according to data from the World Bank and China’s National Bureau of Statistics. While consumer spending grew in absolute terms during that period, it did not keep pace with growth in investment spending. In this respect, a slowdown in exports and housing construction means the share of GDP growth generated by consumption will rise.

Thai manufacturers of consumer products, such as electronics, auto parts, jewelry and tourism, could market their products to Chinese customers to make up for weak demand in US and Europe. “If [China] is successful in converting toward more consumption-driven demand, you would imagine a lot of the export from Thailand might benefit,” said Sathirathai of Credit Suisse.

More broadly, Southeast Asian countries that have developed consumer economies will likely outperform the rest of the region as the Chinese economy rebalances, Sathirathai said.

Malaysia and Indonesia have grown faster than most Southeast Asian countries during the past five years as China’s rapid industrial growth drove demand for their raw material exports, including coal, tin and palm oil. As China’s manufacturing growth declines, however, Sathirathai expects this trend to flip, and the more diversified economies of Thailand and the Philippines will outperform.

But Ramasamy of CEIBS has different expectations. He said Chinese spending growth is unlikely to be passed along to Thailand. Thai electronics going to China are mostly used by multinational companies for export to the West, but Chinese electronics manufacturers that target domestic consumers mostly buy components from other Chinese suppliers. By contrast, Thai exports of rubber to China will likely continue to grow so long as the Chinese auto industry grows.

Yet even without the boost from consumer exports to China, Thailand will fare better than most countries in the region, Ramasamy argued. Following China’s lead, Thailand could focus more on promo
ting consumption than exports, he said. Thailand’s economy is more developed – with household spending making up more than 50% of GDP – than most of its neighbors in Southeast Asia.

Prime Minister Yingluck has already taken further action to stimulate consumption by pushing to raise the minimum wage and invest in social programs. As with China, a shift to a consumer-driven economy in Thailand would not immediately make up for declining exports, but the move could help ensure the long-term health of the economy.

Beyond predictions on the volume of trade, the fundamental nature of trade between China and Thailand is likely to change in coming years. While the two countries could potentially collaborate in new areas, some manufacturing industries will grow more competitive, especially those that are competing for waning US and European demand. In the electronics sector, for example, China has been moving into more mid-range manufacturing that directly competes with Thailand, said Johannes Lund, an analyst covering Southeast Asia at consultancy Control Risks.

But opportunities for China and Thailand to collaborate will also grow. The two countries could further develop trade in services – Thailand in tourism and China in infrastructure construction or finance, for example.

Industrial and Commercial Bank of China has already acquired Thailand’s ACL Bank for US$550 million, said Zhou Ning, a senior associate at Strategy613. Cross-border acquisitions in both directions could increase as global growth slows and company valuations decrease, Zhou said.

Such collaboration is likely ensure that trade between the countries continues to grow, even if Thailand and China manufacturing grow more competitive. “It’s not a zero sum game,” said Johannes Lund, an analyst covering Southeast Asia at consultancy Control Risks.

“Both countries are likely going to benefit and deepen their economic ties. But who benefits more? It’s hard to say.”