Home Business Shoppers to the rescue 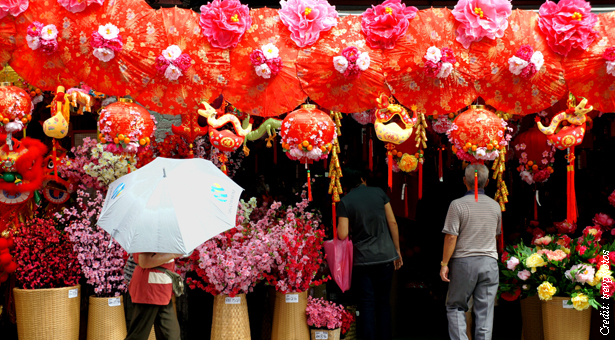 Shoppers to the rescue

Stodgy Americans often lament that Christmas has gotten away from its roots and grown too commercial. But in China, you won’t here any such complaints about their most important holiday, Spring Festival. Lunar new year is traditionally a time for China, a long-time agrarian economy, to celebrate making it through another tough winter. And that means splurging, whatever the budget – whether it’s buying pork dumplings for the family meal or a diamond-encrusted watch for your local party cadre.

To the disappointment of many investment bank analysts, retail sales only grew by 14.7% during the seven-day holiday, compared to the equivalent holiday period in 2012. That’s the slowest rate since 2009 and a decline from 16.2% for Spring Festival 2012. But don’t jump to conclusions that this is a cause for gloom (as stock traders did immediately after China announced the statistics). There’s more at play in these numbers than just consumer sentiment.

The timing of Chinese New Year in 2013 helped sales in certain retail segments while hurting those in others. Citi noted in a report last week that the holiday fell during a major crackdown on “lavish receptions and banquets,” contributing to modest 9.8% growth of food sales and 11.2% growth for beverages. (Although that crackdown has coincided with a campaign on official gift giving, luxury sales outside of expensive liquor have largely been resilient.) Valentine’s Day also fell during the holiday, driving up jewelry sales 38.1%.

These factors indicate little about consumer sentiment for the year to come. Valentine’s Day was a mere coincidence, and the official crackdowns are likely a one-time blow to sales as the market adjusts to the new policy or Beijing eases the campaign after the National People’s Congress in March.

Carl Weinberg, chief economist at High Frequency Economics, in a note last week went so far as to argue that the numbers should be ignored. Lower inflation could account for the slower growth of headline retail sales figures as the consumer price index fell to 2% last month, less than half what it was in January 2012, Weinberg wrote. In other words, even if Chinese bought the same amount of mandarin oranges, firecrackers, baijiu and other items in 2013 as they did in 2012, slower price rises in the months leading up to Spring Festival 2013 resulted in lower growth of total renminbi spent.

Bank of America Merrill Lynch similarly noted that, accounting for inflation, Spring Festival retail sales growth was likely the same in 2012 as it was in 2013. Weinberg advocates waiting for the January and February combined data release on March 9 to examine the longer term trends in consumer spending.

The holiday figures shouldn’t be ignored entirely, but these numbers are best considered in light of longer-term trends. To any normal person – in other words, not an investment banker – 14.7% is an astonishing rate of growth. Such growth is doubly astonishing coming off of a tough year for the Chinese economy, when GDP growth dipped to a low of 7.4% in the third quarter.

The economy should be stronger in the year ahead, especially consumption. Bank of America Merrill Lynch predicts that consumer spending growth will reach 15.2% in 2013 up from 14.3% in 2012. That growth is mostly driven by continued double digit rises in income per capita as demographic shifts shrink the workforce .

Consumer friendly policies could further boost spending if the government launches subsidies for big ticket consumer products like cars or appliances, as some predict, or if it follows through on its plans to narrow the income gap. If these measures do take hold and wage growth continues, Chinese will likely be buying both more dumplings and more diamond-encrusted watches come Spring Festival 2014.