Home Banking & Finance Will the Snowden effect that hit Shenzhen spread to HK? 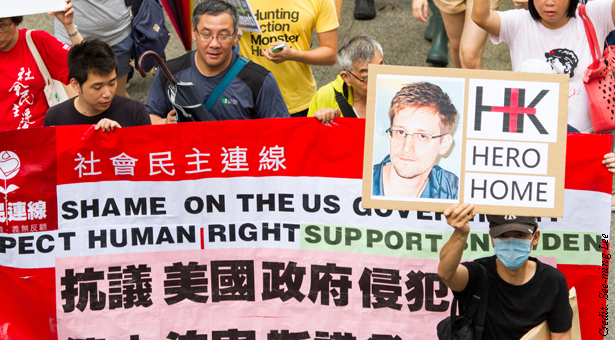 Will the Snowden effect that hit Shenzhen spread to HK?

Edward Snowden, the renegade ex-CIA worker who has holed up in Hong Kong with reportedly all sorts of US security secrets, is moving more than just the bowels in Langley, Virginia. When Snowden revealed last week that the US has been habitually spying on people in Hong Kong and China, stocks at Shenzhen-listed internet securities firms shot up on the potential for greater demand for their products and services. Surfilter Network Technology (300311.SHE), for one, rose 6% on Wednesday. For investors who don’t have access to mainland exchanges, the question is whether or not similar Hong Kong-listed firms will see such a trend. The answer is no, according to OSK Securities analyst Billy Leung, who follows Hong Kong-listed software firms. “The sentiment might be there for one or two days, but in the long term [the Snowden case is] not going to be driving things forward,” Leung said.  There are several significant mainland software companies listed in Hong Kong that deal in internet security devices, Kingsoft (3888.HKG) being one prominent example. But it’s unlikely those companies will sell to the government, according to Leung. The movement in Shenzhen was most likely spurred by speculative retail investors. So the main message to antsy tech-stock investors looking for a play is: Don’t get bogged down in this snowstorm, especially not on a sweltering Hong Kong afternoon in mid-June.

US shares in Cnooc (CEO.NYSE, 0883.HKG) rose 4.2% on Monday, a bump that’s just about the best news shareholders have gotten all year. The company’s Hong Kong shares saw a similar increase. But why the rise after sinking some 20% so far this year? Australia did dole out offshore oil exploration permits to companies including Cnooc, which Bloomberg would imply caused the swell. One analyst, not authorized to speak to the media, begs to differ. “I don’t think that’s the driver, I think it’s more around oil [prices],” the analyst said. The impact will be “very small” on Cnooc because “you’re not going to see new oil or gas out of whatever has been auctioned off until the better part of the end of this decade.” Cnooc’s stock price instead has merely tracked the price of oil, with bullish hedge fund managers bidding up the benchmark Brent Crude Index by roughly US$3 to US$106 on Monday from its price the previous week. The hedge fund managers have apparently since backed off with the price falling US$1.50 as of late afternoon Thursday in China. As would be expected, Cnooc’s Hong Kong shares fell more than 4% by market close Thursday. So barring some sudden regulatory change in the tightly controlled mainland energy market, it would appear that betting on Cnooc is just about the same as betting on the oil price. Investors going down that path might also want to consider futures in rabbits’ feet and four leaf clovers.

The rough side of stability

China’s property market is hot. So hot that renewed government attempts to splash cold water on it just generate steam. Why then did news of the fastest growth in home prices in nearly two years in the country’s biggest cities send Chinese property developers sliding in Hong Kong? Evergrande Real Estate Group (3333.HKG) and SOHO China (0410.HKG) were both down as of Thursday afternoon, owing much of the loss to the specter of further policy measures Beijing might employ if the ones enacted in March don’t seem to be working. China Vanke (200002.SHE) and Poly Real Estate (600048.SHA) both lost on the announcement as well. The worries that drove these companies down could be overblown. “At the moment, the government looks very reluctant to introduce any cooling measures on the property sector in light of the downward pressure from economic growth,” said Johnson Hu, a property analyst at CIMB, a Malaysian bank. In that sense, disappointing economic figures could keep the government from clamping down on price growth. Investors in Chinese property developers should actually be wary of economic stability because that’s when Beijing will push out new policies. For now, sales at the biggest companies are in line with expectations, Hu said. “I foresee most of those developers achieving their sales target for this year.”

Gamblers might take a chance on Macau Legend Development (1680.HKG) that will look to raise US$77.4 million (HK$600 million) when it floats next Thursday. Legend owns several assets in the territory, including the Pharaoh’s Palace Casino. Given the more than 13% growth in gaming revenue for Macau in April, this stock could be more than a crap shoot. A day earlier, Freetech (6888.HKG), a Hong Kong-based firm that sells asphalt maintenance equipment, will look to sell US$111.2 million in shares. The IPO is several times oversubscribed. However, investors should remember that China’s infrastructure boom days are coming to an end. Freetech will have to hope that China is interested in keeping its roads in good shape. Both IPOs are shadowed by an overall lethargic securities market in Hong Kong. China Galaxy Securities (6881.HKG), which raised US$1.07 billion and rose from its listing price in late May, has stumbled on what some analysts have called poor market sentiment. The company was trading just below its IPO price of HK$5.30 late Thursday.