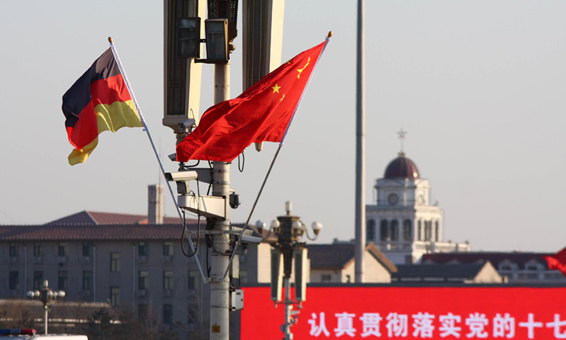 Pundits have conferred the title of “special relationship” on more than a few international interactions, and this year China and Germany can be added to the list. In May a paper by the European Council on Foreign Relations argued that the two countries have grown closer thanks to “an almost perfect symbiosis” of German technology and Chinese consumer and production markets. Closer economic ties might soon lead to closer political ties as well, the authors speculated.

The Chinese and German economies have certainly become more intertwined in recent years. German companies produce much of the construction equipment, machine tools and other industrial machinery needed to make investments in China like factories, residential homes, high-speed trains and highways. That dynamic worked well during the boom years, but now China’s sagging growth threatens to drag Germany down with it.

The global economic downturn sapped demand for German goods in the US and other European countries, but economists say China’s investment-driven stimulus has picked up the slack and contributed to Germany’s recovery. Today around 7% of all German exports go to China, which contributed around 0.5% to Germany’s GDP in 2011, according to estimates by the bank UniCredit.

Yet if growing ties with China pulled the German economy up, might it also drag the country down? Joerg Kraemer, chief economist at Commerzbank, noted the dangers of China’s slowing economy when he warned clients in a recent note that “things will go down from here” for Germany. China’s GDP growth has dropped from nearly 10% at the end of 2011 to just 7.6% in the second quarter. Investment growth is slowing sharply, as are imports.

China’s slowdown will hit commodities-driven economies such as Brazil and Australia the hardest, argued a report from the International Monetary Fund (IMF) in July. But its effect on even the large and diversified German economy will “not [be] trivial.”

Lower investment in China would not only lead to sagging demand for German construction equipment and industrial machinery. The knock-on effects could also lead to slower growth in other countries that buy German goods as well, thereby amplifying the downturn. In all, the IMF calculates a 1% slowdown in investment in China’s real estate sector could shave around 0.6% off Germany’s GDP. For a country that recorded paltry GDP growth of 0.1% in the second quarter, that could mean the difference between a recession and a recovery.

Down but not out

For example, German chemical giant BASF warned in July that “the Chinese growth engine has started to stall, leading to a decrease in BASF’s sales [in the country].” The same month Siemens reported orders had fallen 23% in its financial quarter from April to June, due in no small part to China, which accounts for around 8% of the conglomerate’s total sales.

“In the business of rail and energy technology, there are no significant developments [in China],” Peter Löscher, the company’s president and CEO, said in an interview in July. “Major orders from China are rare. That trend will continue at least until the end of 2012.”

But the pain is not being spread evenly. Retail and consumer sales have fared better than construction and industry. The story for German firms operating in these areas seems to be that growth is slowing but remains strong. For example, German sportswear maker Adidas reported that sales in China during the second quarter of this year had cooled significantly from the first quarter, but remained at a buoyant 13%.

Or take the automobile sector, where passenger car sales rose by 11% in July despite broader economic growth in the middle single digits. That has helped keep the bottom lines of many German carmakers in the black. That is particularly true in the premium market, where German firms such as Daimler, BMW and Mercedes-Benz account for nearly 80% of car sales in China.

The situation could change if Beijing pushes through another stimulus package, which seems increasingly likely. More infrastructure projects and liquidity sloshing around the economy might provide some temporary relief for German construction equipment and machine tool exporters. But there’s no disguising a general downward trend.

If China’s slowdown accelerates, the Sino-German relationship might become special for all the wrong reasons.