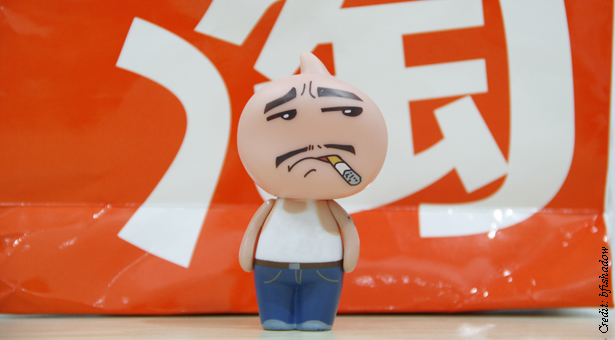 In a restaurant in Shanghai’s Jing’an district, clientele exchange stories in throaty northern accents and use straws to suck the marrow from slow-cooked pig’s trotters. Faded Chinese New Year messages and jars of white liquor with snakes curled up inside them sit by the cash register.

The restaurant belongs to a popular chain serving Dongbei, or northeastern, food in Shanghai. But despite the chain’s commercial success, the manager is reluctant to give customers fapiaos, or the tax invoices that should be available with every sale in China. When he finally grudgingly hands over a slip of paper, it is for a slightly higher amount and is printed with the name of a clothing company.

Sales tax evasion is rampant in China. Chinese authorities have succeeded somewhat in forcing businesses to print fapiao by including a scratch-off section at the top of the invoice that gives customers the chance to win small amounts of cash. This encourages people to ask for invoices, and when restaurateurs or shop owners print the invoice off the government-issued machine, the total is automatically reported to the tax authorities.

But while this tactic forces some shops and restaurants into tax compliance, China’s rapidly growing e-commerce industry still exists in a gray area. Chinese consumers who buy cheap goods from popular websites like Alibaba’s Taobao.com rarely receive invoices with their purchases.

The issue came to the fore at China’s National People’s Congress in March, when Wang Tian, the chairman of the Better Life retail chain, complained that online shops operating on Alibaba’s e-commerce platforms dodged US$5.6 billion (RMB35 billion) in taxes last year, a substantial portion of the more than US$16 billion (RMB100 billion) in taxes avoided by the entire e-commerce industry. (Taobao refuted Wang’s claims, saying that 94% of the stores on its platform made less than US$38,000 annually (RMB240,000) and were therefore not subject to tax.)

That may soon change, however. In early March, China’s State Administration of Taxation released new regulations, effective April 1, for implementing online invoice management systems. Many analysts believe these systems, which automatically send information to the tax authorities, are smoothing the way for taxing the e-commerce industry.  The regulations require all websites to issue invoices to customers who ask for them, though they stop short of mandating that invoices be issued for all purchases.

The burden of taxation would not fall equally on all segments of the industry. Taxes would have a far bigger effect on “consumer-to-consumer” (C2C) sites like Alibaba’s Taobao.com, a site similar to eBay in the US where consumers and small businesses sell their products. In contrast, China’s major “business-to-consumer” (B2C) sites – sites that more closely resemble Amazon, like Dangdang, 360buy and Alibaba’s Tmall – are already relatively tax compliant.

The taxes are likely to particularly hurt Taobao.com, which holds around 95% market share in the C2C market. The platform is home to about 7 million vendors, mostly small companies. Many of these sellers “gain some competitive advantage by not paying taxes, and if they are required to pay taxes they might not be able to stay in the game,” said Mark Natkin, managing director of Marbridge Consulting, a Beijing-based telecom and IT advisory firm. “Either they would lose all of their profit margin, or they would find it too much of a burden to implement the systems and the record keeping required to do it.”

The million-dollar question is exactly how big of an impact taxes would have on Alibaba’s revenue. Analysts had widely predicted that Alibaba is preparing for an initial public offering in Hong Kong that will value the company somewhere between US$55-120 billion. The strict implementation of taxes in the e-commerce industry could reduce that valuation.

The precise effect on Alibaba’s revenues would depend on how much the taxes reduce store spending on advertising, since the bulk of Taobao’s revenue is generated by vendors buying pay-for-performance advertising within the Taobao search function that directs shoppers to their individual store, Natkin said. For example, if a shopper searches Taobao for “mobile phone,” ads for stores that have paid Taobao to be associated with that keyword appear on the right-hand side and at the bottom of the page, similar to search engines like Google or Baidu. Stores that pay more in taxes might have less money to pay for this advertising. But without knowing how widely taxes will be implemented, the effect is impossible to determine.

One thing seems certain, however: Implementing these taxes is sure to take a while. Ensuring compliance among Alibaba’s millions of small store owners is a gargantuan task, and Alibaba has likely complained to relevant authorities that the cost would be prohibitive.

Instead of relying Alibaba to police its platform itself, a much more logical approach would be for the tax bureau, public security and other authorities to first develop a clear system for identifying the owner and operator of individual stores, Natkin said. Then the authorities can pursue tax dodgers themselves. There are signs authorities are moving gradually in this direction, with B2C e-commerce site 6695.com recently reporting that it is testing mechanisms for verifying the identities of its online store operators.

If implemented, sales taxes will take a toll on Taobao’s business and the e-commerce industry more broadly. Given the scale of the necessary operation, however, Chinese vendors likely still have a few years before the tax authorities come knocking.