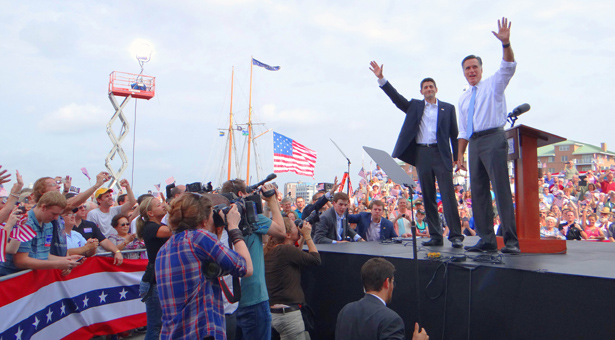 “Fewer Americans are working today than when President Obama took office. It doesn’t have to be this way if Obama would stand up to China,” a man’s voice says as the camera pans past broken warehouse windows.

With vague language and stark imagery, the 30-second campaign ad for Republican presidential candidate Mitt Romney conflates America’s economic stagnation with Obama’s failure to “stand up” to devious Chinese practices. “Seven times Obama could have taken action,” the ad says, referring to the US Treasury Department’s semi-annual review of currency practices. “Seven times he has said no. His policies cost us 2 million jobs.”

Obama has fired back with his own campaign ads charging that private equity firm Bain Capital shipped jobs off to China under Romney’s direction. Both candidates claim that China’s unfair tactics have damaged US businesses, lifted unemployment and helped to boost the US trade gap with China to a record US$295.5 billion in goods in 2011.

Listening to this rhetoric, it seems that the continued fallout from the financial crisis has rung in a new era of economic conflict. China’s currency continues to be a subject of debate. The Obama Administration has brought more major trade actions against China in the WTO than any previous administration, launching complaints over auto parts, solar cells, credit cards, chickens, rare earths and even kitchen sinks.

However, a closer look shows that punitive actions by the US against China are not nearly as wide-ranging or as beneficial as the candidates purport them to be. Furthermore, their bombastic claims may be putting the world’s most important bilateral relationship at risk.

“US-China relations are very troubled, for reasons that partly have to do with the economy and partly have to do with security,” said Tom Wales, deputy director of analysis for Oxford Analytica, a global advisory firm. “As long as things remain economically tough in both countries, you’re going to have this kind of friction.”

The flurry of trade complaints the Obama Administration has launched against China are not without merit. “It rather depends on the company and the industry, but in general, Chinese companies do get much more significant subsidies, direct and indirect, than US companies receive,” Wales said.

The US also subsidizes its businesses, of course, but it does so mostly in line with WTO rules – for example, offering income tax breaks for people or companies that buy domestic solar products, rather than offering its solar companies direct subsidies like soft loans and grants.

Lower-income countries like China have more difficulty following WTO regulations, since the rules were written by and for high-income countries, said Yukon Huang, a senior associate at the Carnegie Asia Program and a former World Bank country director for China. For example, China has trouble subsidizing its solar industry through tax breaks because many Chinese underreport or do not pay income tax. Of course, as a WTO member, China must still follow the rules or pay the penalty, Huang added.

But while trade cases against China may be valid, they are unlikely to do much to revive the US economy. Take the Obama Administration’s latest measure: Obama announced in late September in Ohio, a swing state and a major auto parts producer, that the US would bring a WTO case against China for providing US$1 billion in illegal subsidies to auto parts exporters between 2009 and 2011.

The US auto parts sector has suffered in recent years; employment in the sector fell roughly 50% between 2001 and 2010. But that’s more likely due to massive increases in productivity in the industry than foreign competition, said Wales of Oxford Analytica.

China is not even the major source of competition for the US auto parts industry. China’s share of the US import market rose from 1.6% to 9.3% between 2001 and 2010, according to Oxford Analytica, but the country continues to lag behind Japan, Canada, Mexico and Germany as a supplier of auto parts to the US. And rapidly rising wages within China mean that its auto parts factories are becoming less competitive.

“[Obama’s] action, particularly its timing, is 100% politically motivated, [and] it’s just a very small gesture,” said Ian Fletcher, senior economist at the non-partisan Coalition for a Prosperous America. “The US has been firing more complaints recently, but the thing that people tend not to understand is that these specific complaints are a very small part of the overall trading relationships.”

By some measures, the US-China relationship is not even America’s most embattled. As a proportion of total trade volume, disputed cases between the US and China are much smaller than those between Canada and the US or India and the US, said Li Chunding, an assistant researcher at the Chinese Academy of Social Science’s Institute of World Economics and Politics.

Another source of popular misconceptions is the rhetoric surrounding China’s currency. While many Chinese now argue the renminbi is close to its real value, critics (many in the US) charge that China still undervalues its currency by as much as 20-30% to subsidize its exports and raise the cost of imports.

Romney criticizes Obama for failing to right this perceived wrong, and he has pledged to label China a currency manipulator “on day one” of his presidency. He is not alone: Democrat Chuck Schumer led the Senate in passing a bill that would impose an across-the-board tariff on any country that is labeled a currency manipulator, though the bill was later voted down in the House of Representatives.

But it’s far from clear that China deserves to be singled out as a currency manipulator. The country does control the value of its currency, allowing it to fluctuate within a narrowly set band, but analysts say China is by no means the only offender, and perhaps not even the most egregious.

Kenneth Lieberthal, the director of the John L. Thornton China Center at the Brookings Institution, calls the currency manipulator label “gratuitous” (see full interview on page 31). The label would primarily trigger a series of negotiations with China, and “we’ve done that every day with China for years. So this is a distinction without a difference.” The main purpose of labeling China a currency manipulator would be to take a humiliating swipe at the country, Lieberthal said.

Some, like He Weibao, a researcher at the Chinese Academy of Social Sciences’ Institute of American Studies, worry that this would invite Chinese retaliation in the form of a trade war.

Because the US business community – including many Romney backers – is wary of that prospect, some speculate that Romney would be unlikely to follow through on labeling China a currency manipulator if he is elected. The US-China Business Council has registered its opposition to the plan, and Bloomberg cited one unnamed Romney advisor as saying that all of the candidate’s top advisers also disagreed with Romney’s decision.

“Basically every US political challenger since 1992 has accused the incumbent party of being soft on China on trade and in more recent years the currency valuation issue,” said Wales of Oxford Analytica.

“And yet every party when they get into office soon realizes the size of the US-China trade relationship, [and] that they can’t afford an all-out trade war with China.”

Furthermore, these “tough on China” policies are unlikely to brin
g jobs back to the US or have much effect on the looming US trade deficit. While the deficit with China is by far America’s largest, the US imported more than it exported with 11 of its 15 largest trading partners in 2011.

Besides, much of the US-China trade deficit results from higher-value components from countries like Japan, South Korea and Taiwan passing through China for assembly on their way to Western markets, argues Huang of Carnegie.

Huang illustrates this with the example of the Apple iPad, which retails for roughly US$650 in the US. Of that sticker price, Apple takes in about US$300 in revenue, while about US$250-300 of the total value goes to manufacturers of the iPad’s high-tech components in countries like South Korea, Japan and Taiwan. Only about US$15 is absorbed by China to pay for the labor that is used in assembly. Yet the total value of the product is recorded in the US-China trade deficit.

The result is that the US-China trade deficit balloons, and the US-South Korea and US-Japan trade accounts appear more balanced. If US politicians really want to reclaim jobs, they would be much better off focusing on the higher-tech manufacturing jobs of their closer Asian allies than on the low-wage assembly jobs of the Chinese, Huang said.

“Those workers in Taiwan, South Korea and Japan are being paid US$30,000, US$40,000 per year,” Huang said. “Those are the kinds of jobs that you could reasonably ask, why aren’t Americans producing these things?”

This situation is slowly changing as Chinese wages increase and low-wage assembly jobs move across the border to Southeast Asia. Just as US politicians previously censured Japan and the “four Asian tigers” (South Korea, Hong Kong, Taiwan and Singapore) in past decades, the US may shift its focus in the future to criticizing Vietnam or Cambodia as they generate larger trade surpluses, said Li of CASS.

US political rhetoric may not be well grounded in facts, but it can still have practical consequences. Analysts worry that the contentious political process could add to already widespread mistrust between the countries.

Due to the rapid spread of the internet, Chinese are more exposed to the US political process now than in any election in the past. Chinese official newspapers regularly take the candidates, especially Romney, to task over their “irresponsible” and “foolish” comments. “It is advisable that politicians, including Romney, should abandon … short-sighted China-bashing tricks and adopt at least a little bit of statesmanship on China-US ties,” state-run Xinhua News Agency wrote in an editorial in mid-September.

Chinese also worry that US posturing will damage the image they are trying so hard to improve abroad. Anti-China rhetoric in the election will undoubtedly influence people’s views towards China, potentially harming relations, said He of CASS. Perhaps most importantly, China-bashing gives leaders in both the US and China less scope to concentrate on important international and domestic issues, such as reviving their economies.

Admittedly, the real nature of the US-China economic relationship is difficult to capture in a 30-second sound bite. But if US politicians want to revive their economy, they need to try.