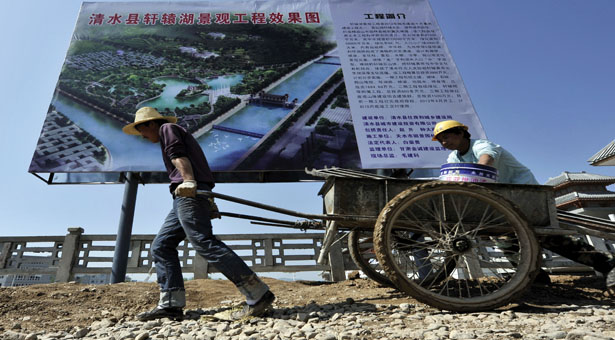 Turning on the heat

One of the most memorable business meetings I’ve had in China occurred one winter in Chongqing. I don’t remember what was discussed, but I do recall how cold I felt as I sat listening to my Chinese host. I sipped at a flimsy plastic cup of hot water to try to keep warm. My host posed nonchalantly in a quilted coat, a cup of tea in hand. There was no heat coming from the refrigerator-sized heating unit in the corner, or from any other part of the office. Young professionals sat huddled at their desks, typing away in coats and scarves.

The experience is still typical of money-saving approaches in China’s commercial and residential buildings, which leak energy with abandon. Increasingly, however, families and businesses are turning on their heating and cooling, if only during the coldest or hottest months. New hotels, shops and restaurants are springing up in cities, while in rural areas daily energy consumption per capita nearly doubled in the seven years after 2000. Those numbers are adding up to make China one of the world’s largest and least efficient energy consumers.

The average energy efficiency in Chinese buildings is relatively low, at about 50%, Li Bingren, chief economist of the Ministry of Housing and Urban-Rural Development, said in late 2010. Even if that standard rose to 65% by 2020, Chinese buildings would still use 50% more energy for heating on average than developed countries with similar climates.

Lighting, heating and ventilating buildings uses more than a quarter of the power China generates, Li said. An additional 15% of the country’s energy is used for manufacturing and transporting building materials, and for constructing homes and offices, according to the Worldwatch Institute. Energy efficient approaches to building materials and construction could greatly reduce this voracious appetite for energy.

To a country that is one of the world’s largest importers of coal and oil, energy efficiency matters. China’s current energy plan, with its emphasis on the supply side of the energy equation, is akin to pouring an increasing amount of water into an expanding bucket full of holes. State media reports as early as 2006 claimed China would not be able to meet the energy demands of its buildings in 2020.

Energy efficiency would provide a way for China to reduce its use of fossil fuels without expensive outlays in alternative energy sources. Saving a kilowatt of power costs just a quarter of the amount used to generate a new kilowatt, said Barbara Finamore, founder and director of Natural Resources Defense Council’s China program. The NRDC estimates increased energy efficiency could cut China’s growth in energy demand in half by 2030.

However, Etienne Charlier, the director of Pinchuang Environmental Services in Shanghai, argues the Chinese government’s attention to energy efficiency is already greater than that of the US and the EU. Charlier’s company implements an energy management information system that collects data about the use of oil, electricity, gas and water in buildings and helps managers make decisions about energy accounting.

Charlier said he quickly realized that buildings in China are not energy efficient at all. Local officials know they have a problem, they just don’t know how to fix it, he said. “Economic development zones in China want to be green, but local officials are under pressure to get the places built,” said Charlier. The added expenses of efficiency measures can dissuade property developers from applying to build the projects, he said.

China built 1.9 billion square meters of new floor area in 2011, the biggest new construction volume in the world. This go-go approach does not lend itself to energy efficiency considerations, even when building designs require it. Energy conservation in some buildings has actually dropped to as little as 6-7% of the specifications in original designs, according to Qiu Baoxing, China’s vice-minister of Housing and Urban-Rural Development.

Unregulated property developers are partly to blame. However, prospective buyers have also been loath to take on the extra cost of features like additional insulation, properly installed heating and air conditioning (HVAC) ducts and double-paned glass – which may add an extra RMB100-150 (US$16-24) per square meter (even though the return on the investment can be as much as 10 times the amount spent over a 20-year period, according to The Worldwatch Institute).

The Austral Refrigeration factory near eastern China’s Lake Taihu illustrates the savings to be had from investment in efficiency. The Australian-invested enterprise in Suzhou has invested in both energy-efficient interior design and manufacturing approaches. The company saw its first profit by the end of its first year in February 2011, which General Manager Johann Wieber attributed to energy savings measures. “My bosses in Australia would not have signed off on the investment in energy efficiency if the return was going to take more than a year,” Wieber said.

According to Wieber, the greatest challenge in implementing the energy efficiency measures was inculcating habits in local staff that would support conservation. To do this, the company created a set of incentives and disincentives to shape employee habits and let them know the company was serious about energy efficiency. “Just switching off the lights as necessary requires an education. We had to build bonuses and penalties around energy efficiency goals,” Wieber said.

There are huge returns to be had from expanding these types of measure nationwide. However, the energy efficiency consultant to the project, Franz Lang, general manager of VE-Engineering, is not optimistic about policies to make Chinese buildings more energy efficient. “In about five years,” Lang said, half-jokingly, “local governments will realize the buildings won’t be standing much longer [because of poor construction quality]. They’ll acknowledge that their buildings are completely inefficient, tear them all down, and then start all over again.”