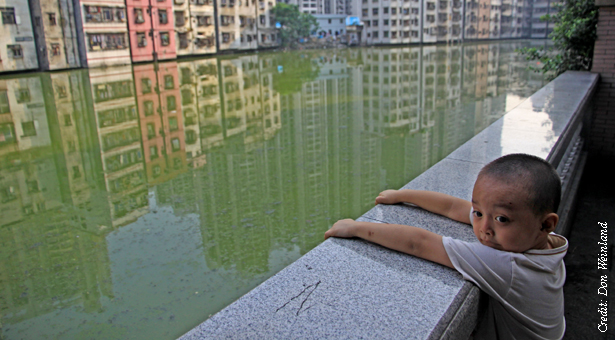 Editor’s note: In the three-part series Unstable Foundations, China Economic Review looks beyond present-day concerns over China’s property industry to consider overlooked factors that may haunt the real estate market in decades to come. Click to read part one and part two.

China has built glittering metropolises in the span of roughly three decades of reform and opening. But in an equal span of time, shiny urban centers risk losing their shining façades or even descending into slums thanks to poor construction quality and unclear property rights.

One study released in January points to exactly that scenario. Authored by an international team of scholars, the report shows that ambiguity in the country’s land laws is pushing investment out of the center of the city and toward the outskirts.

This toxic combination could lead to dying city centers and out-of-control urban sprawl. One of the authors, a Peking University professor, said the system could create massive slums out of the urban core.

One thing is clear from the report: Poor guarantees on the value of investments in city centers are sending developers in search of better ventures.

“It’s simple mathematics,” said David Dale-Johnson, a real estate professor at Alberta School of Business, who led the report. “The more uncertainty there is with the renewal of leases, the less likely that re-development will occur as it should in the core.”

All residential land in Chinese cities is leased out by the government for up to 70 years, rather than being sold. Early leases are already more than two decades into their term. What happens when these leases expire is ambiguous and will inadvertently point property firms toward building new projects on the edges of the cities, a far more certain bet than improving existing buildings.

As an unintended side effect, cities will sprawl.

Although national law stipulates that lease contracts be renewed upon expiration, the government hasn’t specified the conditions for renewal. The absent details add a degree of insecurity to the value of buildings and could discourage re-investment and re-development, according to Dale-Johnson’s study.

Given the current, incomplete state of the land law, new projects with fresh 70-year leases will attract more investment, the study showed. Developers will thus be far more confident building on the peripheries of the cities.

The outcome of an outward push will make cities undesirably large. Urban sprawl is eating up rural land that has supported farmers for generation, and eventually deepens inequality in Chinese society.

As cities grow, officials sell off lucrative farmland to developers for construction projects. The original residents are virtually forced into urban life, often without adequate compensation or assistance with employment.

Living on the edges of Chinese cities is already tough for the poor.

In his 2012 book “The End of the Chinese Dream,” Gerard Lemos investigated three newly urban communities in the rapidly expanding city of Chongqing. Many residents there lived without access to welfare and were generally uneasy about the future.

In the future, urban living in city centers could similarly be characterized by low-income housing, and even slums.

Although not included in the January study, the team of researchers drew the conclusion that property in the center of Chinese cities would likely become slums, according to Zhu Guozhong, a professor at Peking University, who co-authored the study with Dale-Johnson.

Few buildings in Chinese cities will last 70 year, or to the end of the land lease. The average lifespan for construction works today in China is between 25 to 35 years. Without proper maintenance, it’s possible that homeowners will ditch their properties in cores of cities and head for the outskirts of town.

“These structures would just be occupied by the poor,” Zhu said. “Likely, those would be the ghettos in China.”

Such an outcome would be magnified if China’s economy slowed down, Zhu said. The government would have fewer funds to assist in the re-development, leaving urban centers to further languish.

The findings are not all that outlandish. Author Tom Miller, in his 2012 book “China’s Urban Billion,” hinted at some of the outcomes that could afflict Chinese cities in the future, such as enormous slums.

Sun Xi, an analyst at environmental and governance research firm Sustainalytics, said the leases could in fact push new developments away from city centers, leaving them poorly maintained. But its far from certain.

“China is changing rapidly and relevant laws and regulations are also under hot debate,” he said.

Not all analysts and academics project such a dire future. Many are mixed on the precise effect the land lease system will have on China’s future. Some have disregarded the gloomy outlook, saying that Beijing has ample time to work out any kinks.

The Communist Party is showing some signs of loosening its grip on the land, said Richard Hu, a professor of business, government and law at the University of Canberra, who has focused on urban planning in China. The fact that the government has even allowed a property market to exist is a positive sign, he said. Before the early 1990s, land transactions were prohibited, and the government has slowly added supporting laws since then.

But the status of the law itself will have little effect on building maintenance in cities, Hu said. In developed economies, land owners – often the people who live in the apartments – will pool funds to hire maintenance companies. The same framework should work in China without the need for property developers to re-purchase and re-invest in buildings.

Hu’s opinion is guided by the fact that, while homeowners don’t own the land, they do own the buildings on the land and are likely to protect those assets. The ambiguity surrounding land leases is an afterthought for most Chinese home buyers, and something they widely expect to be resolved before leases are up.

“I agree that it presents legal uncertainty, and that’s a big issue for Westerners, and from the perspective of rule of law,” Hu said. “But for China, it’s kind of a transitioning stage. I don’t think this uncertainty will lead to bad maintenance of the property.”

Johnson Hu, a property analyst at CIMB in Hong Kong, said the Chinese government may even give land titles to homeowners long before leases come to term.

Residents can only hope the Chinese the transition toward a new system is as smooth. For its part, the Chinese government certainly has the motivation to iron out wrinkles in the law.

Already, more than 150 cities support populations of more than 1 million people. More than 70% of Chinese are expected to live in cities in 2035, about the time the country’s population is expected to peak at 1.5 billion. That will push the urban
population over 1 billion.

The government will have little interest in alienating the huge population of urban lease holders by putting their property rights into jeopardy. The prospect of decaying urban centers and cities that swallow the land into their dusty environs is sure to prompt Beijing to act.