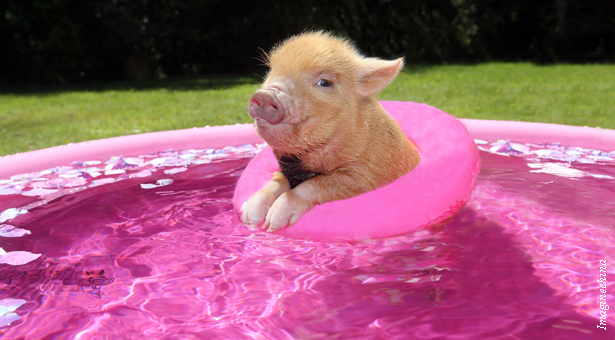 The image of thousands of dead, waterlogged swines has sullied an otherwise whitewashed image of China during the government’s annual congress. On TV and computer screens across the globe, the pigs are floating among white foam and plastic bottles in a muddy waterway. They’re falling flaccidly from conveyor belts into the backs of industrial trash bins. Masked workers are dragging them to shore with metal prongs attached to the ends of long bamboo poles. And there are nearly 7,000 of them in the river that doubles as a source of water for China’s largest city, Shanghai.

The pigs may have floated downstream from a farm in Jiaxing, a major pork producing city in the region. But deducing why the livestock were tossed into a river will be far more important than figuring out which farmers were responsible.

“They may have been trying to avoid a food safety scandal, but they didn’t have a good way to get rid of [the pigs],” says Sun Xi, an analyst at environmental and governance research firm Sustainalytics in Singapore, referring to farmers who may have dumped the carcasses in the river.

The dead pigs may have been a blessing in disguise because the meat – from which scientists detected a porcine virus – didn’t end up on dinner tables in Shanghai. In years passed the meat floating in the river this week could have reached restaurants and homes. Selling dead or diseased pigs into the market has become so commonplace in China that the government recently heightened enforcement on the sales of such potentially hazardous pork, Sun said.

It’s not just the enforcement of pork safety that is changing. The entire food safety apparatus is undergoing a tremendous transition after 10 years of food and drug related scandals have deeply eroded public trust and stirred an international wariness for the Chinese products.

The annual National People’s Congress, which introduced a new line up of top leaders Thursday, also elevated the country’s food and drug regulator to ministerial level. This takes a long-embattled State Food and Drug Administration and puts it on par with the Ministry of Health, a powerful yet bureaucratic department that has worked to keep the former agency under its political wing.

Observers have hailed the move as an unprecedented victory for the country’s food safety, but the empowered SFDA will have its work cut out for it in an environment that has become alarmingly noxious in the span of a decade.

China would earn its dismal food safety record during the eras of Hu Jintao and Wen Jiabao, the former president and premier, both of whom stepped down this week. The 10-year period was defined by unbridled growth with little thought for the toll on the Chinese landscape or the health of residents.

A string of food and drug related scandals starting in 2006 brought food safety to the forefront of national consciousness. Highly publicized food safety debacles, some resulting in death, haven’t ceased since then.

During 2006 and 2007, five major food and drug scandals brought China into the international spotlight that shaped the regulatory environment for the following five years. In 2007, just months after contaminated toothpaste from China ended up on North American shelves, the country sentenced Zheng Xiaoyu, then head of the SFDA, to death on corruption charges. Zheng’s administration had also allowed tainted pharmaceutical products to kill several people in the West.

Behind the scenes, the SFDA and the Ministry of Health were battling for power, said Huang Yanzhong, a senior fellow for global health at the Council on Foreign relations. Zheng Xiaoyu’s case took the momentum out of reforms that had consolidated power with the SFDA. The ministry snaffled away a host of powers over policy writing, investigation and enforcement, among others.

The Sanlu milk powder scandal in 2008, which killed four infants and put more than 100,000 in the hospital, would further diffuse regulation. As if in an attempt to guard against future retribution, the government spread responsibility for food and drug safety across five different regulators in reaction to the scandal. The move allowed officials to pass the buck when problems occurred, said Huang, who recently wrote a book on food safety in China.

“There is no doubt that food and drug safety is now among the top pains of China’s increasingly wealthy people,” Ting Lu, head China economist at Bank of America Merrill Lynch, said in a note last week.

But the changes enacted last week at the NPC were a strong sign that reform in food and drug regulation is succeeding. Ting Lu told China Economic Review this week that elevating the SFDA to the level of ministry would mitigate the problems associated with fragmented regulation, although some overlap would still exist.

The SFDA’s heightened stature “will certainly improve the integration of regulation by allowing regulators to oversee the full spectrum of activities after food leaves the farm,” said Yang Dali, a professor of political science at the University of Chicago. However, there is no single solution to solving China’s endemic food problems, he said. The success of the SFDA will depend on its access to resources and reaction time for implementing new measures. The judicial system will also need to play a greater role in regulation, Yang said.

The Ministry of Health will still be the primary policy-making body, while the SFDA will control most of the regulation and enforcement of rules, Sun at Sustainalytics said. To Sun, the changes represent a culmination of several years of reform at the hands of the same officials that are now taking over the top leadership, particularly newly appointed Premier Li Keqiang.

Li was tapped to head the Food Safety Commission, a regulatory body formed after the Sanlu scandal that will now become part of the SFDA, at the same time he was being groomed for his current role as China’s No. 2. The sensitive nature of such positions could make them a testing ground for up-and-coming political stars during the next 10 years, according to Sun. As a result, food safety is more likely to stay at the top of the new government’s agenda.

While progress is being made, the pigs in the river this week demonstrated – in a morbid way –  the continued fragmentation in the system.