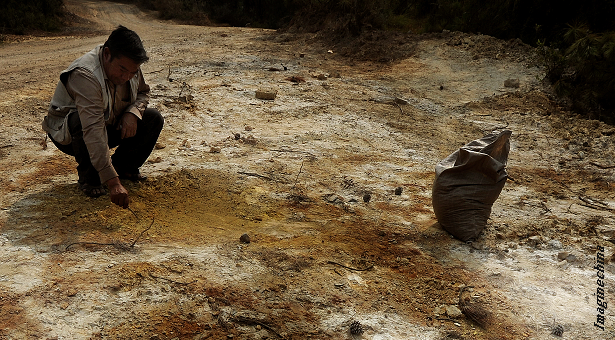 Why health hazards continue to spring from China's poisoned soil

This year the Chinese government released its first ever study on soil pollution, a topic it once asserted was a state secret. Though the findings were only partially released, the results were worrisome: 16.1% of China’s soil and 19.4% of its farmland are contaminated. The information came on the heels of last year’s discovery of unsafe cadmium levels in 44% of rice sampled in Guangdong province as well as earlier studies raising serious concerns regarding heavy metal levels in soil and dust, including levels more than 10 times the recommended limit at one open-air food market.

Soil pollution, both directly and through its poisoning of crops and water supplies, has contributed to a plethora of negative health effects, most notably high rates of cancer. The World Health Organization’s most recent World Cancer Report ranked China number one globally in both cancer cases diagnosed and cancer-related deaths annually, and with a new study indicating a cancer survival rate of only 30.9% nation-wide (21.8% for rural patients), the increase in pollution-related illness is pushing the government toward at least appearing to take stronger action. However, while waves of record-breaking smog draw global attention to China’s air pollution crisis, the abiding danger of contaminated soil may ultimately prove just as chronic and costly, if not more so.

Some estimates claim that as many as 450 villages with a higher than average cancer rate exist across China, most of them close to industrial zones. In 2013 China Water Risk, a non-profit organization aimed at monitoring and improving water conditions in China, released a study on cancer villages that examined 255 known cases since 2001. The group found that the highest reported concentration of cancer village incidents were in Hebei, Henan, Guangdong, Anhui and Jiangsu. Of those, Guangdong, Jiangsu and Henan rank in the top five provinces in terms of economic output and accounted for roughly 25% of China’s total GDP in 2012.

The county level city of Yixing on the banks of Lake Tai in Jiangsu province has seen the construction of nearly 3,000 factories since the 1990s – a fact that has made it both one of China’s top county-level cities in terms of GDP and host to a plague of severe cancer problems. Soil contamination in Yixing led many farmers there to not eat their own crops on suspicion that food grown in the area was not safe. A 2013 study published by the Jiangsu Geological Survey confirmed these suspicions, finding cadmium levels in some areas around Lake Tai had long been above China’s food safety standards. Rice near the neighboring township of Dingshu contained more than 0.5 mg of cadmium per kilogram, far in excess of the government limit of 0.2 mg. International safety standards are set at 0.4 mg per kg, but long-term exposure to lower levels is considered highly dangerous as well. Whatever the standard, nearby river silt contained as much as 1500 mg of cadmium per kilogram.

Cadmium most directly impacts human health through consumption of crops grown in contaminated soil and consumption of meat from animals exposed to high cadmium levels, particularly marine animals, according to a 2013 European Commission Soil Contamination report, and is associated with a number of negative health effects, though its exact consequences are still disputed. The generally agreed-upon effects on people exposed to high levels of cadmium are kidney and lung damage. The U.S. Department of Health and Human Services and the International Agency for Research on Cancer have labeled cadmium a carcinogen, while other organizations only label its cancer-causing attributes as “suspected” or “probable.” In Shuangqiao village in Hunan province a recent report found cadmium levels to be 300 times above those authorized, with one in six of the 3,000 villagers tested showing high levels. Since 2009, at least 26 villagers in Shuangqiao have died of cadmium poisoning, of which 20 had cancer. Many children there have also been born with deformities.

A growing contributor to such soil pollution is e-waste from the disposal of electronic devices such as computers and cell phones. A 2012 United Nations report estimates that e-waste in China and South Asia will increase by 200-400% by 2020. Hong Kong professor and soil expert Dr. Anna O W Leung found several heavy metals including cadmium as well as cancer-causing dioxins and other dangerous chemicals in a study of soil pollution from the e-waste hotspot of Guiyu, in Guangdong province. High levels were found in dust samples taken from roads, the aforementioned food market, a schoolyard and an open-air canteen next to the school where children eat lunch. “Since the soil interface interacts directly with air and water, pollutants in the soil could volatilize into the air or migrate into the air via dust transport, and it also could pollute surface water,” Leung said. She added that children are especially susceptible to exposure from “hand to mouth activities.”

The central government’s response so far has mainly come in the form of calls for change. The first long-term, comprehensive strategy for dealing with these issues came from the Action Plan on Environment and Health (2007-2015). But four years later the Ministry of Environmental Protection released a new report criticizing the lack of institutional capacity, research data and public awareness – all specific goals of the ’07 plan. There have been some concrete efforts, such as RMB500 million invested in cleaning up the 600 most polluted villages in 2008, and the inclusion of US$4.8 billion (RMB30 billion) committed to soil pollution in the current 12th Five-Year Plan. However, these numbers pale in comparison to the US$277 billion the plan allocates for addressing air pollution.

The government response has increasingly included shutting down heavily polluting factories, such as the 300 already closed around Yixing. Still, a soil survey there conducted last year found that cadmium levels had continued increasing in 37.5% of the areas sampled. Furthermore, as Greenpeace campaigner Ada Kong noted, “when their factories got shut down in Hunan province and some other more developed provinces, these highly polluting factories are actually moving to the western side of the country.” If factories are indeed moving to western provinces to escape stricter local regulations, the scope of the problem may actually be expanding as a result. A report (Chinese) last week by Beijing-based newsmagazine Caixin on illegal chemical dumping in China suggested such fears are justified when it noted that industry insiders privately referred to the country’s arid western expanses as a “pollution reservoir”.

One of the major barriers to an effective official response comes from China’s conflicting goals of economic growth and environmental preservation. A Peking University analysis of 74 areas with high cancer death rates asserted that competition among local governments for central government resources leads to GDP-centric policies that ignore environmental concerns, since economic growth is the main indicator used to evaluate the success of these areas’ officials.

Some progress was made in remedying this situation with the Decision on Major Issues Concerning Comprehensively Deepening Reforms issued by the party’s central committee in November 2013, which called for less exclusive focus on GDP and stronger ac
knowledgement of environmental issues when evaluating the performance of local governments. However, the current economic slowdown may turn provincial attention back to kick-starting local economies.

Meanwhile, much of China’s response to environmental concerns remains directed at urban areas and air pollution, resulting in policies that are not easily adapted to rural areas and soil contamination. Without more attention paid to the less visible carcinogens underfoot in China’s countryside, cancer rates may continue creeping upward even after the haze finally lifts from its cities’ skylines. ♦