Home Business How will a slowing China cope with rapidly aging buildings? 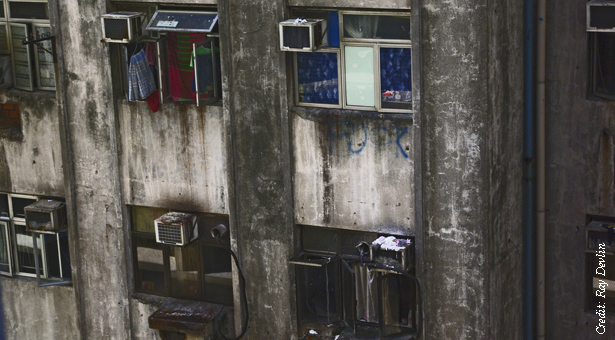 How will a slowing China cope with rapidly aging buildings?

Architect Francesca Galeazzi has been watching the construction site out her office window for some time now. It wouldn’t take someone with her level of expertise to figure out that something odd was going on at the site just off of Shanghai’s heavily commercialized Huaihai Road.

Such lack of planning is common in the Chinese construction sector, and it’s one of many factors driving pervasive poor building quality in the country. In one extreme case, a botched construction job led a mostly completed apartment building to tip over.

But such instances are rare. Small quality issues, including outdated heating and cooling or cracking façades, are far more endemic. These problems add up and eventually make the buildings unlivable, or at least very uncomfortable.

Chinese researchers have suggested that many buildings could reach the end of their lifespan in as little as 20 years. The average lifespan of a Chinese building is 35 years, according to property consultancy Cushman & Wakefield. That’s abysmal compared to the average 74 year life span of US buildings and 132 year lifespan of buildings in the UK.

While Galeazzi said she’s optimistic and already seeing signs of gradual improvement in building quality, other property market watchers say the damage of already existing poor construction cannot be undone. Regardless, the country will have to reckon with a glut of worn out buildings in as little as two decades time. What China can determine are the methods it uses to confront this problem.

Not dead but crusty

When buildings reach the end of their lifespan, however long that is, they don’t just crumble to dust. Lifespan is more a judge of whether a building is outdated by modern standards. For example, building systems – the “nerves and blood vessels” of a structure – will wear out, said Zhang Lei, who oversees property consultancy Jones Lang LaSalle’s construction oversight services for China. That could include systems for power, heating and cooling and fire prevention.

The façades of buildings and interior fixtures can also wear out. Quite simply, in two decades, most Chinese buildings will look dilapidated, said Robert Blohm, an economist and managing director of consultancy Keen Resources Asia.

All buildings will face  these issues eventually. But the difference for China is that many buildings are being constructed in such a way that they reach this point far sooner than in the US or Europe.

Builders can cut corners in any number of ways. Oftentimes they will merely deviate from the materials that were called for in a building plan and instead opt for cheaper materials that don’t perform as well, Galeazzi at Arup said. For example, they might use cheaper insulation or fixtures.

“At the end of the day, [if] construction companies and developers can get away with current practices, they tend to do that,” she said. “I would say a combination of high demand, low compliance tests [and] legislation that is lagging behind.”

The high demand for buildings means that developers don’t have to differentiate themselves by constructing higher quality buildings in order to compete. Instead, they may merely compete on the speed and cost of construction.

Legislation mandating certain minimum building standards do exist and are gradually improving, she said. But China only adopted its first building code in 1986 and in the ensuing decades has yet to catch up to standards in the West.

Compliance checks to ensure buildings meet existing standards have already been instituted, but only for select buildings in the country’s largest cities, Galeazzi said. Most construction is actually taking place in lower tier cities.

The combination all adds up to widespread poor building quality. And although it is meeting current market demands, the desires and requirements of today fail to address the looming problems of tomorrow.

Property watchers disagree on what buildings will look like 20 years down the line.

Even if strict standards were enforced starting now that allow for buildings to last 70 years, China cannot undo the damage of the many already poorly built structures, Blohm said. While he doesn’t foresee an outright disaster from aging buildings, China’s urban landscapes will become rather grim.

China’s engines of growth, he argues, will likely have run out of steam in two decades and thus the country will not be in a position to replace aging buildings.

Blohm sees two engines adding up to China’s current supergrowth: Massive rural to urban migration and an already gigantic and growing population. But Chinese migration to cities will likely run out of steam by next decade. The country is also already on the verge of slipping into negative population growth, so that engine will also run out. Such trends have similarly brought supergrowth to an end in the Asian tiger economies like South Korea, Blohm said.

“So what happens by that time?” he said. “Well, that’s when a lot of the construction has reached its 30 year limit and it all has to be rebuilt. And you’ve got a nothing economy there to support this entire reproduction of what the economic boom produced. I don’t see that happening.”

On the positive side, rundown buildings will help bring down property costs and make them more affordable for average Chinese either looking for living space or space for their business, Blohm said. Chinese developers have disproportionately built high-end properties, which are out of reach for many families and small businesses at present.

Buildings will be used, but perhaps not for their original purposes. Luxury shopping malls and apartment buildings might be partitioned off to allow more, smaller tenants. This can already be seen in some overbuilt housing projects, Blohm said. Starting a business may be cheaper, but it will be “a shabby, dusty, rundown economy – not the picture of China you see now.”

But Zhang of Jones Lang LaSalle and Galeazzi see most buildings turning into fixer-uppers rather than mere dilapidated shells.

Building systems, such as heating and cooling, normally wear out and need to be replaced at some point, Zhang said. On the exterior, aging buildings could be merely stripped of their façades and re-clad, Galeazzi said.

That is already happening with aging buildings, such as one near Zhang’s office in Beijing’s central business district that was built more than 20 years ago.

“A developer bought that building and they stripped it of everything other than the concrete – the façade, all types of building systems – and put in new systems, new façade and new interior, and they’re selling it at a very high price.”

Renovation may work for individual buildings now in high demand areas. But refurbishing vast swathes of buildings may prove more challenging, albeit far more achievable than replacing every old building at the end of its lifespan. Whether China has the economic wherewithal for such re
pairs decades from now will likely depend far more on the sustainability of its economy than its buildings.