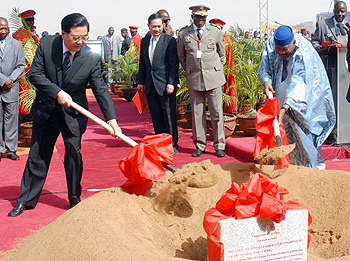 Kobus van der Wath is founder and group managing director at The Beijing Axis, an international consulting firm based in Beijing. He was formerly a senior strategy consultant at the Boston Consulting Group (BCG) and head of investment strategy and Asia Pacific market research at Standard Chartered (STAN.LSE, 2888.HK). Van der Wath spoke with China Economic Review about the current state of Chinese investment in South Africa and where it may be heading.

Q: How would you characterize China’s investment strategy in Africa?

A: China’s overseas investment is clearly dominated by resource extraction – primarily oil, followed by metals and minerals. Africa is prominent within that strategy, but it has not yet really attracted the levels of investment China pursues in, say,  Australia, because Africa is a complicated, fragmented continent. China has invested in oil, copper, platinum and ferrochrome, but much less than it would have liked – and much less than we can expect it to do.

Q: What other sectors of the South African economy have seen significant Chinese investment?

A: Natural resources are a key strategic area for China, but it has invested much less than in the financial sector. This has not been for lack of trying. Beyond the mining sector, there has been investment in manufacturing, including automotive assembly lines and textiles. The Chinese have really invested right across the spectrum, including logistics and services. But these pale in significance next to the really big investments, like the Industrial and Commercial Bank of China’s (ICBC; 601398.SH, 1398.HK) deal with Standard Bank (SBK.JNB), and the mining industry.

Q: How would you characterize the current crop of Chinese mining investments within South Africa?

A: South Africa is very rich in manganese, chrome, platinum, gold and diamonds, and China definitely wants to do more than it has so far. Jin­chuan’s investment in Wesizwe Platinum (WEZ.JNB) was less than US$1 billion, Sinosteel’s total investment has been less than US$500 million, and the others add up to around US$200 million. China has shown an interest in going for some of the bigger players, but that has not been welcomed in South Africa. With liquidity and credit availability now improving, there is less need from the big players operating in South Africa for strategic capital. As a result, the soft targets are junior miners, and that has been where the investment has gone. China is also looking further upstream, at exploration and early-stage projects, which means it can get access to larger projects that it couldn’t otherwise get involved in.

Q: What is the South African government’s perspective on Chinese investment?

A: I would say cautious, but welcoming. On the South African side, there is a debate about how to get China to increase investment in manufacturing and mineral purification. China wants to make these investments, but there is still the question of developing the infrastructure needed to support them. The question is how a win-win partnership can evolve, in which the government and people of South Africa benefit, but do not simply export raw materials.

Q: Do the labor unions pose a drag on Chinese investment in South Africa?

A: Lower-income earners are a very important constituency here, and sidelining the interests of the labor movement in South Africa is nigh-on impossible. We definitely do see some labor market rigidities: Some investors think there are too many labor constraints, and this is often a source for debate. But I think the wider context is more important. Is South Africa an attractive investment location overall? I think so. Going forward, we’re looking at more local mineral processing and, as mentioned, guarding against too much in the way of basic resource exports. There is a need to try to secure the manufacturing capacity already in place, but also to expand – and that’s also where unions enter the debate. On this issue their interests dovetail very nicely with those of the government. Basically, we need to work within the limitations that we have. South Africa’s entry into the BRIC group of countries [Brazil, Russia, China and India] will help, but it will take time for the benefits to feed through.

Q: What do you make of reports that suggest South Africa’s bureaucracy is stifling economic growth?

A: There is always room to improve the bureaucracy, but to be honest I don’t think this is such an important issue for investors into the country. More immediate issues are bottlenecks in supply and uneven infrastructure, along with the basic services and conditions in South Africa. Of course it is far from perfect, but I wouldn’t single out the South African bureaucracy as an overriding issue for those investing in the country, either for global portfolio investment or foreign direct investment.

Q: What is the future of Chinese investment in South Africa?

A: I think there will be infrastructure investments by China, potentially financing equity, debt or a combination of the two. The government will hopefully persuade the Chinese to invest more sizably and actively in the broad-based value-added manufacturing industry – whether that be processing industries in the mining sector or more general manufacturing. Also I think that services will continue to attract more attention, especially in areas like telecoms, logistics and IT.

Q: Do you see South Africa as a gateway into Africa for Chinese firms?

A: For sure, it is very much a gateway in the services industry in particular. There are serviced offices, centralized procurement hubs, legal, accounting and tax services here, and they are being plugged into operations for various companies across the continent. Personally, I think this role as the gateway to Africa is something that South Africa realized fairly late. The continent has embraced South Africa since 1994, and Chinese companies have expanded into the region. The fact is that South Africa has become the pivotal launch pad into most of sub-Saharan Africa. The Maghreb and northern Africa are somewhat different – as are the Francophone countries – but I would say generally speaking, this is very much the entry point for Africa.