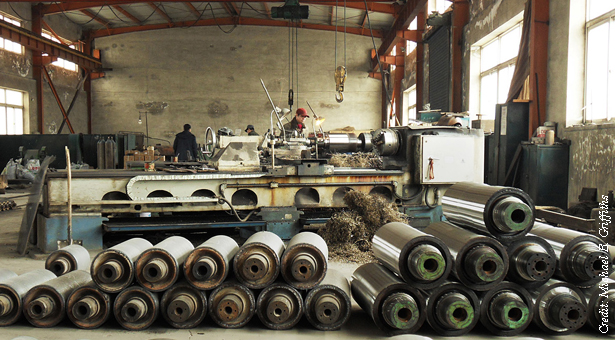 Anatomy of a Chinese city

Michael B. Griffiths is director of ethnography at Ogilvy & Mather, Greater China, and author of “Consumers and Individuals In China: Standing Out, Fitting In,” published in December 2012.

A “rust-belt” city in the heartland of what used to be known as Manchuria, Anshan was a place of little broader significance until the Japanese established a steel mill there in 1918. The full-scale Japanese invasion of 1931 saw Anshan’s steel and mining industries become consolidated under a single Japanese monopoly known as Showa Steelworks, which for a while became one of the largest iron and steel production centers in the world.

This steelworks was all but destroyed by the Allied Forces’ bombing during World War II but rejuvenated following the Communists’ 1948 “liberation” of northeastern China as the Anshan Iron and Steel Company. Its name popularly abbreviated to Angang, Anshan’s new steelworks were managed directly by the State-owned Assets Supervision and Administration Commission of China’s State Council, a situation which afforded local government officials considerable power and influence relative to those in cities of similar size. Between the 1949 founding of the People’s Republic of China and the 1978 enactment of the one-child policy, Anshan’s population swelled to roughly 3 million around its state-owned enterprises.

Since the vast majority of residents relied entirely on Angang for food, housing and other resources, the mass industrial layoffs precipitated by the introduction of automated processes and partial privatization throughout the 1990s had cataclysmic effects on the local economy. Workers were offered paltry pension payoffs or, for those too young to claim their pensions and ineligible for unemployment benefit, a meager stipend while they waited for retirement age, thus earning Anshan a reputation for social depression to complement the one it already had for environmental grime.

The structural changes at Angang prompted waves of social unrest throughout the region – not least in nearby Liaoyang, where the central government struggled to suppress worker protests in response to management corruption in 2002. They also prompted huge numbers of both formal and informal entrepreneurial startups, making a few individuals wildly successful but most much less so. The most prosperous were run by well-connected individuals who rented real estate from Angang and sold services back to it from the premises.

Once an icon of socialist productivity, Anshan rapidly became a society characterized by vast differentials in personal wealth. While former workers eked out a living by any means necessary, the newly-moneyed corporate and entrepreneurial class began to conspicuously support the new market for luxury cars, foreign holidays and a labyrinth of hedonistic new entertainment complexes.

Faced with a rising contingent of angry “post-proletariat” ex-workers, the local government leveled many of Anshan’s shabby Soviet-inspired housing compounds in the city center, making way for huge investments in shopping malls and upscale apartments. Particularly with the advent of the 2008 Olympics and the 60th anniversary of the Chinese Communist Party’s rule 2009, entire swathes of dilapidated houses were demolished to clear space for glittering consumer-scapes which now almost entirely eclipse the huge, monolithic frame of the steelworks still lurking in the belly of the city center. The strategy is to mold Anshan into a shopping and tourism center for the whole region, thus making the systematic “redistribution” of state assets appear democratically accessible.

Today, Anshan’s pollution is much more controlled than it once was. Although the city is still very much characterized by the erosion of collective social protection, the widening of social inequalities and the polarization of wealth, it has successfully cultivated a booming private sector and consumer culture.

This transition is evident in many of the key economic indicators. Anshan’s official GDP was RMB192 billion (US$28.1 billion) in 2009 rising from RMB3.8 billion in 1980, according to the Anshan City Statistics and Planning Bureau. Total consumer expenditure was RMB46 billion, rising from RMB24 billion in 2006.

The change can also be seen in the landscape of the city. Anshan has attracted retailers including Tesco, Carrefour and several large domestic chains since the mid-2000s. A new elevated high-speed railway running from Dalian on the coast to Heilongjiang province in the far North will soon pass through Anshan’s “West of the Tracks” district, promising further economic stimulus in an area which still desperately needs it.

Anshan’s “East of the Tracks” district has always been regarded as more up-market than its western counterpart because of its beautiful “219” park and lakeside housing. The northern district of Lishan is similar in social and economic constitution to “West of the Tracks.” The scenic “Thousand Mountains” district features sprawling new developments in commuter-belt housing and leisure outlets which fuel urban consumers emerging desires to experience the countryside as leisure.

In 2010, Anshan’s total urban and rural prefectural population was estimated to be approximately 4 million, making Anshan the third-largest city in Liaoning province and the fifth-largest in China’s northeast by population. The dominant Han ethnic majority is supplemented by around 530,000 indigenous Man, Hui and Korean-Chinese minorities. There are additionally an estimated 500,000 unregistered migrants from neighboring or distant counties, according to Anshan City Statistics and Planning Bureau.

Material inequalities have been complemented by the (re)emergence of strongly contested cultural distinctions: No longer is it sufficient to merely have money and material goods in Anshan; the distinguished person today must also draw on other less tangible forms of value, showing good taste and market savvy in the products they consume. China is of course a diverse market, but Anshan, recently listed by The Economist’s Intelligence Unit as one of China’s twenty fastest growing cities, remains very typical of the sorts of places that social scientists and international marketers most urgently need to understand.

Excerpted and edited with permission from “Consumers and Individuals In China: Standing Out, Fitting In” (Routledge, 2012) by Michael Griffiths.