Home Agriculture Are the US and China heading for a full-blown trade war? 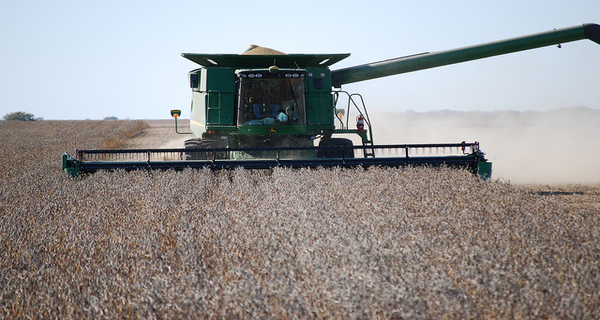 US agriculture has been a key target of Chinese tariffs

Are the US and China heading for a full-blown trade war?

The United States and China have moved their game of chicken on trade up a gear over the past few days. While there is still a decent chance of the two sides avoiding a collision by thrashing out a deal of some kind, they now appear to be accelerating toward each other at quite an alarming pace.

On Wednesday, China announced its intentions to impose tariffs on $50 billion worth of imports from the US as a tit-for-tat response to a similar plan announced by the American side in late-March. This in turn drew an almost immediate reply from President Donald Trump, who ordered US Trade Representative Robert Lighthizer to consider expanding the existing protectionist measures by a further $100 billion a day later, citing “unfair retaliation” by the Chinese.

In both cases, the extra tariffs would only come into effect if the US decides to go ahead with its $50 billion round of tariffs first announced on March 22. These are not due to be implemented for several weeks, meaning that the US and China still have time to negotiate a deal that would avert a trade war.

But there is no doubt that the mood has darkened, with Chinese state media adopting a markedly more bellicose tone in its reporting. On Saturday, Xinhua claimed that “if the US says that it will pay any price, it must be firmly attacked,” whilst the hawkish Global Times said it was time for China to hit back with such conviction that America will “remember the pain.”

The Communist Party newspaper, People’s Daily, also joined in, claiming that “the White House has completely lost its sense of reality!”

Are the two superpowers now destined for a full-blown trade war? And how would this play out? Opinion among analysts remains sharply divided over both questions.

The US still has a number of cards it can play if it wants to escalate the conflict with China over trade. So far, it has confirmed tariffs on just $6 billion worth of Chinese imports—steel, aluminum, washing machines and solar panels.

The extra round of tariffs first proposed in March will affect a further 1,333 classifications of goods, the White House confirmed last week. The products selected are skewed mainly toward high-tech industries, which supports the US’s position that the tariffs are a response to China’s unfair practices over intellectual property, but also avoids having to place duties on products that will lead to raised prices in Walmart, such as clothing, footwear and consumer electronics.

Which products would be included in the most recent, $100-billion round of tariffs remains to be seen. Many of China’s largest exports to the US have yet to be hit—telephones, laptops, and modems & routers together made up around $100 billion of trade revenue for China in 2017, for example. Placing duties on these goods could inflict significant pain on Chinese manufacturers, but also on US consumers, and also the American, South Korean and Japanese suppliers who provide components to China-based contract manufacturers like Foxconn.

With a bilateral trade deficit of $375 billion, the US has significant scope to ramp up the conflict even further if it chooses. If China were to respond to the US’s $100 billion worth of tariffs in kind, on the other hand, it would mean placing duties on almost all American imports, which totalled $130 billion in 2017.

However, the US is likely to face domestic push-back if it chooses to escalate the conflict. US agricultural groups including the American Soybean Association, National Corn Growers Association and US Grains Council have already condemned the fact that the government is willing to risk China placing tariffs on soybeans, as China buys the majority of the US crop each year. Other industries are likely to lobby intensely to be exempted from tariffs, too.

The desired outcome for many is a return of the primacy of negotiations in resolving any trade disputes. Officials on both sides have offered some reassurance that this is likely. On Friday, White House economic adviser Larry Kudlow told reporters that talks are ongoing, and disputes could be sorted out within a matter of months. He added, nonetheless, that Trump’s rhetoric was “no bluff”.

Some analysts see the darkening of the mood in recent days as just part of the negotiation process. Mizuho Securities believe that both “China and the US will eventually scale back its list of reciprocal tariffs and we do not look for an all-out trade war between China and the US.”

Much could rest on what China offers the US in terms of increased access for American businesses to sectors of the Chinese market currently subjected to protections. Several senior White House officials have hinted that this issue is a deal-breaker in the negotiations.

China is likely to offer some opening in industries that it considers of little strategic importance, such as automobiles and finance, but whether it offers the more fundamental reforms that many in the US desire is another question. What could change the calculus for China’s government would be if other major economies, such as the European Union and Japan, lined up with the US in demanding changes from China.

Worryingly for China, there are tentative signs that this may be beginning to happen, as both Japan and the EU have recently filed complaints of unfair trade practices against China at the World Trade Organization.

President Xi Jinping is due to give a speech later today at the Bo’ao Forum focusing on reform and market liberalisation. This should provide a clear insight into how China plans to respond to the US’s pressure.