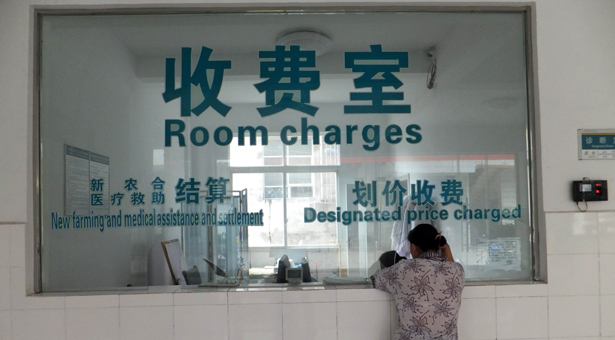 Many Chinese watched the UK’s lengthy tribute to universal health coverage in the Olympic opening ceremony with interest. Like some Americans, a few Chinese interpreted the dancing nurses and huge illuminated letters of “NHS” (for National Health Service) as a message meant only for them. “Capitalist Britain showed off its universal healthcare at the opening ceremony in front of socialist China! I don’t know what to say,” wrote one Sina Weibo user.

Chinese have some reason to be sensitive about their “socialist” healthcare system. Beijing drastically reduced its financial support for hospitals through the 1980s, encouraging the now-notorious practice of hospitals financing themselves by selling medicines (yiyao yangyi). Many Chinese now complain that hospitals and doctors rely on expensive prescriptions and kickbacks from pharmaceutical companies to make ends meet.

Beijing is currently rolling out pilot programs aimed at eliminating these mark-ups on medicines, in part by increasing charges for medical services. Called yiyao fenkai or “hospital and medicine separation,” the reforms were launched in all public hospitals in Shenzhen and the Friendship Hospital in Beijing on July 1, while four more hospitals in Shanghai will begin the trial this year. Yet reforming this huge and complex system will be difficult. China Economic Review spoke with medical industry experts, recent patients and hospital employees, most of whom expressed doubts about the effectiveness of the yiyao fenkai reform.

Medicine sales often account for 40-50% of hospital revenue. The goal of this current reform is to make these costs more reasonable, but it is challenging. This one reform is not enough to resolve the fundamental problem of expensive or inadequate healthcare in China. We also need to raise the price of medical services, ease financial pressure on public hospitals and properly compensate doctors – that way the entire cost structure of our medical system will be more reasonable. The cost of medical services in China is ridiculously low: Patients pay only a few renminbi to register and less than RMB100 (US$16) to stay overnight in a Level-three Class-A hospital, less than a typical hotel. The reforms are unlikely to decrease total outpatient costs, because the reduction in the cost of medicine will be offset by an increase in the cost of medical services. But they should allow hospitals to focus more on providing medical services, such as treatments, operations and consultations, while doctors can spend more time communicating with patients rather than prescribing medicines.

A doctor in Henan province who has worked at a hospital for 37 years:

Henan’s Ministry of Finance has started checking our pharmacy’s medicine procurements, and I’ve heard the reform will be implemented here on September 1. We’ve hired one person, who seems to have some relation with the central government, to manage medicine procurement. The profits from pharmaceutical sales should all go to the hospital, and doctors will not be able to receive kickbacks anymore, but who knows whether this person will receive some. The kickbacks from prescriptions are really too high; some doctors even give a cut to the employees in the registration office who guide patients to their department, which can lead to misdiagnosis. So doctors are worried now that their salaries will shrink. Currently our monthly salary is RMB2,000-3,000 (US$315-472), 60% of which is a base salary and 40% of which is a bonus based on the department’s performance. If the department doesn’t do well, doctors may not get even their basic salary. After the reforms, some doctors will probably move to private hospitals. Some in southern China, in areas such as Guangdong and Zhuhai, are offering annual salaries of RMB300,000 (US$47,151). In general, doctors will be the victims of these reforms. The value of our work is not recognized, and the situation is even worse for doctors at lower-level public hospitals. We have lots of complaints, and we don’t know where the next reforms will take us.

Ms Ma, a lab technician at a Shanghai hospital:

There is one doctor in another department who is very caring for his patients, but in order to pay his mortgage he started prescribing more expensive medicines. That’s the cruel reality. Our hospital started implementing the yiyao fenkai reform a while ago, and one department is now responsible for procuring medicine. But I believe certain types of medicine, such as expensive cancer medicine, are still brought in through medical vendors who give kickbacks to doctors. In our hospital, each department is responsible for generating its own profits. Medical vendors usually contact the head of each department, and some department heads overprescribe expensive medicines to boost revenue. There is no unified and system for overseeing department operations. Medicine sales make up the majority of each department’s income, while registration and treatment fees are low. I think doctors will be the victims of these reforms, unless their incomes are supplemented in some other way. Doctors get frustrated at being undervalued for their services, and that can motivate them to take bribes through sales of expensive medicines and medical equipment.

Zhu Hengpeng, a researcher at Chinese Academy of Social Sciences:

This reform is just the first step. It is the right one, though it may lead to other problems and thus other reforms. This reform will change the hospital revenue structure and challenge hospital management. Cancelling a 15% markup on medicines will have no impact on the hospital’s sales of medicines; in fact, medicine prices could be lowered even further to leave more space to raise the price of medical services. It’s still too early to talk about reforming doctor salaries, but China should encourage doctors to market their services more independently, both to give them more confidence and to encourage the development of private hospitals. The government typically provides about 5% of the revenue of public hospitals in the form of subsidies, and that won’t change. Broadly speaking, urban health insurance is a form of public finance, which means that the income of both hospitals and doctors are already subsidized by the government. They need to earn the money, rather than being directly given it.

In the past it seemed like I would go to the hospital just once to resolve a health problem, but now I have to go two or more times. It takes more time to register now. For example, someone in my family recently went to a Level-three Class-A hospital, and he registered in the morning but had to wait in line until the afternoon to see the doctor. Whenever I caught a cold I used to go to the hospital to get blood test, but now if the registration fee is RMB40-50 (US$6-8), plus the cost of diagnostic test and the medicine and the time spent waiting in line, I may just go to the pharmacy to buy something. There has been a lack of trust between patients and doctors for a long time, so I am not sure if patients will be willing to pay RMB100 (US$16) for their service. The cost of medical care has soared for patients without insurance, though those with insurance are okay. The reforms should eventually improve the level of medical service, though it will take time.

Mr Li, a 25-year-old employee of Ruder Finn in Beijing and a recent patient:

Registering in a Beijing hospital is really a painful thing, because you can’t always get a number. If you call 114 or register online, you can only reserve a spot for two to six months later. The most-respected hospitals only offer numbers for three months later, or not at all. If you want to see a doc
tor in Beijing, it’s best to just go line up outside of the hospital at 4 am. The biggest problem is not the registration fee, but that it’s so time-consuming or difficult to register in the first place. The result is that some patients never get to see a doctor even though they’d like to. This is a management problem, not a money problem. I hope the current reforms can be implemented nationwide, but I don’t have high expectations for it. If the service of public hospitals can more closely approximate that of private hospitals, an increase in service charge is not a big deal.