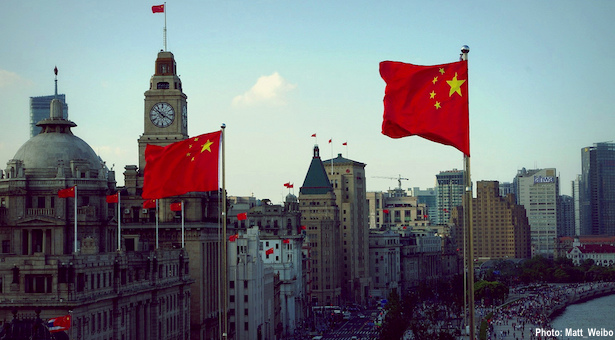 To look at the latest available data on business ownership in China, one could be forgiven for concluding that the days of state economic dominance were numbered: According to the most recent statistical yearbook released in by the National Bureau of Statistics, state-owned and state-controlled enterprises held less than a third of industrial assets in China in 2014.

But it’s not the size that counts.

“Simply throwing numbers and size around in China tells you virtually nothing about reality on the ground,” said Fraser Howie, co-author of Red Capitalism.

It is true that in some key sectors the state has ceded dominance, as reflected by both the size of assets held and the portion of the workplace it employs. In industry especially its presence has shrunk in the years since regulators opened the sector to a flood of private companies that quickly poured into manufacturing once given the go-ahead.

But while private investment flows quickly where allowed in China, it remains tightly constricted en route to increasingly important drivers of growth. As services grow in importance to both headline economic growth and employment, the state is retreating only gradually in many of the most vital sectors thereof, which are often viewed by the party-state as central to stability, security or sovereignty. And where it does step back, it reserves the right to return when it sees fit.

“The reality of modern day China is that the Communist Party is a totalitarian state that reserves right to be the final arbiter in any sphere of activity in China,” Howie said. While that doesn’t make official figures on state and private ownership in the myriad corners of the economy meaningless, it should inform how they are interpreted: As estimates, and always with limits.

The best data on state ownership and effective control of Chinese companies is provided by the statistics bureau’s economic census, conducted every five years. But only a few figures from the most recent 2013 iteration have been made public thus far, providing relatively little insight into how the role of state ownership in China’s economy may have changed since the previous census in 2008.

The bureau’s statistical yearbooks provide far less granular data on ownership and other key aspects of the state’s economic activities, but there are enough relevant indicators therein to give observers a rough idea of how things have developed from year to year—provided one knows where to look.

Sorting out ownership within industry is relatively easy since assets are broken down by sub-sectors within mining, utilities provision and manufacturing. Paul Hubbard at Australian National University, whose research focuses on China’s state firms, said that of all the sector data provided by the national statistics bureau, “industrial sector data is best, and includes state-owned and state holding companies – that means companies that might be partially state owned, or at least registered as corporations or joint ventures.”

This breadth of ownership, while not always indicating commercial dominance, does reflect the party-state’s unique presence in virtually every sector of the country’s economy, even those where its existence is largely vestigial. State ownership of utilities provision, for example, doesn’t make China an outlier among its international peers, but government presence also endures in many sub-sectors of manufacturing, such as in furniture production, where state-controlled assets account for only 2.1% of the total.

“In sectors like utilities, maintaining SOE dominance can be a good public policy choice,” Hubbard said. “But there’s still a lot of state capital in manufacturing, where the private sector has already triumphed. There’s no good economic reason for the state to stay involved here.”

Outside of industry, who owns what becomes more difficult to discern—a growing issue for observers of China’s economy, which in 2013 saw services account for more of annual economic growth than industry for the first time. Ownership data is lacking, but there are ways to get at the current state of affairs, such as through a closer inspection of what is (and isn’t) being reported.

The National Bureau of Statistics breaks the economy down into 19 sectors, 14 of which make up the services economy. The size of each sector’s state presence can be estimated by tallying the share of total employees accounted for by strictly private, as opposed to non-private, companies. While the category non-private in this case actually includes some firms that are privately controlled, the statistics bureau’s decision to report private employees for only seven sectors is nonetheless revealing.

Remarkably, these seven categories alone accounted for nearly 48% of total employment in 2014. Of the 168.6 million employees working at fully private firms that year, over 16% worked in manufacturing, while close to 5% were in construction. Almost 43% worked in wholesale and retail, by far the largest source of service-sector employment—indeed, of employment in China, period.

Also telling is the absence of private employment figures for three of four sectors often classified as “modern” services: information technology and transmission, scientific research and technical services, and finance. (Contributions from the last are credited with salvaging Beijing’s growth goal last year.) The 75% share of private employment enjoyed by leasing and business services suggests the comparatively greater strategic importance with which the others are viewed.

Modern service sectors tend to be higher value-added segments of the economy and are typically more dominant in exactly the sort of developed economies that Beijing wants China to become. In lieu of better employment statistics, the share of fixed-asset investment (FAI) for these and other sectors from state-controlled firms can serve as another proxy for party-state dominance therein.

Looking at FAI in these four sectors suggests real private investment gains, if not as drastic a ceding of territory by the state as has occurred in manufacturing. In scientific research and technical services state-controlled FAI fell from more than 52% in 2011 to just over 35% in 2014; in leasing and business services, the state’s share
fell from 39% to about 27% for the same period; in information technology and financial services state-controlled FAI for both fell from just above 60% to just short of 50% in 2014.

Service sectors in which state FAI investment accounted for more than half of the annual total in 2014 include transport and logistics, education, health and social services , utilities production and supply and construction. Still, in nearly all of these sectors the state share of total FAI decreased over the period from 2011 to 2014, suggesting broad if varied gains by private business.

But in these and other areas of enterprise, looking only to FAI figures may understate state control. For example, state FAI in financial services was just below half the total at 49.9%, yet Beijing’s effective control extends even to private institutions such as China Merchants Bank and Ping An Insurance, which require regulatory approval to continue their operations. Securities firms, too, have felt the burden of state control grow heavier of late as reports have surfaced of regulators ordering mainland brokerages to buy Shanghai and Shenzhen-listed equities following the stock market’s summer collapse.

State-controlled FAI of 22.6% in real estate services belies the importance of political pull for success in the sector, as demonstrated by Dalian Wanda’s famously well-connected founder, Wang Jianlin. Further complications are introduced by the state’s omnipotence in matters of land ownership – often manifested in its ability to swipe rural land from peasants and reclassify it as urban to take advantage of the resulting lucrative development opportunities. “Real estate is tricky,” Hubbard said, “given that some SOEs have done lots of real estate development when they technically weren’t allowed to, so data quality is not good.”

And while the category of culture, sports and entertainment shows state-backed FAI falling about 5 percentage points to roughly 43% of the total from 2011 to 2014, few outside of op-ed columnists at party newspapers would argue that the government has not tightened its grip on every facet of Chinese media in recent years.

Although recent years have seen the concept of “mixed ownership reform” at state-owned firms parroted and praised in state media, in practice that mixing of ownership has proven either too small-scale or too state-backed to have a real impact on how the firms in question are controlled and run. More instructive for a given sector is whether state firms are the only game in town.

A 2015 policy briefing on state reform in China’s service sector published by the Peterson Institute for International Economics (pdf) highlights how private investment in the tertiary sector lags behind that in manufacturing due to restrictions that keep private firms out in order to protect state-backed firms from competition.

The upshot is that this presents policymakers with an opportunity for productivity gains by allowing greater private participation in the service sector. Yet while some progress has been made on this front, even China’s greatest success stories in private enterprise have been informed by the explicit and unspoken limitations imposed by the state. Nor does private ownership provide an exemption from party supervision: Statistics provided in July by the party’s Central Organization Department indicated that 53.1% of China’s non-public enterprises have established party organs.

All the more reason for Alibaba founder Jack Ma to chose his words carefully. During a November interview at the Asia-Pacific Economic Cooperation summit in Manila, Ma told listeners he viewed trade as “a human right”. That is about as far as Ma is likely to go on the issue of rights in light of his company’s extensive and increasingly complex relationship with the government, one now every bit as fraught as the land rights of a peasant in China’s countryside.

“It’s good business sense to support the party,” Howie said. “Jack Ma is not going to push for a free press or Internet because his operational freedom will be curtailed if he does so. Alibaba is private, but very much influenced by politics. And, at least to me, it’s not private in that he can sell control of his company and it can’t be bought by a foreigner—or maybe even another Chinese.  The party would not want to lose influence over such a major player in the modern economy.” ♦