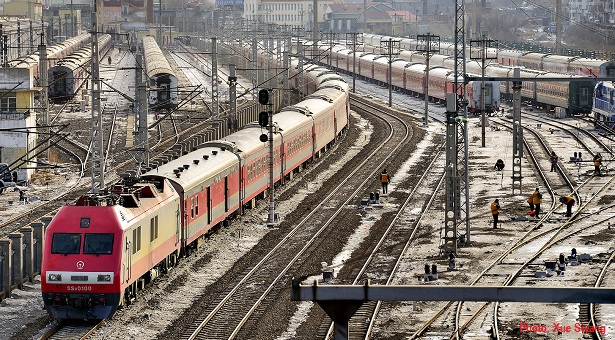 From a typical business perspective it might sound troubling if the best news you can offer is that profits aren’t falling quite as fast, but that is the case at many of China’s state-owned firms.

According to a recent announcement on the Ministry of Finance’s website, profits for the first five months of the year at non-finance state-owned enterprises (SOEs) fell only 3.3% compared to the same period in 2014. That dip in public sector profits was relatively minor compared to a 5.7% fall in the first four months year-over-year, or 8% in the first three—or 21.5% during the first two months. The only gains came from local government-owned firms (2.1%) while profits at central government-owned firms fell 5%.

Such figures may be one reason for Beijing’s ambition to pare down the number of conglomerates under central government control from 111 to between 40 and 50. And based on reforms and reports made to date, China’s state sector can prepare for the introduction of mixed state and private ownership, regrouping of firms by function, employee shareholders, and the restructuring and merger of companies within some sectors to create new conglomerates.

But consolidation alone can’t eradicate corporate bloat, and may simply facilitate the flow of cheap financing from Beijing to a smaller number of corporate giants whose excess bulk goes largely untrimmed. Less competition for business abroad could also potentially give state firms an edge over foreign competitors that have to worry more about hard budget constraints. Moreover, the latest interventions in the mainland’s stock market seem to indicate the party wants the state to retain decisive control over market forces rather than the other way around. The market may yet play a larger role in some sectors, but profit is far from the sole aim of new reforms, and the state isn’t about to beat a retreat from business altogether. The government’s all-too-visible hand will continue to play a major role in broadly directing economic development.

“Both economic and political factors motivate the consolidation approach to SOE reform,” said Wendy Leutert, visiting researcher at the China Center of the Brookings Institution and Ph.D. candidate at Cornell University. Leutert said mergers help avoid the politically sensitive possibility of closing down state firms and asset sell-offs that could raise fresh corruption concerns. Control over the top-level design of new reforms remains concentrated in the hands of a “leading small group” chaired by President Xi Jinping. Mergers may also make the remaining fewer firms easier for top leaders to oversee. Whether this all ultimately makes the firms more efficient and profitable is another matter.

“It’s just consolidation—there’s not too many signs of genuine reforms,” said Victor Shih, associate professor at the University of California in San Diego and longtime observer of China’s financial system. Even after the changes made and mooted to date, Shih said, many of the structural problems inherent to state companies will remain: “They’re still SOEs.”

Not (always) for profit

The modern origins of China’s present-day government-run conglomerates go back to the late 1990s, when smaller state-owned firms were privatized or shut down as larger firms merged to create giant industrial groups. According to an overview by Chang-Tai Hsieh and Zheng Song at the University of Chicago’s School of Business, reforms from 1998 to 2007 helped improve labor productivity at state-owned firms, and were responsible for 20% of aggregate total factor productivity growth for the period.

A memorandum for The Paulson Institute by Andrew Batson, director of China research at research firm Gavekal Dragonomics, agrees that policies introduced in the late 1990s helped produce SOEs that were financially stable, commercially viable, and concentrated in economic sectors viewed as vital to national security. Batson argues, however, that this model was deteriorating by around 2003 and more markedly since 2008, when in response to the global financial crisis the central government loosened monetary policy, lowered lending standards and kicked off a vast suite of infrastructure projects.

“Profitability has never been and won’t be the primary consideration for companies engaged in providing public services like national defense or utilities,” said Leutert. That makes a lack of concern about profit more of a feature than a flaw for many state firms.

The merger of China’s two state-owned rail companies – China CNR and CSR Corp – was framed as an exception: Officials have stated these firms had been undercutting each other in bids abroad, undermining one another’s profitability and harming the state in a cycle economists call ruinous competition. Not everyone agrees.

“The whole argument is ridiculous,” Shih said. “The reason there was ruinous competition between those two companies is because they had a soft budget constraint, and they could borrow as much money as they wanted at very low interest rates from the banks.”

Once more from the top

Such perverse incentives seem of little concern to top leaders, who have stated in policy and major meetings that, in effect, the cure for what ails China’s state enterprises is more state and less enterprise. While reforms had been in the cards since the start of Xi’s term, they only began to be laid on the table this year. In January state media claimed that Xi told a meeting of the party’s discipline commission that party control of SOEs should be intensified, with supervision of company bosses strengthened.

That move fits in with a general push to centralize power that had already extended to various governing bodies through ‘small leading groups’ headed by Xi and his deputies. Robert Blohm, a Beijing-based economist and industry consultant, said Xi’s approach to SOEs differed from the technocratic, hands-off style of his predecessor Hu Jintao primarily in prioritizing control. Xi most recently drove this point home in a recent speech calling for stronger party leadership at government-run firms during a politburo meeting at which unspecified documents on SOE reform were approved.

Blohm said that if SOEs are to act as tools to help the government realize an agenda of international preeminence, “in that role you need scale.” Thus mergers make sense as a means to create national champions that won’t have to worry about competition at home. If that means the resulting firms operate even more like arms of the government, so be it. “For privatization of public finance, the government seems to prefer the public-private partnership route,” Blohm said.

That plank of the program came into view in May, when the National Development and Reform Commission invited private investors to help build, fund and operate a list of 1,043 projects worth a total of RMB1.97 trillion (US$317.75 billion) throughout China. These public-private partnerships seek to improve government firms’ balance sheets by offloading potential debt onto private sector companies in exchange for project rights. Th
ey may also help fund projects that new restrictions on local governments’ off-balance sheet borrowing might otherwise preclude—provided willing private partners can actually be found.

This is all accomplished without any of the greater privatization measures that might actually make SOEs less beholden to any shareholders who aren’t the party itself. Bringing in sizable blocs of private and foreign shareholders could potentially result in more authority for boards of directors filled by private sector, profit-minded investors who could demand things like the right to hire and fire top executives. Reforms to date look to do just the opposite.

Late last year The Wall Street Journal reported that the Communist Party planned to slash top executives’ salaries at the biggest SOEs to ensure those in power valued politics more than their own pay. In early March it was said to follow through on that threat when Bloomberg reported that total annual compensation for senior managers at the country’s five largest lenders (all government-run) had been cut to no more than RMB600,000 (about US$95,800).

This isn’t the first time attempts have been made to pare down SOE numbers in one form or another. An April report (overview) published by the Brookings Institution found that SOE numbers had actually dropped from 2004 to 2010, even as the number of their subsidiaries skyrocketed during the same period. But ending overseas competition considered needless by the government won’t solve the problem of profligate borrowing by state firms. Shih, at UC San Diego, said that conglomeration might help avert ruinous competition in some cases, but “the tendency to borrow money and expand as much as possible will still be there.”

For example, he said, now that the two state rail firms have merged, the new entity can go to banks and point to directives prioritizing rail development both in China and abroad to justify more loans without worrying about another firm trying to undercut it. Central government-owned SOEs operating in areas designated as priority industries in particular are privileged with access to cheap financing and, potentially, the ability to sell products at a loss.

“As long as the Chinese banking system can give them limitless money, and because they don’t care about the bottom line, they’re going to be very competitive because they can undercut competitors who do,” Shih said.

It is not clear where or even whether China’s banks could one day draw the line when unprofitable SOEs ask for more low-interest loans they might not pay back. Likewise, when exactly structural reforms will arrive and whether the firms they produce focus more on policy or profit remains uncertain. In June the Beijing Times reported that SOE reforms were expected to be announced this month, but this week state media began to circulate a story from the overseas edition of the People’s Daily whose headline asserted only that such reforms would pick up speed again “within this year”.

Yet so long as the party retains control over the financial system state and commercial banks will have to lend on command, and based on the latest government drive to salvage China’s stock markets, firms both public and private can still be pressed into the service of the state when it decides a cause is critical to the country’s interests.

The market could still become a decisive presence in China’s economy one day. But when that day comes, SOEs could still be doing much of the market’s decision-making for it. Or as Xi Jinping was reported by Xinhua to have told workers in Jilin province today, “state-owned enterprises are the backbone of the national economy.” It doesn’t get much blunter than that. ♦