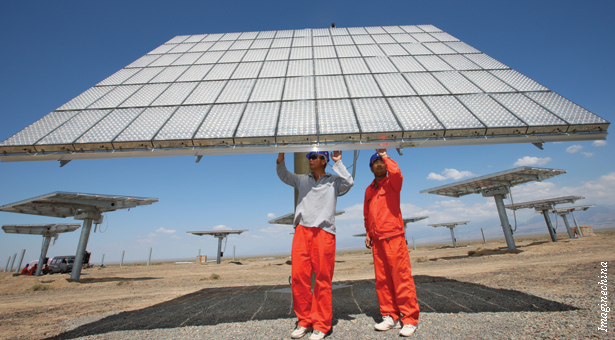 The demise of Suntech, a Chinese solar company, will be a familiar story for American readers who followed the bankruptcy of US-based Solyndra: the rare toppling of a government-backed high-tech champion. The difference is that Suntech is a much large company, and when it goes under, it will likely take far more government and shareholder funds with it.

Suntech’s undoing has not been short on drama, what with the noisy removal of its founder, Shi Zhengrong, from his position as chairman earlier this month. On Wednesday, news broke that the company’s main China unit would go bankrupt after failing to make a payment on a maturing US$541 million bond due March 15. Suntech’s shares plummeted to US$0.59 at market close on Wednesday, down from an all-time high of $88.35 in 2007.

There are many reasons for Suntech’s collapse. For one, Shi was known more for his scientific ability than his business sense. But most of the blame should be laid with Chinese policies.

With Beijing’s approval, local governments engineered an exponential increase in China’s capacity to make solar panels. Suntech’s solar module capacity more than quadrupled between 2007 and 2011 to 2,400 megawatts, making it one of the world’s largest solar product manufacturers.

The company used this massive supply to deliberately push down prices and capture market share, at the expense of its own and others’ profit margins. “Solar manufacturing over the past eight years has been an excellent way to turn a big fortune into a small one,” Bloomberg quoted Jenny Chase, lead solar analyst at Bloomberg New Energy Finance in Zurich. Solar cells cost roughly US$0.38 per watt in March, just a fraction of the US$1.50 price tag in October 2010.

That strategy ultimately proved fatal for Suntech. Its debts spiraled to roughly US$2 billion by the end of August, compared to a net cash position of only US$244 million. On Monday, Chinese banks petitioned a court to declare the company’s Jiangsu province-based business, Wuxi Suntech, insolvent.

A conglomerate owned by the Wuxi government will take over Wuxi Suntech, which employs roughly 10,000 people locally. The company said that its parent, Suntech Power, would not go into bankruptcy, sparking fears that Suntech’s assets – which are mostly tied up in Wuxi Suntech – will be dissolved to pay back Chinese creditors, while foreign lenders will be left with the losses.

Suntech’s offshore debt is considerable. The US$541 million in convertible bonds due this month were issued by Suntech’s listed unit, which is registered in the Cayman Islands. The bonds are mainly owned by US-based specialty shops or distressed funds, including Mount Kellett Capital Management, Driehaus Capital Management, Pioneer Investment Management and Silverback Asset Management, according to data firm Ipreo. The Cayman Islands’ unit holds about half of Suntech’s total debt, according to its filings with the US Securities and Exchange Commission. In addition, it has raised US$743 million from Wall Street in two separate stock offerings, one in 2005 and another in 2009.

Suntech itself has implied that its offshore bonds are not likely to be repaid. The company said in the presentation to investors last November that “loans may be available to refinance existing bank debt as it matures, but credit support to repay offshore debt is not available.” At the time, Suntech said it didn’t think it could issue bonds in China to raise cash, and that it didn’t have assets it could sell to repay the debt. Instead, it said it might restructure its foreign debt.

Suntech seems likely to offer bond holders a bond with a longer maturity as well as an equity stake in the company. But as the company continues to flounder, these may ultimately be worth little to nothing. US bondholders are preparing to sue Suntech, but because Chinese courts mostly ignore foreign judgments, it’s unlikely that any ruling in Cayman Islands’ courts could force Suntech to pay US investors back.

If Suntech’s foreign investors lose out, that will be a clear warning for investors in other Chinese companies. The market has long speculated about the risks of investing in Chinese technology companies, such as Baidu and Sina, that have listed in US markets through a variable interest entity structure that have operated in a legal gray area.

US-listed shares of other Chinese companies will certainly suffer. A significant share of Chinese companies that have listed in New York have done so through a shell company in the Cayman Islands or another offshore jurisdiction. Legally, there is little to prevent a Chinese company from walking away from its agreement with the US-listed partner, a point the
Suntech case may drive home to investors.

If China’s growth slows in coming years, the market could see a wave of bankruptcies. Risks are particularly acute in the highly leveraged solar sector: China’s ten largest solar companies had combined debt of US$17.5 billion at the end of the first quarter of 2012, according to investment bank Maxim Group. If companies begin to succumb to their debt loads, all investors will suffer. But investors in the US-listed arm of any heretofore government-backed champion could particularly stand to lose out.