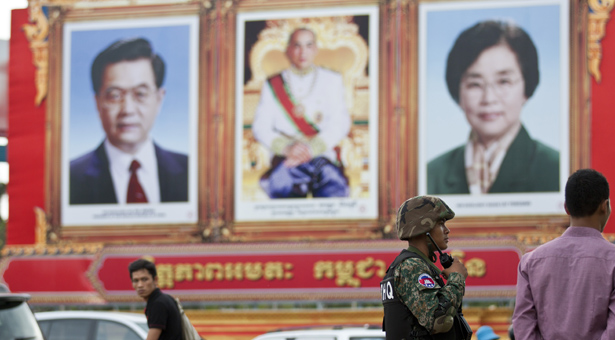 Regional leaders will not soon forget the Chinese flags and towering portraits of outgoing Chinese leader Hu Jintao that met them upon their arrival in the Cambodian capital of Phnom Penh last April. Hu’s Cambodia visit concluded only one day before the start of an Association of Southeast Asian Nations (ASEAN) leadership summit.

Suspicions that China’s visit was no more than a lobbying ploy were confirmed when, during a July summit, Cambodia blocked discussion of China’s territorial claims in the South China Sea. ASEAN members including Vietnam, the Philippines, Indonesia and Brunei dispute China’s claims, but Beijing has thus far refused multilateral talks, preferring bilateral discussions instead. In the end, the dissension stopped regional leaders from issuing the annual communiqué that has signaled a degree of political accord for the last 45 years.

Keeping the dispute over the resource-rich sea off ASEAN agendas last year was no small feat of renminbi diplomacy. But unfortunately for China, an opportunity to similarly undermine the best interests of the 10-member bloc using its close ally could be a decade away. Early this year, Cambodia will hand over chairmanship of the economic bloc to Brunei Darussalam, a small littoral sultanate which also lays claim to shoals in the South China Sea.

The leadership change will give China far less room to maneuver. Lavishing the new chairman with concessional loans and investment – as China did to Cambodia with hundreds of millions of dollars in loans in 2012 – likely would not sway the wealthy state of Brunei. The days when the arrival of a Chinese leader can put an end to formal discussion are over. Instead, Beijing should expect more official dialogue about the South China Sea disputes at ASEAN forums over the next year.

China will hardly give up its territorial claims, but the transition will be an opportune moment for China to reconsider the style of its approach. China’s divide-and-conquer strategy has pitted it and Cambodia against the Philippines, Vietnam, Brunei and even moderate Indonesia, as well as attracting US attention in the region.

The divisions have likely hurt the region economically. At an Asian Development Bank event last year, Chinese Academy of Social Sciences Professor Yu Yongding said ASEAN’s economic integration will be difficult if the territorial disputes continue. Though the professor did not intend to point a finger at China, the comment was spot on. The South China Sea issue is driving a wedge between Southeast Asian nations at a time they should be focused on cooperation.

ASEAN, a region encompassing 10 countries and 600 million people, is still racing to form customs, banking and logistical networks with the hopes of greasing regional and international trade. This requires close cooperation between the central banks and customs regulators in countries divided by decades of uneven development. The countries will likely falter in achieving a high level of connectivity by a self-imposed 2015 deadline, and the dispute could continue to hamper progress beyond that point.

For a lesson on the economic costs of political disputes, China need only look some 2,000 kilometers northeast to the far more vitriolic spat with Japan. The dispute over the Senkaku/Diaoyu Islands in the East China Sea has taken a major toll on commerce between the two countries. Although Japanese exports have suffered far more than those from China, Chinese businesspeople doing business with Japan have certainly felt the brunt of the unproductive tussle.

The rotation of the ASEAN chairmanship means China will have to adopt a more holistic approach in its relationship with ASEAN. If well executed, this shift in attitude could come with economic benefits. As China’s largest Asian trade partner, and its third largest partner globally after the EU and the US, ASEAN has already proven itself of great commercial value to China. Bilateral trade was worth US$362 billion in 2011 and forecast to hit US$500 billion in 2015.

Under the new leadership, the first order of business regarding the seas will likely be a code of conduct for nations that patrol the seas. Rather than opposing this framework altogether, China should negotiate for the best deal that preserves its sovereignty to the highest degree possible, or leaves it out, while at the same time setting rules to avoid naval stand offs and keep trade freely flowing.

Cambodia is using China’s financial largesse of 2012 to build much needed roads, dams and other infrastructure, something the region as a whole could similarly benefit from if tensions over South China Sea calm. If that happens, Chinese flags might be welcome in capitals throughout Southeast Asia.