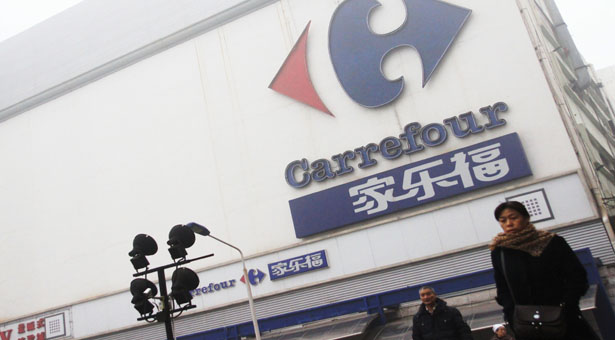 Western visitors to Nonggongshang Supermarket, a chain of around 2,200 supermarkets in China, can quickly spot differences from stores back home. Aisles are cramped and sometimes dusty; boxes and crates of discounted goods clutter the floor. But only retail industry insiders are likely to spot the biggest difference with Western markets: That the mid-sized Nonggongshang stores can survive – much less thrive – with a massive Wal-Mart just steps away.

In mature economies, competition usually whittles the low-cost retail sector down to a handful of big players – think Wal-Mart, Target and Cosco in the US, or Tesco, Asda and Sainsbury’s in the UK. These cookie-cutter hypermarkets are also being transplanted across China. Yet their business model – using vast economies of scale to drive down prices and undercut small competitors – has not worked in China, or at least not yet.

Consumer demand, logistics and regulation vary so widely within China that the scalable hypermarket model has proved less effective. Cookie-cutter stores also lack either a clear cost advantage or locally-tailored merchandise. The result is that hypermarkets make fewer sales per store in China than in other international markets, while smaller local rivals continue to thrive.

“Even though Wal-Mart, Tesco and Carrefour are incredibly large and incredibly powerful on a global scale, that doesn’t matter much in China,” said Neil Stern, a senior partner at McMillan Doolittle, a retail consulting firm.

Carrefour was the first big Western hypermarket to enter China in 1995, followed by Wal-Mart and Metro in 1996 and Tesco in 2004. All four companies pursued a similar strategy: Establish bases in the wealthy first-tier cities of Beijing, Shanghai and Guangzhou, then make forays into smaller cities. Wal-Mart now leads the pack with around 380 locations in China, followed by Carrefour with 204 stores, Tesco with 105 and Metro with 52.

But Western retailers have failed to capture the market. The top three companies in China, Wal-Mart, Carrefour and Tesco, together account for less than 15% of foreign supermarket sales, according to a report last year by research firm Kantar Worldpanel. Even those small footholds are shrinking: While most Western hypermarkets are recording revenue growth in the upper-single digits in China, the overall retail market expanded an astonishing 17.1% last year. Wal-Mart’s head of international operations, Doug MacMillion, said in April that the company’s presence in China is “just nowhere near what it could be.”

These woes stem largely from the big disparities between Chinese consumers and shoppers elsewhere, said Stern of McMillan Doolittle. Western customers tend to visit hypermarkets on a monthly or bi-monthly basis and fill their cars with items to stock up the pantry. By contrast, Chinese consumers shop more frequently but spend less per visit, often lured in by “loss leader” sales which are unprofitable for the company.

Chinese consumers are also less comfortable with the standard Western big-box retail setup. For decades they have shopped at wet markets with live fish and fowl, and they are generally willing to tolerate a louder, more chaotic atmosphere, said Phil Smiley, CEO of research outfit Kantar Retail Asia Pacific. He pointed to mainland China’s RT Mart – owned by Sun Art, a joint venture between French retailer Auchan and a Taiwanese firm Ruentex – as a retailer which is winning market share because it has successfully created a “halfway point” between traditional outdoor markets and the typical Western hypermarket.

But a bigger problem than tweaking merchandise and store layout is that retailers have yet to achieve the scale to make their core business model work. Current store numbers are “ludicrously small” for a country of China’s size, said Torsten Stocker, an Asia-based partner at consultancy Monitor Group. Wal-Mart entered Mexico just five years before it entered China, but it already has over 2,000 outlets in the Latin American country.

Store count is important in low-cost retail: More stores cut overhead costs on nationwide logistics and operation networks and give companies leverage over suppliers. These economies of scale result in lower prices that blow smaller competitors away. To that end, Western hypermarkets have been trying to expand further, despite difficulties acquiring permits and suitable land. More stores will no doubt bring benefits, but Stocker said he doubts they can dramatically lower prices and eliminate smaller rivals. Shopper tastes, regulation, logistics and even media in China “vary so much from location to location that it’s difficult to have a scalable, uniform, go-to-market approach,” he said.

There are no obvious fixes for foreign retailers. They could stop stretching themselves thin across the country and instead concentrate on building scale in a select region – but that would concentrate their risk. They could decentralize by allowing local store managers to select merchandise appropriate for local consumers. But not only would decentralization give up economies of scale, it might present more opportunities for corruption – no small threat in China, and a sensitive topic for the industry after Wal-Mart was accused in April of being complicit in widespread bribery by a Mexican affiliate.

The best bet for international retailers might be to simply buy their way into the market. The next five to seven years could see a period of intense consolidation in China’s retail sector, said Smiley of Kantar Retail. But while mergers and acquisitions are the fastest way to gain scale and market share, they can be ugly. Wal-Mart’s US$1 billion purchase in 2006 of Trust Mart, a Chinese chain with over 100 stores, for example, was a fiasco in execution. The operations remained independent but lost customers as store formats changed.

Whether by mergers and acquisitions or new store openings, aggressive expansion in retail requires large dollops of capital. Here the prospects of Western retailers in China diverge. Tesco said this year that it will re-invest in its flagging UK stores, and Carrefour is suffering nearly everywhere it operates. Only Wal-Mart has both steady business and the access to capital. In addition to its ongoing new store expansion, in February the company acquired Yihaodian, a fast-growing online retailer, and has hinted interest in Sun Art.

“A famous retailer in Canada once said, ‘The more horses I have on the track, the better chance I have to win,’” said Stern of McMillan Doolittle on Wal-Mart’s acquisitions. “The more bets they can make, the better the chances they’re going to be somewhere in the right place.”

Many global hypermarkets were once scrappy rural outfits that outmaneuvered bigger department store rivals through superior cost-cutting business smarts. Yet their fate in China may have less to do with their business model and more to do with how much money they have in the bank.