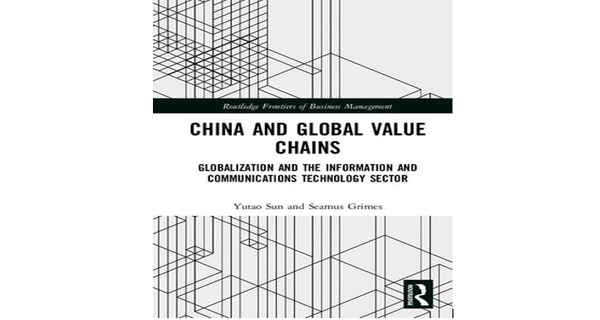 In their new book, “China and Global Value Chains”, Yutao Sun and Seamus Grimes provide a forensic analysis of China’s participation in Global Value Chains (GVCs), which has been a crucial driving force behind China’s spectacular development.  GVCs enabled China to average annual economic growth rates of 10 percent over three decades, and the still very respectable 6-7 percent of recent years.  As Sun and Grimes argue, China is now faced with new challenges, as it seeks to extract greater benefits from GVCs, and also as it must deal with the threat of US President Donald Trump to bring back home America’s offshored manufacturing production.

A key element of China’s development process was the gradual opening to foreign direct investment (FDI) and trade from 1978, something which accelerated following the country’s membership of the World Trade Organisation (WTO) in 2001, as the authors document.  China received vast inflows of FDI, notably from technology companies — the GVCs for Apple’s products are very much the focus of the study.  Such companies were motivated by China’s low cost structures, as well as the many incentives offered.

Apple’s production line ultimately became highly fragmented, with most low value-added assembly operations taking place in China, conducted by Foxconn, a Taiwanese company, which is now the world’s largest electronics contract manufacturer.  High value-added components are mainly sourced from Korea’s Samsung, and Japanese and Western companies.  The centre of gravity of both Apple’s and information and communications technology (ICT) GVCs more generally has shifted to China in recent years, as Sun and Grimes document.

This participation in ICT GVCs has been hugely beneficial to China in terms of boosting the economy and reducing poverty.  There can also be passive knowledge and technology transfer, especially through Chinese workers based in Foxconn’s factories.  But as Sun and Grimes highlight, China finds itself in a subordinate position in these ICT GVCs which are led by foreign investment enterprises.  And China is extracting very low value out of the GVCs.  Despite locating much of their production activity in China, foreign investment enterprises have succeeded in avoiding any major leakage of intellectual property to local competitors.

China’s rapid development has been very different from that of Japan in the 1980s, according to the authors.  More than 80 per cent of the top exporters from China to the US are foreign investment companies.  In contrast, most of Japan’s big exporters in the 1980s were Japanese, and Japan added most of the value to exported products.  China’s development is driven by inward FDI and being an export platform for foreign companies, whereas Japan’s resulted from exporting products based on licensed technology.

It has long been China’s goal to improve its technological capacities and intellectual property, as it seeks to climb the development ladder.  The Chinese government is also concerned about the national security dangers associated with high levels of dependence on foreign technology sources.  But as Sun and Grimes note “China failed to achieve significant technological transfer from foreign companies through insisting on the establishment of joint ventures with Chinese companies”.

However, “Despite its ongoing dependence on foreign technology, China is determined to transition to an innovation-oriented development model”, the authors argue.  So to avoid falling into a “low value-added trap”, the Chinese authorities are promoting “indigenous innovation”.  This is a new kind of protectionism which seeks to assist local industry climb the value chain and improve technological capacities.  It also involves strong-arming foreign investment companies to share technology, and set up China-based research and development centers.  The attraction of China’s large and emerging middle class market gives it a big pot of honey which can be used to attempt to subjugate multinational enterprises.

Sun and Grimes do not seem fully convinced of the merits of this approach.  “There are signs”, they say, “that China’s progress could be slowed down by its opting for a more inward model of technology autonomy within a relatively protected large domestic market”.  They do recognise, however, that a small number of Chinese companies, like Huawei and Tencent, have become highly successful global brands.

The authors also pour cold water on Donald Trump’s vision to bring outsourced manufacturing back to America.  In their quest for higher dividend payments, shareholders of companies like Apple pressure management to find the best locations for each production phase of the GVC, even though that may result in their fellow citizens losing their employment.  And with rising costs, China is no longer competing on the basis of its low cost location alone, but also its high quality workforce and its large domestic market.  But the burgeoning protectionism in Western markets could pose a great challenge to China, as a latecomer country.

Sun and Grimes analysis is excellent in that it is based on the sound theoretical framework of GVCs, extensive data, and many interviews with corporate executives.  It may be a bit heavy going to read in parts.  But it is most certainly worth the effort.

John West is Adjunct Professor at Sophia University, Tokyo.  He is the author of the recently published “Asian Century … on a Knife-edge — A 360 Degree Analysis of Asia’s Recent Economic Development.”