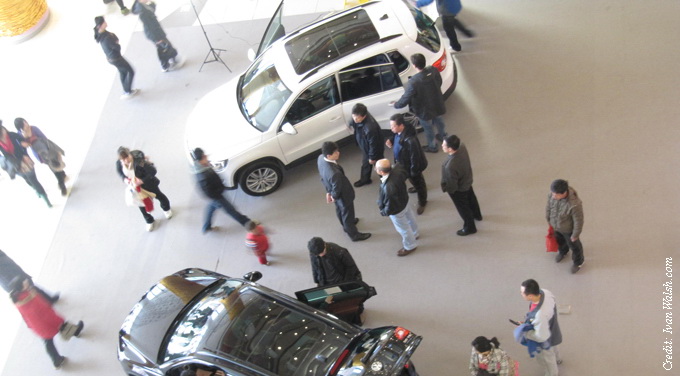 This antitrust probe might not be as painful as it sounds

Running from a shakedown involving Chinese regulators might seem like the smart thing to do but the buzz generated by media headlines is sometimes louder than its bite. In the past two weeks several large foreign automakers including Fiat’s (F.BIT) Chrysler, Volkswagen’s (VOW.ETR) Audi and Daimler’s (DAI.ETR) Mercedes-Benz have been targeted by antitrust officials over the pricing of spare parts. All three have seen their share prices decline this month. “We see the real risk of major OEMs (especially premium OEMs) being fined for AML (anti-monopoly law) violations according to the precedence of the milk powder industry,” analysts at Barclays Research in Hong Kong said in a note. “But the entities affected will likely be the foreign OEMs’ holding companies of the JVs, rather than the JVs themselves given the focus of the investigation on spare parts and imported vehicles. Yet the investigations will have only limited impact, the analysts reckon. Spare-part sales only account for 1.8%-3.6% of OEMs’ revenues, so lower spare-part prices would only marginally affect OEMs’ revenues. The impact on car sales would also be limited, as the investigation doesn’t jog up the fundamental supply and demand picture. “We believe the best opportunities tend to emerge when market is unanimously bearish – and may we suggest a little fearlessness when others are fearful.” The real impact could come if the current regulations are rectified, the spare-part market is opened to third-party vendor or independent service shops are given access to all spare parts. However, Barclay Research doesn’t expect regulations to change in the near to medium term, as regulators are still concerned about the quality of spare parts. Local companies with multinational joint ventures such as Dongfeng Motor (0489.HKG), Brilliance (1114.HKG) and GAC (2238.HKG) are preferred while there should still be caution on purely-local players.

Who is cheering for China’s emission reduction policies?  Ordinary people of course and, well, China’s liquefied natural gas (LNG) industry. Riding on recent government efforts to slash pollution and cut car emissions, China’s LNG suppliers are gaining government favor, as the fuel produces zero PM2.5 emissions, the reduction of which has become a key performance index for local governments. UOB Kay Hian sees an all-bright prospect for China’s LNG sector, which is still in its infancy, and storing momentum for future growth. “We believe the LNG industry has much room for development, and expect the total number of LNG vehicles to exceed 200,000 units and LNG consumption to double from the 2013 level to 15b cum in 2015,” UOB Kay Hian said in a note on Tuesday. The diesel price hike has also acted as a catalyst to boost LNG consumption. “More and more logistics and public transportation companies and private vehicle owners now prefer LNG-powered vehicles over diesel-powered ones due to the larger fuel cost savings offered by the former,” UOB Kay Hian explains. They maintain their “overweight” rating on China’s gas sector and recommend investors to buy Kunlun Energy (0135.HKG) and ENN Energy (2688.HKG), both of which are major beneficiaries from increasing transport-use LNG consumption.

Picking stocks can be like picking what to wear. Sometimes the choice is overwhelming, other times you have to be careful what you reach for. That’s pretty much the feeling with luxury brands these days amid slowing consumption in Asia in general and in particular China’s ongoing anti-corruption campaign which no signs of slowing despite the capture of the “tiger” Zhou Yongkang. The pain on sales has been felt by brands including LVMH (MC.EPA) and Hermes (RMS.EPA). But they are super-conspicuous brands characterized by their ostentatious style and large logos; people buy them to be seen wearing them. So the decline in China sales and subsequent impact on their earnings doesn’t come as a surprise. But Italian brand Prada (1913.HKG) is different, and many analysts saw it as less susceptible because it is understated and less flashy than other marques, attracting less attention. So, while looking to play the China consumer story this year, it’s been a popular pick. That view is changing – the company just posted the slowest half-yearly sales growth in three years. “With the sustained negative drivers, including weakening growth of Chinese tourists’ travel flow [and] spending, sluggish local consumer climate in its home market, operating cost pressure … and euro currency strength, we believe Prada’s earnings outlook will remain subdued,” analysts at BOCOM International wrote in a note this week. They have a “sell” rating on the stock. Even if cadres still wear Prada, it might not be enough to offset the weak earnings from other factors, such as a slowing overall Chinese economy that is suffering from weaker luxury consumption.

The only mainland-China related listing in Hong Kong next week is that of China Rundong Auto (1365.HKG), a dealer of luxury autos backed by private equity giants KKR. Despite slowing luxury consumption the Jiangsu-based company’s net profit more than doubled to RMB248.4 million (US$40.2 million) last year from RMB91 million a year earlier, while sales rose 23.5% to RMB11.6 billion, according to its prospectus.