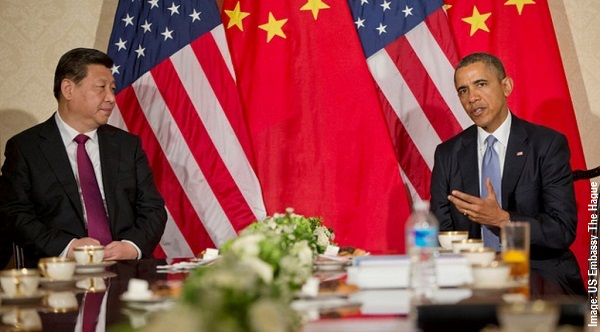 Previously in part 1 of 3: Forecasting an apocalypse

During November’s APEC meeting in Beijing, Xi Jinping made a joint statement with US President Barack Obama heralded as “historic” by many headlines that followed. While it may prove historic, for China the statement did not entail any sort of commitment to decreasing total emissions. In the statement itself, the PRC explains that it “intends to achieve the peaking of CO2 emissions around 2030 and to make best efforts to peak early.” But no figure was given for said peak, and “around” 2030 could mean years before or after the turn of that decade.

The statement also says China “intends to increase the share of non-fossil fuels in primary energy consumption to around 20%” by 2030. While not actually a binding pledge, bringing so much more non-fossil fuel energy into play—including nuclear, which China is keen to develop domestically—would be an incredible gain over these sources’ share of 10.95% in 2013. Greenpeace climate and coal policy researcher Li Shuo told The New York Times shortly after the announcement that China would need to add 800-1,000 gigawatts of power generation capacity from renewable sources in the next decade-and-a-half to meet the goal, a figure made more remarkable by the fact that the country’s current capacity tops out at about 1,250 gigawatts from all sources, including coal.

However, even these gains would only mean a decrease in emissions if energy demand stopped growing. It is true that increases in renewable energy for China to date have been impressive, and in terms of sheer scale put most other countries to shame. But these have yet to put a dent in China’s rising emissions: Between 2003 and 2013, renewable energy’s share of total energy consumption in China grew from less than 1% of total energy consumption to 3.83% even as annual CO2 emissions more than doubled over the same period, from roughly 4.34 gigatons to 9.53 gigatons, according to the latest figures from the BP Statistical Review of World

Similar issues arise when pinning hopes for decreased emissions on the “decoupling” of GDP from carbon emissions globally, and the case of China is no exception: In its 2012 report, China 2030, the World Bank suggested that carbon emissions (and pollution) were increasing for China at a pace slower than economic growth in such a way that meant high growth was compatible with lower carbon emissions. That would mean China (along with other BRICS countries) could remain economically competitive by continuing on its established development path without much worry, since greater energy efficiency would naturally, gradually reduce its CO2 footprint.

Man with a plan

Even so, Jiang Kejun, a fellow at the Energy Research Institute at China’s National Development and Reform Commission (NDRC), said he believed China could still do its part to keep global carbon emissions down in line with the goals set forth by the UN International Panel on Climate Change. For Jiang, peak CO2 wasn’t a matter of how soon, but as soon as possible.

“The question for us is how early we can reach the peak,” he said, adding that “2030 of course is not our target.” Jiang was careful to note that his views were not necessarily those held by the NDRC, but was willing to offer his own opinion on when China ought to hit peak carbon. “If you ask me as an expert, I think I’d prefer to say China should peak its CO2 emissions before 2025,” he said, adding that China’s CO2 emissions from electricity production ought to peak at around 9 gigatons.

But Jiang warned that these targets face serious resistance. While strict and effective carbon control was possible for China, he said, middle-level policy makers in the government, including some under the purview of the National People’s Congress, were still too focused on the economy. “It will still take some time to go ahead with, for example, how to make real carbon pricing—emissions trading or a carbon tax—happen. We do see very big barriers from the middle level of government,” Jiang said.

The bedrock of top Chinese leaders’ legitimacy, though, is continued growth. Barring economic disaster, the country will continue to demand more and more energy, and in lieu of a cap like that described by Jiang, this means it will likely devour more of the most carbon-intensive and dirtiest fossil fuel: Coal. Whether this is viable depends to a great degree on public opinion, which in recent years has become less tolerant of the commodity’s carcinogenic fallout.

The cost of cheap coal is well-known in China. Outside of what are now termed “airpocalypses”, major population centers throughout the mainland face daily levels of dangerous airborne pollutants well above the World Health Organization’s recommended levels. The bodily harm from severe pollution produced by coal-powered energy plants was even quantified in a 2013 study published in the Proceedings of the National Academy of Sciences that estimated air pollution had hacked off an average five-and-a-half years from the life spans of those living in China’s coal-suffused North when compared to those living in its relatively less-polluted South.

From these and a litany of other examples China would appear to have plenty of reason to cut down on emissions, chief among them pressure from middle-class urbanites unsatisfied with the old “growth at all costs” for
mula of national prosperity. Quotes suggesting as much populate the pages of recent reports on the future of China’s carbon emissions, as when an unnamed top adviser to US Secretary of State John Kerry told Rolling Stone last year that top leaders “are very motivated on climate, due to air pollution issues.” But this conflates the more immediately poisonous particles in China’s airspace with CO2, which is harmless to humans even above the concentrations that will push the planet past the tipping point.

Online search statistics help illustrate this gap in concern. Baidu Index, which tracks the number of times a term has been queried using the mainland’s most popular search engine since January of 2011, can serve as a limited proxy for public interest among the net-savvy classes. Were air pollution and global warming bound together in the public consciousness, one might expect relevant terms’ trend lines to exhibit some sort of similarity by rising and falling together over time. That does not appear to be the case.

According to Baidu’s records, searches for “carbon dioxide” (green) have gradually increased over time, but the term has received nowhere near the attention paid to “air quality” (orange) or “haze/smog” (purple) during recent years as successive seasonal waves of pollution hit major mainland cities. While the latter two terms do show some degree of correlation, no such sympathy can be seen between either one of these and searches for “carbon dioxide” or “global warming” (blue).

The latest search trends bear the same conclusion out. Smog awareness recently got another shot in the arm when former CCTV television reporter Chai Jing published a self-produced documentary on China’s air pollution problem online over the weekend. The video, “Under the Dome”, had been played more than 14 million times on mainland video-sharing site Youku as of Sunday afternoon. But search data show no concomitant rise for climate change-related queries.

Public pressure for an end to China’s dependence on coal might waver if the haze were to disappear from its skylines. Policies already being implemented to deal with China’s logistical shortcomings in the coal sector may incidentally help do just that. •

Next in part 3 of 3: How energy transfer technology could keep coal king in China, and what might happen if it does