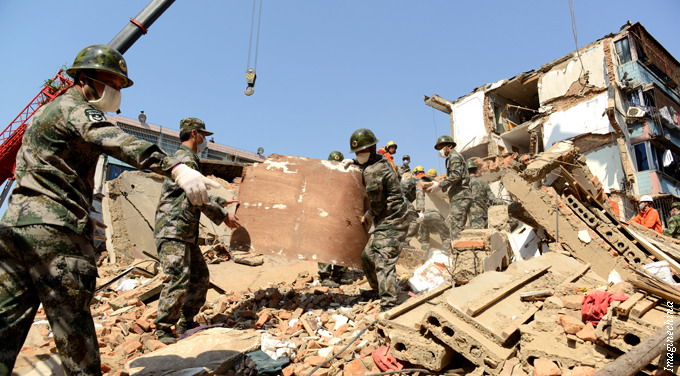 Be careful where you step – even when walking through your own living room. One person perished and six suffered severe injuries early this month when parts of their five-story apartment building in Fenghua county, Zhejiang province, collapsed into a pile of dust and rubble.

The building was deemed dangerous in December after a typhoon damaged it, officials warned at the time. Even so, the incident has reignited discussion on the quality and safety of Chinese buildings and what poor construction practices mean for the future of the country’s development. Building inspectors are reportedly vetting similar structures throughout the region, including some in Shanghai.

Many Chinese buildings aren’t constructed to stand the tests of time, not even for a short period. In 2010, housing officials shocked the country when they revealed that many residential properties had a lifespan of just 20 years. The average period of time that Chinese housing remains livable in is a meager 35 years compared to a century or more in many developed countries.

Many housing units in China have already hit the lower end of their shelf-life. The apartment block in Fenghua was built just 20 years ago. Large swathes of housing were rolled out across the country in the early 1990s as China transitioned from a government-assigned housing system in urban areas to a form of private ownership. Housing built during the planned-economy phase of China might be especially shoddy as the highly subsidized rents paid by tenants often failed to cover even the cost of construction, leading to poorer building quality.

The short lifespan doesn’t mean that living-room floors across the country will begin crumbling beneath residents’ feet. The term refers to the durability of housing without substantial renovation. Failure of power systems could be some of the early problems with flats. Before too long, many housing blocks across the country will look dilapidated; many already do.

Last year, China Economic Review reported on a controversial study that said poor building quality and China’s short-sighted land-lease system would lead developers in major urban areas to neglect reinvestment in city centers. The study, published by an international team of scholars, said the conditions would push investment to the outskirts of cities, leading to urban sprawl. More alarming, it could also cause city centers to decay into slums.

While the safety of buildings will stay in focus for years to come, some of China’s top development authorities have started questioning the philosophy behind the faulting construction, as well as some hidden consequences of bad practices that could disrupt the country’s growth.

To Qiao Runling, deputy director at China’s top planning body, the National Development and Reform Commission, the short lifespan doesn’t simply indicate how long the housing is livable in but how long developers wait to tear down one project in order to raise a more expensive one

“Chinese like to demolish buildings just so they can build new ones,” Qiao said, speaking at a real estate investment forum in Shanghai last week.

The buildings aren’t torn down because they’re dangerous but rather because local officials want to drive the economy with new construction projects. It’s “political willingness” that often cuts short the life of many otherwise healthy buildings, Qiao said, “The local government wants to stimulate GDP growth and they choose the crudest way to do this: Demolition then rebuilding.”

The practice isn’t just a waste of valuable real estate, it’s a major polluter and consumer of energy. The energy needed to fuel China’s construction industry accounts for about one-third of the country’s total energy consumption, Qiao said. Where energy consumption is high, so is pollution. The unceasing cycle of building and demolition adds to China’s already dire environmental conditions. On top of that, China has little capacity to reuse construction waste, unlike countries such as Japan. Some reports say that construction refuse has literally encircled cities like Hangzhou.

Political incentives might be waning for some of the wasteful construction, however. As part of the new government’s reform package, Beijing will try to reorder the incentives on which local government officials operate. Spending and building to boost GDP growth has been a key tactic employed by provincial cadres over the past decade. High GDP figures have often earned officials promotion regardless of the efficiency of their work.

Beijing will try to factor in sustainability and efficiency when appraising the work of tens of thousands of officials across the country while at the same time reducing the often-high expectations for growth pressed on regional governments.

That could be bad news for those who forged their careers on pulling down buildings just as fast as they could raise them.