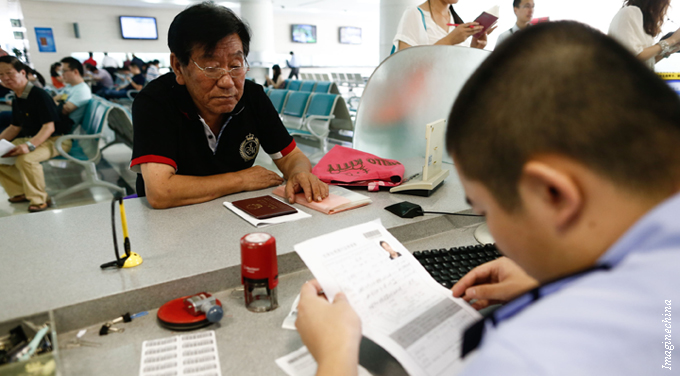 China’s immigration policy was never designed to handle a huge influx of foreigners looking to stay in the country over a long period of time.

Since the year 2000, the number of non-Chinese passing through airports, sea ports and land crossings has been increasing 10% annually, according to official data.The 2010 national census records almost600,000 foreign nationals residing in the mainland. This burgeoning foreign population is clearly visible in cities and towns across China.

A new visa law that was enacted on July 1 and new visa regulations that come into effect on September 1 are the first new border control policies since 1986, reflecting policymakers’ growing scrutiny of the increase in immigrants. They also hint at Beijing’s efforts to make regulating the movement of foreigners in the country more transparent.

“The new law is a welcome thing,” said Stacy Kwok, a partner at the Shanghai office of consultancy PricewaterhouseCoopers. “China is starting to look like other developed countries” in terms of trying to normalize immigration procedures.

China has long fostered a complex relationship with foreigners.

“Immigration is treated as a sensitive issue related to foreign affairs,” said Gary Chodorow, chief specialist in immigration law at Frederick H. Wong’s Beijing office. “Historically, the vast majority of the Chinese visa rules have not been published, and the government has not gone out of its way to make public these rules [either].”

This creates a headache for employers and employees alike. Companies inexperienced in recruiting non-Chinese are put off by the paperwork required to make their foreign hires legal and so take shortcuts. Employees agree to roles such as internships and part-time language teaching without fully understanding their legal status.

“Normally the school has copies of the foreign teachers’ credentialson display, to show the parents that we’re genuine,” Stephen, a part-time expat English teacher in Shanghai, told China Economic Review. “But when I came in two weeks ago, all those papers had been taken down… it turns out the police had visited the school earlier that day and the school had to hide everything.”

Stephen, who did not want to give his full name because of the sensitivity of the issue, avoided the interest of the authorities. Others are not always so lucky. The Dutch national spoke of a fellow language professional at a different institution who was recently deported for being in the country on the wrong visa.

Amid this uncertainty, the new visa regulations going into effect on September 1 do offer some much clearer guidelines.

Under the new system, the number of ordinary visa classifications has expanded from eight to 12 to allow for a more focused categorization of immigrants. Some are practical distinctions. For example, long-term and short-term stays will be recognized separately, as will foreigners engaging in commercial and non-commercial activities.

However, the changes also stand to impact legitimate foreign employment in China, adding to the already difficult process that companies must go through to hire foreign workers. Processing times for permits have been protracted to 15 working days from five.

In the case of Harry Spencer, a British restaurateur with operations in Shanghai, complications arising from going through paperwork resulted in his Scottish head chef’s arrival in China to be delayed by several weeks.

Crystal, a Chinese lawyer who works with foreign entrepreneurs in Shanghai, said it was becoming more difficult and more inconvenient for foreigners navigating the visa and residence permit application system. She asked for her family name not to be published.

“Illegal employment” – defined as working without authorization or beyond a permitted scope – has always been a notoriously ambiguous legal gray area. These new regulations should provide some more clarity for both workers and firms.

What is clear is that violations won’t go unpunished. Foreigners found to be working without the correct papers face fines of US$816-$3,265 (RMB5,000-20,000) or detention of five to 15 days in “serious” cases. Companies face losing income earned from “illegal employment” in addition to fines ranging from US$1,630 to US$16,300.

Whatever the hurdles legal grayness and bureaucratic opaqueness have created for foreigners, they have done little to stymie the influx of expats.

As long as Western economies continue to stagnate and China maintains its growth trajectory, many more will come. Nearly half of the foreign workers who move to China do so with the expectation that they will earn more, according to HSBC’s 2012 annual expat survey.

The Chinese government is keen to welcome experts with sought-after science and technology skills. So much so that a new “R” visa category has been created to lure talents that are “urgently needed.” Here, however, like with other parts of the new regulations, there is confusion as no specifics have been spelled out. What counts as “specialized talents” is anyone’s guess at the moment.

Given that China has only really been seen as a jobseekers’ destination for less than a decade, lawmakers here are still scrambling to come up with a comprehensive answer to this new challenge. For any government, handling foreigners is trickier than dealing with nationals – immigration law is a sensitive subject that affects diplomatic relations.

In spite of some missteps, these new visa regulations signal progress in Beijing.