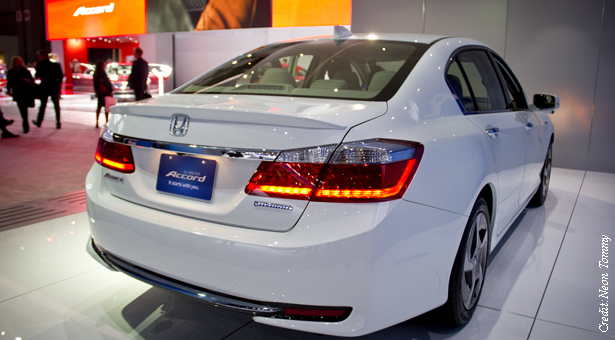 Japanese automakers have continued to misfire in the mainland market ever since tensions between China and Japan began to flare again over disputed islands in the East China Sea last year. The likes of Toyota (TM.NYSE, 7203.TYO, TOM.ETR) and Nissan Motor (7201.TYO, NISA.FRA) haven’t been able to return to previously fast sales growth in China ever since. The fallout continued in April, with Toyota announcing this week that its sales declined 6.5% year-on-year, Nissan recording tepid 2.7% growth and Mazda Motor (7261.TYO, MZA.FRA) posting a 15% drop. But with tensions having cooled in recent months, it seems unlikely that the poor sales can completely be attributed to Chinese who are turned off of the brands because of the island spat. Rather, the cars may actually be held back because their technology that is not keeping pace with German automakers, said one analyst, who asked not to be identified. For example, Japanese automakers aren’t putting out cars with turbo engines – those that are smaller, more fuel efficient but more powerful – that even Chinese car manufacturers are producing. With no signs of a turnaround on technology in sight and the possibility for more tensions with China on the horizon, Japanese automakers are unlikely to rebound in the mainland soon. Regardless of what’s holding them back, investors should remain wary.

Because money can’t buy you gold

If you don’t buy gold then buy the companies that sell gold. That seems to be them most recent signal from the market. Gold prices have come down 12% since January and this has led to a quick buy up of the metal recently at jewelry retailers in China. According to a CLSA analyst quoted in Bloomberg, the volume of sales is so high that it has been a “net positive for earnings.” Standard Chartered boosted its rating for Chow Tai Fook Jewelry Group (1929.HKG), the world’s largest listed jewelry company. But investors should remember that a decrease in gold prices means a drop in companies’ gross profit margins. One analyst from investment bank First Shanghai told China Economic Review that if the price of gold falls 10%, gross profit margins will fall up to 0.5%. “The volume [of sales] will be up for a moment, but it’s not a long-term story,” the analyst said, referring to companies such as Chow Tai Fook and the smaller retailer Chow Sang Sang Holdings International (0116.HKG). “It’s not going to be very good for stock prices.” Before investors value these companies at their weight in gold, they should consider how much longer the price of gold will fall. A long-term downturn in the market will not bode well for those holding shares of either of the companies.

Among Taiwan’s computer makers, a leader is emerging – and not even for the computers they make. Asustek Computer (ASUS; 2357.TPE) has shown a true capacity to cash in on tablets and other mobile computing devices. The company sold 3 million tablets in the first quarter of the year and brought in US$202 million in profits. The intake beat Barclays Research’s projection of 5.15% growth in operating profit margins by a few fractions of a percentage point. Tablet sales also reportedly offset the company’s falling computer sales, a trend that shows ASUS’s ability to adapt to the changing marketplace. On the other had, former Taiwan market leader Acer (2353.TPE) missed Barclays target, stumbling primarily on the inability to grab market share in tablets. A Barclays report said that operating margins “will not see any meaningful recovery due to weakening global PC demand and more low-price tablet PC shipments in the mix.” Investors should follow companies that are selling well into the tablet market. Now might be a good time to pick up shares in ASUS.

Hong Kong’s IPO market will face its truest test so far this year of whether investor sentiment for new shares has returned when China Galaxy Securities (6881.HKG) floats on May 22 followed by Sinopec Engineering Group the next day. Both have had strong response from cornerstone investors, but sentiment among investors who aren’t locked into their holdings will be the most important determinant of whether the shares rise upon listing. China Galaxy, whose growth relies on rising interest in investment products to grow revenue, may face a negative feedback loop (poor market performance contributes to lackluster revenues, which contributes to bad share prices, which contributes to bad markets…). Galaxy’s performance could in turn influence sentiment for Sinopec Engineering the following day. A clearer picture should emerge when both companies decide on their issue price in the days to come.