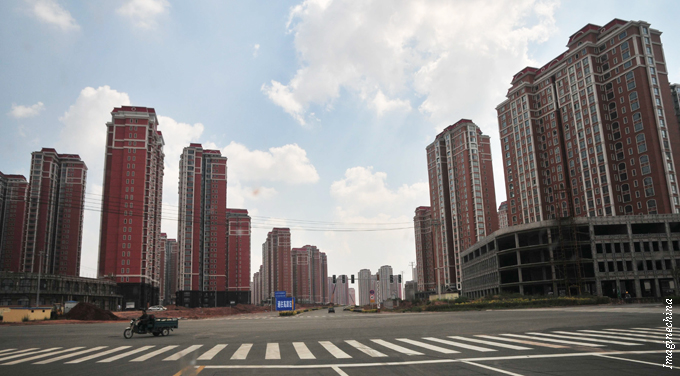 On the surface, things in China’s favorite ghost town, Ordos, seem to have gone from bad to worse. According to Chinese media reports, a few companies in the city are trading goods such as wool and grain oil for people’s real estate or cars. The government has extended loans to so-called “replacement” companies that use the credit to buy up commodities. They then trade those commodities for real estate or any other goods bought on credit. The hope is to bring liquidity back to the property sector.

For several years, the Inner Mongolian city’s Dongsheng district has been the poster child for urban planning and resource allocation gone wrong. News organizations the world over have sent reporters to walk among the endless rows of empty apartment blocks or stroll down the barren boulevards in search of signs of life or commerce – to find very little.

Ordos had one of China’s hottest real estate markets just three years ago. Developers built as if the masses were waiting on the edge of the Gobi desert, ready to pour into the empty flats and store fronts. Real estate speculators believed wholeheartedly that they would trade the cement and rebar for gold.

In 2010, property developers were building more than 10 million square feet of real estate, almost two-thirds of the floor space being developed in Beijing during the same year. Since then, investment into real estate has collapsed along with the city government’s income. The masses didn’t come to Ordos, and the speculators need out of their empty housing blocks. At this point, trading flats for flaxseed oil might sound like a bargain.

The replacement companies might be another quirk on Ordos’s long list of oddities. But the massive build-outs of real estate are not unique to the Mongolian steppe. Many cities across China are still adding amazing amounts of floor space, and with better planning, those places aren’t set to fall into the same ghost-town trap as Ordos.

Take Guiyang, the capital of Guizhou province, for example. Barclays Research recently visited the city and had some interesting notes on real estate developments in one the country’s poorest regions.

Between 2010 and 2016, the city will have 150 million square meters of property floor space under construction, according to the report. That’s enough space to house 3 million people in a city that only has a population of 4 million today. No more than a third of the people that will buy those houses currently live in Guiyang. Up to 60% of the flats will be filled by people from nearby counties.

Guizhou is one of China’s poorest provinces. Per capita GDP there was just US$3,000 in 2012 versus US$8,500 the same year in Guangdong province to the southeast. The demand generated by urbanization is a force that will literally remake the provincial capital as the population nearly doubles in a span of six years. Migrants will settle into modern homes, take up modern jobs and earn modern wages (by China’s standards).

Barclays wasn’t in Guiyang to verify the success of the city’s urbanization process. The team was there inspecting the industries that are set to profit from such massive real estate projects, such as the manufacturers of tires for big trucks. The city’s market may show some signs of a bubble, but with mainly poor migrants filling the new buildings, it also demonstrates effective urbanization planning, namely turning farmers into urban consumers.

The apartment blocks in Ordos won’t stay empty forever. People will eventually fill those flats – and likely pay far more reasonable prices for them than they would have three years ago. But for the process to work smoothly, the government can’t rely on the “build-it-and-they-will-come” model. Much more important will be to give the people a reason to relocate to the edge of the desert.

Ordos is trying that now – albeit not in time to save the speculators that originally rushed into the market. Fresh graduates who move to the city to set up businesses can receive free office space, utilities and internet connections. Instead of posh apartments, the city is building trade schools it hopes will usher in a new generation of entrepreneurs to the region.

Balanced planning should help Ordos officials run the ghosts out of town before the international media can post too many more stories and photo galleries depicting its lonely streets.