Home Banking & Finance Against the grain 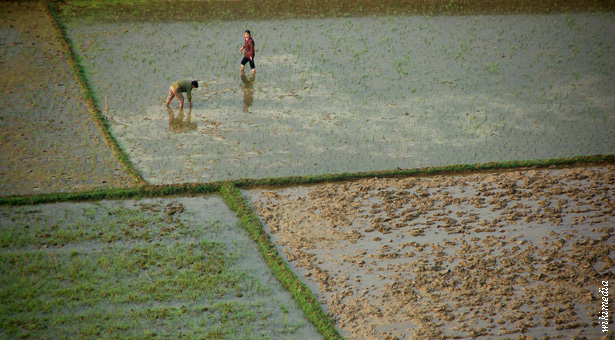 On the palm-studded plains of Cambodia, rice farmers’ eyes light up with the prospect of sending their crop northward to China. The poor Southeast Asian nation had been trying for several years to export rice to the mainland but only last year did it gain approval from Chinese regulators to start shipments.

Since then, the amount of rice Cambodia has shipped to China has skyrocketed. Although negligible in the international rice trade, the country exported more than 12,000 tons of rice to China in the first four months of the year, double the full-year total for 2012.

Cambodian farmers have capitalized on a trend that surprised – even alarmed – rice traders at the end of 2011. Chinese rice imports jumped about 230% that year, and in 2012 it became the world’s second-largest rice importer. Next year, the USDA predicts China will overtake Nigeria for the No. 1 spot.

The trend flies in the face of what traders thought they knew about the country’s rice market. A self-sufficient supply of the grain is integral to China’s agricultural policy going back to the Mao Zedong era. Declining rice consumption on the whole should in theory be pushing China in the opposite direction as an increasingly large middle class munches a wider range of foods, leaving rice to poorer rural dwellers who favor it for its cheap calories.

At the beginning of this year, when it became apparent that China had imported some 2.6 million tons of the grain in 2012, some reports questioned if the sharp increase would strain world supply and eventually send rice prices soaring.

But those reports are overblown. Although China is set to import a record 3 million tons in 2014, experts said the trend will not last. Rather, the jump reflects a new demand for higher quality rice, as well as trepidation over the safety of the domestic grain.

“For China, a couple of million [tons of rice] is quite a small amount,” Huang Jikun, director of the Center for Chinese Agricultural Policy at the Chinese Academy of Sciences in Beijing.

Overall, Chinese will eat less rice in the future. A slowdown in population growth coupled with urbanization will lead to a decline in rice consumption, Huang said. Population growth has dropped below 0.5% and the total population will begin declining around 2025.

As the number of mouths to feed decreases, Chinese are also moving from the villages to the cities, where they ultimately consume less rice. Urban Chinese, who are presumably richer, will diversify their diets, consuming more meat and fish than those they left in the countryside.

Rural Chinese consume about twice as much rice as urban Chinese, according to Huang.

However, the effects of urbanization and increased disposable income have had some unpredicted – though characteristic – side effects.

City dwellers are buying higher-quality goods, which has boosted the demand for better rice.

“You have more and more exotic cuisine from Asia – Thai food or Korean food or Japanese food,” Jean-Yves Chow, senior industry analyst at Dutch financial services firm Rabobank, said from Hong Kong this week. “This is requiring different kinds of rice. And this is a driver for why you see some imports of rice coming from those countries.”

China’s ability to produce higher-quality rice is low at present, Huang noted. Much of the increased demand for imported rice was coming from hotels and restaurants, he said.

The safety of the grain can be just as important as the taste. Earlier this month, demand for imported rice reportedly soared in the southern city of Guangzhou after local officials pointed out that half of the local rice supply was contaminated with the heavy metal cadmium.

Although a wider survey conducted by the Guangdong provincial government showed that far less than half of rice on sale in markets contained the carcinogenic agent, Cantonese still scrambled to buy imports and grain grown in China’s northeast.

That is just one of several food safety scandals to hit China this year. But, for millers in countries that are trying to boost exports, such as Cambodia, the demand for safer rice is encouraging.

“Lots of people are worried about the cadmium content of the rice,” David Van, deputy secretary general for the Alliance of Rice Producers & Exporters of Cambodia, said this week from Phnom Penh, the capital of the country. “But with the issue of domestic rice they have right now, a lot of exporting countries are licking their lips and increasing their quota for rice imports into China.”

Exporters in Southeast Asia and in countries such as Pakistan should continue to reap profits off of a richer, more health-conscious class of Chinese urbanites for at least a few more years – or until China can produce higher-quality grain itself.

While most experts agreed that large Chinese imports of rice would not continue long term, a host of factors make the outlook far from concrete.

World rice prices took an unexpected dive in late 2011, when countries such as India and Pakistan flooded the market with grain reserves. The Chinese government sets rice prices and those rates have remained fairly constant as the global price waxes and wanes, Huang at the Chinese Academy of Science said.

Lower prices on the international market have helped boost imports to China, but there’s no indication that low global prices will persist, and Chinese importers will buy less if prices rise.

As stable as China holds its rice price, the country’s policies toward a host of other sectors is unpredictable and can influence how the country grows grain, Subash Dasgupta, a senior field food crop specialist at the United Nations’ Food and Agriculture Organization, said from Bangkok.

For example, the central government’s policy on renewable energy will influence how much rice is produced in the future, he said. If China boosts biofuel crops such as cassava or maize, there will be less land on which to grow rice.

Urbanization is also cutting back on arable land. Chinese may eat less rice after they move to the city, but they are also taking up space that was once used to farm. Dasgupta said he recently visited an area in China that just 15 years ago was a major producer of rice. Today, urbanization has curbed that production significantly.

China’s self-sufficiency in terms of being able to grow enough rice, according to experts who spoke with China Economic Review, is nevertheless uncontested. However, food safety scares also have the potential to change the future of China’s imports.

Officials traced the source of Guangzhou’s cadmium-laced rice to three mills in Hunan province, where production
has since been shuttered. But a century of unbridled industrialization has contaminated as much as 70% of the country’s top soil, according to some reports.

Whether or not contamination of grain will become a larger issue for China has yet to be seen. If more heavy metals appear in the country’s rice bowls, it will draw into question both self-sufficiency and the short-term nature of China’s recent rice-buying spree.