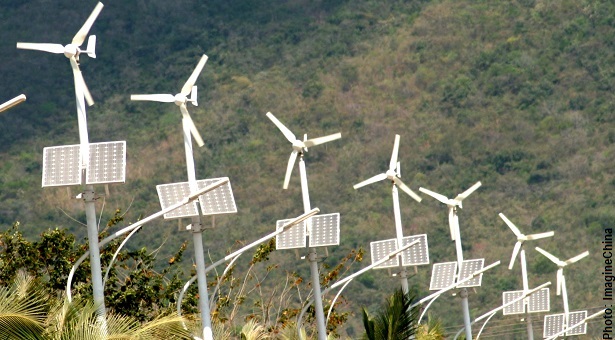 Renewable energy statistics, viewed in isolation, sketch a misleading picture of wind and solar energy growth in China. According to the Energy Information Agency, China’s total installed wind and solar electricity capacity was 7% in 2013—a seemingly insignificant amount when compared to the large market share owned by coal and hydropower. But due to China’s physical size, massive population, and rising energy needs, this figure actually represents an enormous amount of wind and solar potential.

These impressive numbers reflect Beijing’s sustained commitment to confronting the country’s most serious environmental issues such as deteriorating air, soil and water quality. Adopting new renewable energy will ease some of the strain already being placed on these vital resources, prompting Beijing to aggressively pursue new wind and solar plans as part of its “war on pollution.”

Solar and wind weren’t always at the center of China’s renewable push. With more installed hydropower capacity than Brazil, the United States, and Canada combined, China is the undisputed leader in hydroelectricity generation. The Three Gorges Dam stands as a monolithic testament to Chinese engineering and Beijing is continuing to invest in new projects as it capitalizes on the country’s water resources.

But while hydropower provides almost 20% of China’s electricity, the various environmental, social, and geopolitical costs of damming and diverting rivers has prompted leaders to pursue alternative renewable energy sources. Conversely, wind turbines and solar panels consume very little water, and recent headlines have drawn attention to the rapid installation of solar capacity as well as the strength of Chinese wind turbine manufacturers in the world market. These stories underscore how essential wind and solar technology has been to boosting total installed renewable capacity from only 0.5% of overall capacity in 2007 to over 2% by 2013.

The catalyst for the rapid rise of wind and solar energy technology within China was a series of landmark renewable energy laws passed by the central government. The first, The Renewable Energy Law, passed in 2005 and implemented in 2006, was a clear mandate from the central government to encourage renewable energy projects throughout China. The law set renewable energy targets, mandatory connection quotas, a feed-in tariff system, and a cost-sharing mechanism. In addition, Notice 1204 required 70% of wind turbines to be manufactured in China in order for installations to receive government support. These amendments incentivized solar and wind development and helped offset the cost of incorporating renewable energy into existing grid networks.

“Extremely ambitious renewable energy targets, endorsed by the State Council in 2007, ramped up the world’s greatest wind farm construction boom,” said Lee Branstetter, nonresident senior fellow at the Peterson Institute for International Economics. “The financing behind the farms was more than a bit opaque, but local government leaders had strong incentives to support this boom with borrowed money and land lent at low cost to wind projects. Rapid construction of large wind farms contributed to regional GDP and supported a key central government initiative.”

With the central government prioritizing renewable energy and local governments eager to meet their quotas, wind farm projects flourished throughout China. Fledgling Chinese companies began to enter a rapidly expanding wind turbine market as favorable domestic laws allowed them to compete with global wind giants such as Vestas, Gamesa, and GE. But the swift growth of domestic wind turbine firms began to create problems as the 2008 global financial crisis hit and forced central and local governments to focus their attention on economic stabilization. This crisis exacerbated problems related to overcapacity and curtailment – energy produced by wind or solar sources that is not used by the electricity grid – hurting domestic wind energy producers and forcing mergers and bankruptcies.

Chinese solar panel companies have experienced many of the same breakthroughs and difficulties as their wind turbine equivalents, but found success in exporting technology rather than producing for the domestic market. Solar technology companies’ export-led strategy worked initially, and China became the world’s largest solar cell manufacturer in 2007 and the largest solar panel producer in 2008.

The rapid expansion of China’s solar power industry was primarily driven by European demand for cheap solar panels that emerged after European Union member states ratified the Kyoto Protocol, which called for signatories to adopt policies that would cut carbon emissions. European governments provided local energy companies with feed-in tariffs that helped subsidize the price of electricity generated with solar power. As the European market grew, Chinese producers, who were being subsidized by the central government, began exporting at a swift pace—a pace not matched by demand in Europe or elsewhere.

“Chinese producers continued to ramp up manufacturing capacity even as European nations, constrained by their fiscal crises, cut back on subsidies that created the huge European solar market into which Chinese producers had hoped to sell,” Branstetter said. “Rather than let their industry get crushed between expanding domestic supply and collapsing foreign demand, the Chinese government created generous incentives for solar power deployment at home, which swiftly made China the top global market in terms of new solar PV deployment.” This rapidly expanding growth and tremendous oversupply of solar panels was what caused the EU to begin investigating China for violating international dumping laws in 2012—a probe it reopened in late Ma
y
.

Strong domestic demand has helped to offset dropping foreign demand and also allowed China to move closer towards its own renewable energy goals. According to the International Renewable Energy Agency, China installed more renewable energy capacity in 2013 than all of Europe and the rest of the Asia-Pacific region combined. More recent figures released by China’s National Energy Administration reveal that China installed over 5 GW of solar energy in the first quarter of 2015 and is set to have the largest installed capacity in the world by the end of this year.

On again, off again

Building and installing the turbines and panels to collect wind and solar energy is the first step in developing those industries, but the electricity grid can’t always accept all of the available energy. With transmission rates lagging behind raw wind and solar capacity, the central government is pushing both technological and economic reform to ensure that the wealth of renewable energy is actually transformed into useful electricity and heat for houses and businesses.

Improving curtailment rates is one of Beijing’s top priorities. China’s nationwide curtailment rate between January and June of 2014 was 8.4%, and dropped to 7.5% by the end of September. That signifies progress, but still trails the negligible curtailment rates enjoyed by U.S. wind farms. Despite these continued problems with energy delivery, China passed the United States in terms of total installed capacity in 2010 and had over 31% of the world’s total wind power capacity in 2014.

Anders Hove, Associate Director for China Research at the Paulson Institute, said curtailment problems are caused by a number of factors including “transmission bottlenecks, the rapid pace of build-out of wind and solar in regions that already have more capacity than the local area can handle, lack of a wholesale power market or economic dispatch order that would prioritize renewable energy and lack of incentives to dispatch renewable energy over coal-fired generation.”

In addition to curtailment, the relatively expensive price of renewable energy when compared with traditional fossil fuels is preventing broader adoption. The reality of low-priced coal and cheap liquefied-natural gas imports is making it expensive for residential and industrial users to make the switch to solar and wind power.

Branstetter at the Peterson Institute emphasized that there is no “magic bullet” to solve curtailment problems. On the technological side, Beijing is investing in ultra-high voltage (UHV) transmission lines that will allow China to transport electricity from distant northern and western provinces to energy-intensive, high-density coastal regions that collectively consume around 40% of all of China’s available energy. Additionally, expanding the smart grid, an electricity grid that incorporates digital technology to detect and react to local changes in usage, will also enable grid operators to more easily deal with peak energy periods and better distribute energy when needed.

Technological issues aside, economic restructuring will likely be the primary driver of industrial and residential behavior. On this front, Beijing has continued to aggressively push forward a number of vital economic changes that will encourage wind and solar use. In April, the State Council, National Energy Administration, and the National Development and Reform Commission, the chief governmental bodies responsible for energy use in China, released four documents that proposed significant energy sector reforms. Of these, the State Council’s Document No. 9 contains a number of key policy reforms that directly address these economic barriers.

“The new policy will transform the way China’s electricity grid companies operate as well as transition towards a revenue-cap regulatory regime for grid companies,” Hove said. “Additionally, Document No. 9 addresses demand-side management and emphasizes the development of new mechanisms for distributed generation.” Demand-side management reform will help alleviate problems associated with peak energy use and encourage energy efficiency among end-users. Improving distributed energy generation has long been part of the central government’s renewable energy goals, but it has fallen short of expectations.

Beijing is pursuing diverse economic and technological solutions to facilitate the incorporation of solar and wind energy into electricity grids throughout the country. Implementing these solutions will take time, and the central government will have to maintain pressure in order to encourage swift and widespread compliance. While success isn’t guaranteed, what is certain is that the central government is pulling all of the policy and economic levers within reach as it strives to meet its energy goals. ♦