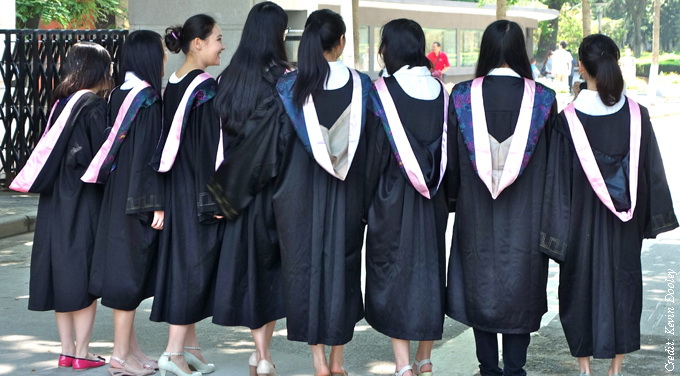 Education is the bedrock for a country’s growth. China has been investing big in its leading schools. Although it still lacks institutions that are able to compete at the very top globally, China comfortably dominates its emerging market peer group. Chinese universities were the standout performers of the inaugural ranking of tertiary institutions in developing economies published by Times Higher Education magazine.

Phil Baty, editor of Times Higher Education rankings, explains how Chinese universities have come this far, what it will take for them to break through into the leading pack and how they are struggling to overcome a block in creativity.

What were the notable attributes of the top Chinese universities in the ranking and why did Tsinghua and Peking come top?

You have to really perform well against all of our criteria. We have 13 separate performance indicators and they cover right across from teaching and research to knowledge transfer, to international outlook. But the one area where both Peking and Tsinghua were absolutely outstanding with the highest scores possible was for industry income, a sort of innovation indicator and third mission activities where universities are able to engage with businesses and companies and attract funding for their research through industries. That’s an incredible area of strength in China.

They have a very sound research performance compared to other universities; they do pretty well on research impact where we look at how many times their research publications are cited by other scholars around the world. The two Chinese universities come out well on teaching. They are obviously very well regarded around the world as strong teaching institutions. We find that the Chinese universities are particularly well regarded in teaching and a good teacher-to-student ratio, healthy proportion of PhD to undergraduate number, and also scored well in the reputation area. So, outstanding in the knowledge transfer and industrial innovation category, but also very, very strong on teaching as well.

Can you explain a bit more about how government support and funding has helped China to build up its universities this way?

I think China is the outstanding example of a clear policy direction with a very strong recognition in the 1990s that China needed to develop to move from manufacturing to an innovation and knowledge economy. So they undertook a very strong series of moves and I think the key ones were the two in the 90s, but in particular the 985 project. [Editor’s note: Founded in 1998, Project 985 is a state-directed program aimed at building a select number of Chinese universities into world-class institutions.]

Now, obviously hard cash investment is essential here. You do need money to pay the scholarships, to pay the high salaries, to attract the talent in, to build the research infrastructure and fund the research activities so there is a very clear sense of China’s commitment of funding.a

But also reforms to improve and increase internationalization and the encouragement of international exchange programs, in particular some of the scholarship schemes which really encouraged Chinese scholars to come back to China to continue their higher study and start or continue their professional careers back in China.

You say this new table highlights how many more Chinese universities are potentially poised to join Peking and Tsinghua in the Global Top 50 but the others are, at best, only ranked in the top 200-225 worldwide at the moment. Why is there such a big gap with the best in the world?

A: I think they’re less visible in the world rankings – Fudan is just outside the top 200; there’s a few like Renmin who are 226-250. So yes, you’re right, they’re all there or thereabouts, just outside the global 200. But I think what this shows really that there is a large group of universities that are pretty close to that magical 200. The top 200 is roughly about 1% of world’s higher educational institutions. What I am really trying to say is that given the trajectory of China; given that there’s continued economic growth; given that there’s continued commitment to investment in universities; given it’s not just Peking and Tsinghua who are getting special funding and special support from the government, it would appear that the others are in a position to continue to improve, to continue to march up these tables.

What can they do to close the gap?

I think there’s quite clearly a sense that there are some remaining barriers. Money is absolutely fundamental. But I think there are challenges around continued reform and persistence – reforms to be more adaptable to the global market and trying to give maybe a bit more autonomy, a little bit more freedom to be more dynamic, more entrepreneurial in the face of the changing global market.

I think there are still challenges around – Peking, there’s a concern, perhaps, that there’s a lack of creativity; the entrance exams are so rigorous in checking fact that maybe they are not encouraging students to do more free thinking, more creative in terms of answering questions that haven’t been asked yet and preparing for an uncertain future job market, so there are those sorts of issues.

And of course there is a slight pressure on just churning out research publications as part of the workplace incentives and maybe there needs to be a focus more on producing higher-quality research. There’s been an absolute explosion in the volume of research produced by China, which is very exciting but maybe the next step is to make sure that research is more carefully focused to make a real high impact with slightly less mediocre research and more focused on producing real quality.

Research is highly regarded at Chinese universities, which shows in the analysis of the rankings, but what about the humanities and creativity?

There are some encouraging signs that we have seen, particularly Peking and Tsinghua, they have been interested in more exchange with American universities, they have been interested in looking at the liberal arts type education that’s the sort of specialty of America. I think there’s an acknowledgement at the top in China that there does need to be this new push, this new reform. Entrance examinations are problematic because they do encourage a machine-like approach to learning and that’s very successful in terms of producing extremely solid mathematicians and engineers, which of course people really need, they have vital skills. But there is a challenge, I think, in terms of being flexible for a very uncertain future in terms of creating new knowledge and moving into new industries and solving problems that we don’t know yet, and I think that does require the freethinking and creativity that is lacking in China a little bit at the moment.

The enthusiasm for international exchange in China is very encouraging so there have been programs to encourage Chinese students to study abroad. There has been quite a significant push to get overseas students to come and study within China to join the classrooms. I think slowly but surely there is going to be a culture shift where there is a bit more creativity in the classroom and teaching practices that you find in the Harvards, Yales and Princetons may start to play a stronger role within Chinese universities, and that is important.