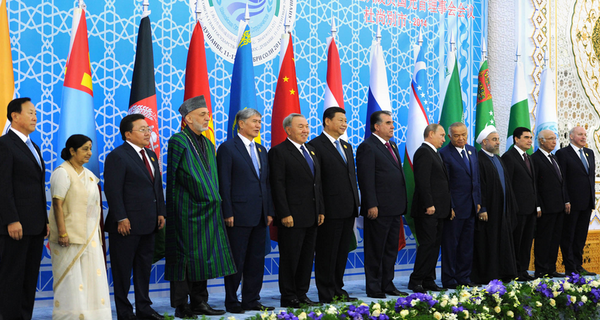 The 18th meeting of the Shanghai Cooperation Organisation will begin on June 9 in the coastal Chinese city of Qingdao, welcoming leaders of the group’s eight member states to discuss regional issues of energy, trade, security and cultural exchange at a time when China’s ties with the West are being tested.

The previous six official member states (China, Russia, Kyrgyzstan, Tajikistan, Kazakhstan and Uzbekistan) will be joined for the first time by India and Pakistan, which were inducted into the organisation at last year’s summit in Astana. Heads of state from six further “dialogue partners” (Armenia, Azerbaijan, Cambodia, Nepal, Sri Lanka and Turkey) will also attend.

Amid the festivities of fireworks displays and banquets, officials will participate in a mixture of seminars and conferences. For Russia’s Vladimir Putin, as well as the presidents of Kazakhstan and Kyrgyzstan, the event will also be classed as a state visit.

As the largest economic power on the membership panel, Beijing’s voice is expected to drive discussions, with President Xi’s signature Belt and Road Initiative, which implicates the majority of nations involved at the summit, taking centre stage.

The central Asian nations of Kazakhstan, Uzbekistan, and Kyrgyzstan hold particular importance to China for this reason, running along several of the intended trade routes from China to Europe. Kazakhstan, for instance, is currently involved with over 50 large-scale bilateral projects with Chinese companies totalling some $27 billion, according to the country’s minister for investment and development. Much of this capital is going towards extraction of energy, minerals and machine building plants throughout Kazakhstan’s sparsely-populated rural areas.

In mid-May, China made further inroads into the often-isolated central Asian economic community by becoming a signatory of an agreement on trade cooperation with the Eurasian Economic Union, of which Russia is also a party.

The focus of the world’s attention at the summit, however, will be on relations between Moscow and Beijing. As with the other attending states, Russia has increasingly become a recipient of Chinese finance. Moscow appears happy to capitalise on its natural resources and geographical importance to gain access to Beijing’s capital, which offers welcome relief to a country suffocated by strict Western sanctions.

China is now Russia’s top foreign trade partner accounting for 15% of Russia’s current account balance sheet. Trade between the two countries reached $87 billion in 2017, and this figure is set to grow further with projects such as the “Power of Siberia” natural gas pipeline due for completion in 2019. China has also won a $375 million deal to build a high-speed rail route from Moscow to Kazan, with possible further extensions on to Beijing to form a key “Belt and Road” pathway.

The centrality of the Belt and Road Initiative in China’s favourable view towards Russia is no secret to either side. The Chinese ambassador to Russia, Li Hui, told Russian news that the two regional powers can look forward to stronger trade prospects in agriculture, investment and finance, “relying on the cooperation of ‘Belt and Road’ with the Eurasian Economic Union.” Moscow itself has labelled its economic relationship with China as a foreign policy priority.

On Tuesday, Xinhua quoted one source as describing the Russia-China energy partnership as “a model to expand to other SCO members,” going on to suggest that India would stand to gain in light of a recent pinch in global oil prices. Energy is expected to be included in the “Declaration of Qingdao” that all attending nations will sign this weekend, potentially extending China’s convenient economic arrangement with some member states to all.