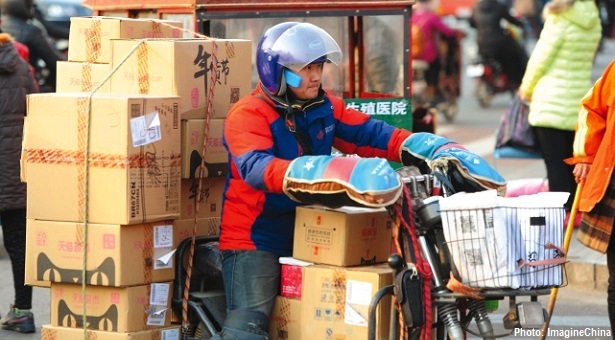 Much has been made of the Chinese economy’s shift from manufacturing to services-driven growth—a conceit so common in newsprint it now borders on banal.

To look at the headline figures, at least, the transition is on track: Services have been the largest contributor to China’s GDP since passing manufacturing in 2013, and have kept growing as the latter’s prospects continue to darken.

But the concerns expressed over China’s recent quarterly GDP figures show that respectable progress viewed from the top-down can mask obvious trouble below. In particular, few expected China’s manufacturing sector to shrink as fast as it did in 2015, raising doubts about whether services can pick up the increase in slack expected in the months and years ahead.

Recent figures from the independent Caixin/Markit services gauge have shown growth slowing, but even with strong gains for the sector it would remain far from clear whether the current economic sea change will prove a boon for Chinese workers in the long term. Right now it probably isn’t.

“The general trend is definitely away from long term, stable employment towards very tenuous, short-term employment,” said Geoffrey Crothall, communications director for China Labour Bulletin. From all accounts, such employment seems unlikely to be kind to the workers currently coming off the factory line.

As factories shed more employees, those who find work in services are being forced to accept lower wages thanks to their fellow workers also making the exodus out of manufacturing.

Broadly speaking, migrant workers – who make up roughly a third of the total workforce by official metrics – saw the biggest employment gains from 2010 to 2014 in the construction sector, an absolute increase of 30 million workers, according to annual surveys of migrant worker conditions published by China’s National Bureau of Statistics. That likely reflects growth in government spending on infrastructure and real estate development following the 2008 global financial crisis.

The only other sector to see steady, major gains over the period was in services: Wholesale and retail gained about 10 million workers. That doesn’t necessarily mean that services aren’t actually growing, just that they may not be for migrants—or that some services work isn’t being captured by the surveys. It’s also possible that high-end services work is being occupied mostly by locals.

“I think that the growth areas in services industries for former factory workers are not particularly well paid jobs, nor particularly secure,” Crothall said. While fine-grained detail on employment can be difficult to come by in China, he pointed to its burgeoning service-sector industries, such as delivery of e-commerce purchases, as employers of increasing importance.

Between construction and manufacturing, however, the secondary sector had grown to account for more than half of migrant worker employment as of 2014, at the apparent expense of tertiary industry. Secondary sector growth also held true that year across China’s three largest regional groupings—East, Central and West.

How that stacks up for China’s combined local-migrant workforce is less clear, but Crothall noted that those who do find their way into services often find themselves worse off. He cited the job insecurity, month-to-month contracts, employer disappearances and more that are common to warehouse and delivery work in China’s growing logistics industry as prime examples.

The result is an employment environment that increasingly looks like the kind embraced and evangelized by Silicon Valley entrepreneurs: Work for us as long as you’re needed, find it elsewhere if you’re not.

Even so, there is little doubt that a growing number of services jobs are helping deal with manufacturing’s rapid fall, said Ines Lam, China Economics Research Associate at brokerage and investment group CLSA. “Many jobs in services are unskilled and low paid, for example courier work,” Lam said, “but they are still jobs, and help to absorb excess labor.”

That damage control is likely welcomed by policymakers, but the wage growth in manufacturing that was the subject of much attention last year may not necessarily reflect the kind of movement up the value chain they have in mind for the sector.

Professor Kam Wing Chan, who studies migration, labor markets and economic geography at the University of Washington’s geography department, said a key upward driver of wages in China’s manufacturing heartland, the Pearl River Delta, was high turnover rates. Factories have been forced to compensate for a lack of job security as work becomes increasingly contingent on whether a firm can secure the necessary orders.

While economists generally acknowledge that services have a greater capacity for job creation than manufacturing, the workers being turned out from China’s factories are increasingly older migrants who have in some cases been at a single firm for over a decade. The share of migrant workers in China over 30 grew to more than two-thirds in 2014, according to NBS statistics; those over 40 account for more than 40% of the migrant workforce.

Expansion of the migrant workforce has also slowed considerably since 2011, when annual growth was 4.4%. Last year the growth rate fell to just 1.9% as the total number of migrant workers nationwide reached nearly 274 million.

With demographics on their side, many workers still in manufacturing are in a better position to strike back when employers endanger benefits of key concern to them, like social security. In 2015, major protests over relevant social security plans on the mainland recorded by China Labor Bulletin’s strike map rose to a record total of 61, more than triple that of 2012.

Though recent college graduates and other younger workers may be more willing to do services work and more sought-after by services firms, Crothall said recruiters didn’t think much of the sector’s young blood, and added that such gigs offered little opportunity for promotion or career advancement.

Rather than a step forward, the shift to services could represent for many workers a step sideways into a different, but equally fraught, form of employment. And on top a potential shift toward atomized services work that actually empowers employers more, China’s workers also still lack the ability to form real unions, and must deal constantly with a discriminatory social services system that penalizes them for seeking out better-paying work where it is most easily found.

It doesn’t have to be that
way, according to Chan. Reforms to China’s oft-criticized household registration scheme – known as the hukou system – could help transform migrant workers into a fresh cohort of top-notch consumers, provided local governments can be made to open their gates.

The current system’s costs for migrant workers are legion: It ties social benefits to one’s official registered hometown, meaning most migrants lack basic access to even basic government services. Injury on the job, for example, can mean bankruptcy from medical expenses at local hospitals or lifelong impairment for those that forego treatment, since taking advantage of public healthcare could mean traveling thousands of miles back to one’s registered residence.

Chan said these concerns and others depressed migrant workers’ consumption habits, preventing them from settling down in China’s major cities and forestalling major household purchases that could also serve to boost municipal coffers through increasing tax revenue.

“Faster reforms can help migrants settle, and I think with that longer-term horizon, you get longer-term investment and raise family purchases of durable goods,” Chan said. “It’s the typical transition from self-sufficient rural existence to urban life, and it can gradually create a big jump in consumption.”

Services work also comes more easily in big cities, with low-end jobs (e.g., cleaning) needed to meet the needs of those doing higher-end work (say, tech development). But local governments tend to ignore such complimentary developments, instead viewing the prospect of granting migrants equal rights only in terms of its potential costs.

Recent reforms have done little to alter the status quo. But changes to the hukou system that really do end its worst excesses could give China’s economy a significant shot in the arm by also helping address large labor surpluses in places like the country’s northeast, where a collapse of state-subsidized heavy industry is still ongoing.

“Labor migration would be a great way to absorb excess labor in some provinces,” Lam said, pointing again to the employment capacity of the services sector.

Whether local governments in China can be brought on board is another matter—though Lam said they may soon have little choice, with services growth likely to lag in upcoming quarters without the kind of contribution made by the finance sector during the 2015 stock rally. She added she wouldn’t be surprised to see major overhauls to the hukou system within the next few years.

The question is whether implementation of such reforms will come fast enough. In light of the pace to date, the outlook is far from certain. But if China’s current downturn proves enough to force a more vigorous round of reforms that truly help empower migrant workers and end systemic discrimination, it may prove to have been well worth the trouble. ♦