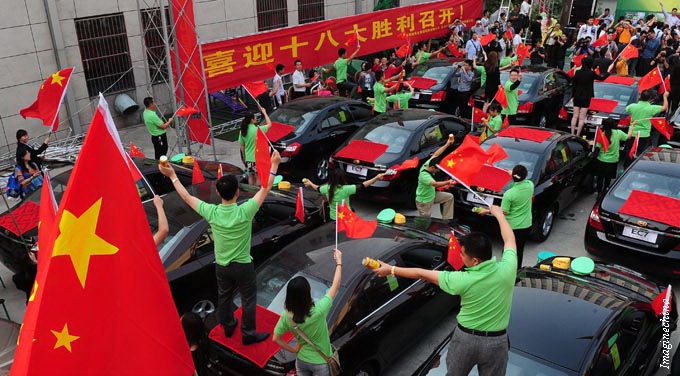 As bad as things have gotten in the East China Sea, Japanese diplomats in China may have preferred their posts to those of senior executives at the country’s three biggest automakers, Honda, Toyota and Nissan.

Profits from the mainland have dropped sharply for the automakers since last September, when Tokyo said it nationalized a tiny archipelago known as the Diaoyu islands in China and the Senkakus in Japan.

One can imagine a punch-up between Japanese statesman and businessmen at a bar in Beijing.

There is no sign of improvement on the diplomatic front. In fact, China has firmed its stance, signaling this week that it is no mood for talks. However, almost counter intuitively, the car builders are set to make a comeback this year. That’s because, as much as managers hate to admit it, the crisis on the sea was never the main factor driving down sales of Japanese autos.

Angry Chinese citizens overturning Hondas, or in one incident severely beating the driver of a Toyota, in “protest” over the islands surely led to fewer sales this year. But industry watchers say poor management and a lack of foresight at the firms were more to blame for the longer-term downturn. The territorial dispute has merely shattered the industry’s windshield.

“Japanese manufacturers misjudged the market,” Ivo Naumann, managing director at AlixPartners said at the release of the report. Four years ago Japanese companies projected the China market would grow less than 5% and invested accordingly. The market grew at nearly 9% in 2009 and expanded more than 13% year-on-year last year. “They simply were not able to meet demand and capture that market share.”

Brands were also late getting new models to the market. For example, Honda was slow in introducing the CR-V, a model of sports utility vehicle. It’s now a best seller in China but it missed out on the surge in SUV demand of recent years.

Japanese car companies should see stronger sales in the second half of the year – with no help from the country’s statesmen. However, analysts are mixed on the strength of the bounceback.

“Although they’ll make some recovery, compared to German and US carmakers, [Japan’s] recovery will be very slow,” said Ryan Cui, an analyst at consultancy LMC Automotive in Shanghai. The uptick in year-on-year growth will be from a very low base.

Some of the growth will come as the latest versions of car models find their way into showrooms, Cui noted. Late last year, Toyota released a new version of its Camary model. A new generation of Acura, Honda’s luxury line, will hit the roads in China later this year.

Among the Japanese brands, an aggressive marketing campaign has pushed Nissan to the lead in the China market, according to data provided by AlixPartners. In 2005, the company represented just 6% of their combined market share. That grew to 37% by last year, the biggest of the three.

The company is also designing cars specifically for the mainland. Nissan’s partnership with domestic firm Dongfeng Motors has successfully targeted Chinese consumers with the Venucia model that includes a hatchback and a sedan.

For their part, Japanese auto parts suppliers have taken steps to avoid getting caught off guard by another surge in Chinese demand. By 2011, suppliers to the car builders had close to 500 factories on the mainland, more than any other region in Asia. They also earmarked more than US$1 billion in investments for expanding capacity.

Sales growth might be tough and the environment challenging. But at least Japanese carmakers aren’t waiting on stubborn leaders to compromise on the rocks in the East China Sea.