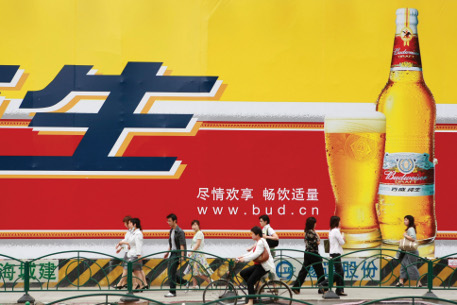 Holding menus inches from their faces, two Chinese women attempted to decipher them for several minutes before being rescued by a waiter. What do you like, he asked, light, dark, bitter, fruity? Then a server brought over the dark red bottles, popped the tops and slowly poured two glasses.

Such a scene could have easily occurred in any number of wine bars that have sprung up across China. But it wasn’t wine the women were drinking – it was beer.

Premium beer appears poised to take off in China like wine did in the last decade, with analysts projecting the market to grow 5-15% annually for the next five to 10 years. Compared to sky-high prices for the most sought-after wines, premium beer is an affordable luxury even at its most expensive for middle-class Chinese hoping to exercise their new spending power. Benelux beer companies – those in Belgium and the Netherlands at least, as Luxembourg produces relatively little beer – have positioned themselves as likely candidates to ride that projected growth.

China is the world’s largest beer market; last year, the country consumed 450 million hectoliters of the stuff. But roughly 95% of that was mainstream beer: almost universally weak, yellow, bland and cheap. Mainstream beer, a category that includes domestic brands like Tsingtao and Snow, still holds potential for long-term profits once the scattered market begins to consolidate. But for near-term profit growth, Benelux beer companies that are targeting China’s premium market – namely Anheuser-Busch InBev, Heineken and Duvel – are in a much better position.

“You’ve got overproduction [of mainstream beer] in China already for decades, for about 30% of actual consumption, meaning that prices are very low and the excise tax situation makes it hard for brewers to get a margin out of regular beer,” said Kris Kippers, a beverages analyst with Belgian bank Petercam. “So it’s only the import segment that is doing quite well: for example, Budweiser or Heineken and even specialty beers like those of Duvel.”

Beer for the masses

The average Chinese adult drinks 32.1 liters of beer a year, still a relatively modest amount compared with the beer-guzzling west. The market is dominated by “mainstream beer,” which sells for around RMB3-4 (US$0.47-$0.63) for a large bottle in convenience stores nationwide. These beers have flooded the market for decades, keeping prices low and profit margins almost non-existent after excise tax. But that’s not to say that investing in the market is unmerited. China is universally expected to be a growth market; it’s just a matter of time until demand catches up with production, although analysts say that could take years or decades.

Jean-Marc Chow, an analyst with Sanford C. Bernstein, said he expects per capita beer consumption to eventually double and come more in line with Russia and Japan – countries that have strong traditions of drinking hard liquor (vodka and sake, respectively) that may equate to China’s baijiu drinking culture. That would put China somewhere between Japan’s 50 liters per person and Russia’s 70 liters per person, but still short of the roughly 80 liters per capita in the UK and US, where beer drinking dominates.

The foreign brewer that has best capitalized on this growing demand is Belgium-based Anheuser-Busch InBev, which vaulted to a position as China’s third-largest brewer after entering the country relatively late in 2003. (China Resources Snow Breweries and Tsingtao Brewery are the largest and second-largest brewers, respectively.) AB InBev’s success in grabbing market share stemmed from its purchase of the St Louis-based Anheuser-Busch, which took over Harbin Brewery, China’s fifth-largest brewery, in 2004. The company did, however, lose some ground when it sold off a minority stake in Tsingtao in 2009 to pay off debt from its acquisition of Anheuser-Busch.

Heineken, by comparison, is still far from cracking the top five brewers. Trevor Stirling, also of Sanford C. Bernstein, attributes the company’s sluggish progress in China to obstacles created by its long-standing Asian joint venture partner, Singapore-based Fraser & Neave. The companies have done business together in Asia since 1931 under the name Asia Pacific Breweries and more recently as Heineken-APB. Fraser & Neave’s biggest shortcoming as a partner was its preoccupation with separate interests in the property market, said Stirling. “Their opinion was, ‘Why would I invest money in low-margin Chinese beer when I can make a lot more money elsewhere in China?’”

This failure to aggressively pursue mainstream acquisitions cost Heineken-APB a chance of becoming a market leader, and the company appears to have given up on future mainstream beer investments. In the last few years, its China JV has divested from two major mainstream investments it did make, selling a 49% stake in Jiangsu DaFuHao Brewery in 2008 and a 21% stake in Kingway Brewery, China’s eighth largest brewer, earlier this year after failing to gain full control of the brewery.

There are some signs that Heineken-APB is turning around its China business; however, that gain has come largely from the premium segment. Heineken-APB broke even on its China operations last year after writing down a US$5.9 million loss in 2009, mostly on sales of its premium Heineken and Tiger brands. “I think it’s safe to say that Heineken has no ambition to be a major mainstream brewer in China,” Stirling said.

Heineken-APB is not the only company pursuing this strategy. With the mainstream beer market on a slow track to profits, the three primary Benelux beer companies are all looking to premium products for more immediate profit growth.

“Pricing isn’t something you can force in China – the only thing you can do is improve your mix,” Kippers said. “So of course you can drive this by sending people more toward the high-end and doing less publicity for your low-end brands.” Premium beers can command prices as much as 15 times that of mainstream beers, he said, allowing for much higher profit margins.

Premium beers are expected to grow from 3-5% of the total market to up to 15% in the next five to 10 years, according to various analyst estimates. Going after the premium segment is hardly a new strategy for foreign brands in China, though some beer brands have gone further to reinvent themselves than others. Pabst Blue Ribbon made a particularly bold foray into China’s premium market in 2009, when it released a brand called “Blue Ribbon 1844” that retailed for US$44 a bottle – drawing guffaws in the US, where PBR’s stereotypical customers are old men and broke hipsters. The beer has found modest success selling 180 hectoliters at high-end private clubs in 2010, and Pabst projects sales to double in 2011.

In comparison, AB InBev and Heineken beer brands didn’t require much reinvention. AB InBev’s premium portfolio is dominated by Budweiser. A can of Bud is about as mainstream as it gets in America, but – as for brands like Pizza Hut and Gap Inc – the sheer American-ness of it made it a premium product in China. Budweiser is now the market leader for premium beer and accounts for most of AB InBev’s 45% market share in the premium segment, said Stirling. Bud has helped AB InBev gain ground in earnings despite slightly declining sales volumes as the company shifts its plants from producing mainstream to premium products.

AB InBev has other truly Belgian beers such as Stella Artois, Hoegaarden and Leffe in its portfolio, but they make up a very small part of sales in China. Stella Artois represented only 10,500 of AB InBev’s 50 million total hectoliters sold in 2010, although Stella sales are also predicted to grow with the premium market, said Andy Chang, brand manager for Stella Artois in China.

Heineken-APB, in comparison, has now eked ou
t about 7% of China’s international premium market, according to Gerard Rijk of ING Commercial Banking. Besides the company’s namesake brand, which is naturally considered a premium beer, some of that share is from its production of Tiger, which Heineken-APB launched in Singapore, and Anchor, which is primarily distributed in Hainan province.

Most Heineken and Budweiser beer that is drank in China is made here using local raw ingredients and labor, contrasting from import-only Duvel. Duvel began importing its products into China in 2007 after setting up a wholly-owned subsidiary in Shanghai. The logic, said Jonathan Cartu, director of operation for Duvel Moortgat Shanghai, is that Duvel’s speciality beer must be imported because it wouldn’t be the same if it were produced in China, almost like fine French wine. The company has experienced strong growth and has expanded from offering four beers in China to 17, said Cartu.

From the perspective of China’s overall beer market, however, Duvel is and will remain a small player, Kippers said. With no domestic production, Duvel must charge higher prices and sell lower volumes, and it can only hope to capture a small share of the premium market at the high end.

Analysts say foreign breweries are unlikely to face much of a challenge from their Chinese counterparts when it comes to premium beer. “They don’t have the premium brands; they don’t have the global philosophy,” said Rijk of ING.

However, China’s major brands do stand to gain profitability and market share as the industry consolidates and oversupply is reined in. Ownership of China’s beer industry is far more fractured than in most developed beer markets, although progress is being made toward consolidation. The top four beer makers – CR Snow, Tsingtao, AB InBev and Beijing Yanjing Brewery – accounted for 54.1% of the market in 2009, up from only 18.9% in 2000. That’s still far from Western beer markets such as the US, where the top two companies in the market control roughly 80% of sales.

If they were permitted, the Big Four international beer companies would have already bought up two-thirds of the Chinese market, as they have in other emerging markets. But local governments have little incentive to sell their stakes in local breweries because consolidation might threaten the current excise tax collections from beer, which Kippers describes as a “cash cow.”

In the meantime, beer companies are eyeing inland second- and third-tier cities for markets that have yet to become as hypercompetitive as coastal cities. AB InBev opened a new factory in Sichuan earlier this year; Duvel opened a branch office in Wuhan last year and another in Xi’an in August to supplement its Shanghai, Beijing and Guangzhou locations.

Being one of the first premium beer companies on the scene in smaller cities pays off, said Cartu of Duvel. If it enters the market early, Duvel can sell more premium beer in a western city of 1 million people than in some saturated eastern cities of 10 million, he said.

Higher profits may be attainable for all Benelux beer companies in the premium market. For now, however, only AB InBev seems poised to have China become a major part of its global business. But the company still has a way to go towards improving profitability: It sells about 6% of its beer volume in China but makes only 1% of its underlying profits here.

Meanwhile, Heineken is also likely to see growth and higher profitability in China, but the country remains a minimal part of its business. Asia-Pacific accounts for less than 1% of the company’s overall volume with China only accounting for a small portion of that. The Heineken-APB joint venture will also cut into future profits that Heineken stands to make.

“China is going to remain a very difficult market for many years to come and you’re looking at least five to 10 years before it starts to become a significant profit contributor for these companies,” Stirling said. “You have to have deep pockets and a long time frame.”