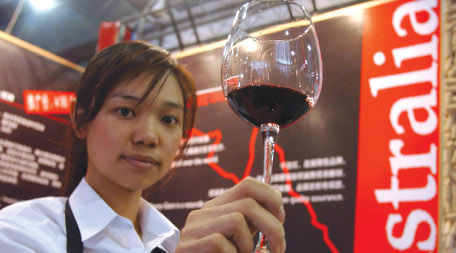 Ivan Li takes a glass of Australian Penfolds wine in his hand, eyeing the crowd at an upscale Shanghai wine bar. The twenty-something professional swirls the glass, takes a deep sniff and then a delicate sip. The motion seems practiced and smooth, and from a distance, one might think he was an sommelier. Actually, Li picked up amateur wine connoisseurship last year, when a new sales job gave him the cash to experiment.

“It’s fruity,” he said, a pleasantly surprised expression on his face. “Not bad.” Li walks back to a table full of friends, chats and finishes the glass in about 10 minutes. He then orders another glass of wine, this time a Joseph Cattin Gewurztraminer from France. Why not another Australian wine? “Oh, we just usually go with French wine,” he said.

That’s the last thing that the Australian winemakers who are looking to China to resuscitate their fortunes want to hear right now. A combination of inclement weather, wildfires, oversupply, a strong Australian dollar and changing consumer tastes have already seriously dampened demand for Australian wines both at home and abroad. Australian companies that expanded or made acquisitions during the peak market last decade are suffering even more. “These are the worst times that we’ve experienced in our industry in a generation,” said Andrew Wilsmore, acting chief executive of Winemakers Federation Australia, in May.

Yet while China is undoubtedly a fast-growing consumer market, it is also highly fragmented, competitive, and prone to changes in consumer taste. Chinese demand may give a long-run boost to Australian producers, but it is unlikely to prove their salvation in the short term.

A place to grow

At present, China accounts for a relatively small proportion of Australia’s total wine exports: just 7% by volume last year. The UK, Australia’s largest export market, imported about five times as much Australian wine, while the US imported roughly four times as much as China.

However, China’s demand is growing quickly; last year, Australia’s wine exports to China grew by a staggering 36%. Meanwhile, growth in other markets has been anemic. Exports to the UK grew 4% last year, while sales to the US fell 15%. Even in Australia, domestic wine consumption fell by an annualized rate of 21% in the first quarter of 2011 – its biggest decline in 20 years.

The rampant growth in the Chinese market is expected to continue. Experts forecast China’s wine consumption to increase at an annual rate of 20% to 126.4 million cases by 2014. “The volume we sell to China today as a proportion of total exports is still relatively small,” said Angus McPherson, export sales manager at Casella Wines, one of Australia’s largest winemakers. “But in the future we see it playing a significant role.”

Australian winemakers desperately need a growing market, because the industry has faced increasing challenges in recent years. Perhaps the most significant has been the unprecedented surge in the value of the Australian dollar.

Stephen Harvey, Sydney-based chairman of Deloitte’s Australian Wine Industry Group, notes that international consumers began turning to Australian wines in 2001 and 2002, when the Australian dollar was worth about US$0.65 – sometimes dipping below US$0.45. Now the Australian dollar is trading at around US$1.05, thanks to Australia’s exposure to the global commodities boom – in large part driven by demand from China. This has resulted in an exchange-rate driven “Dutch Disease” in other Australian export sectors. “There’s been, in effect, almost a 100% cost increase just due to the exchange rates,” said Harvey. “That’s had a major impact on the margins of Australian wine producers.”

He points out that too much rainfall in some years led grapes to rot. Other years too little rainfall led to wildfires, creating a noticeably smoky taste in many wines. “It’s all pushed the industry to the edge,” said Veseth.

These woes have been compounded by a more intangible problem – a global consumer shift away from Australian wines.

The rise of Aussie wine

Australia’s wines came to prominence in the late 1980s, thanks in part to the 1989 takeover of Orlando Wines – maker of the Jacob’s Creek brand – by French drinks company Pernod Ricard. The latter’s strong distribution network made Jacob’s Creek and other Australian brands more accessible to consumers in the US and Europe.

This takeover also coincided with a shift in expert opinion; New World wines gradually began to displace those of France and Italy in the blind taste tests of some respected sommeliers. Prominent critics began to turn away from Old World wines and concentrate on reviewing new, different, and often cheaper bottles from South Africa, Chile, the US and, of course, Australia.

Australia’s hot climate causes grapes to ripen faster than in Europe, which leads to a higher alcohol content and a more direct, fruity taste. Australian wines can, as a rule, be opened at once (as opposed to many French wines, which are best uncorked years after purchase), and some consumers prefer their more straightforward taste to the complex acidity of Old World wines. Australian companies also made their wines more accessible by following the US example for labeling, naming most wines by their grape varietal, instead of by regional appellation. New drinkers have no need to run a cross-reference search to figure out what grapes are in a given Australian bottle, unlike a Haute-Medoc or a Barbaresco.

However, some Australian winemakers soon began to overplay their distinctiveness. “There might have been a little bit of a shoot towards some of those high-alcohol wines that probably went too far,” said Deloitte’s Harvey. The extremes eventually turned off some critics and consumers in the US and Europe, sapping demand after the mid-2000s.

Ironically, as University of Puget Sound economist Veseth pointed out, while the world at large has turned away from Australia’s “one-note” wines over the past half decade, it is those very traits – simplicity and directness – that may endear them to Chinese consumers.

“Particularly when we started four years ago, there was a big difference between the tastes of our Chinese and foreign clientele,” said Pierre Monie, CEO and chairman of Shanghai-based Enoterra Group, which comprises a wine import business and wine bar chain. “Chinese drinkers clearly favored direct, single-image wines with low tannin levels.”

This encouraged Monie’s company  to import more New World wines, especially from Australia, Latin America and the US. “At one point we were scouting Australian winemakers that produced unusually low-tannin wine.”

In addition to preferring relatively simple wines, Chinese consumers also tend to emphasize the status symbol element of premium wines. “In China, wine tends to be purchased based on brand and price rather than quality and taste,” said Lucy Anderson, Asia director at Wine Australia, the government’s wine promotional body, in an emailed response to China Economic Review.

In practical terms, this made life easier for wine importers – Monie notes that his company needed only to buy the most well-known brand from each country – but strongly favored prestigious Old World wines over the recent entrants from the New World.

“Until recently, most of my Chinese clients’ requests revolved around a few select, prestigious Bordeaux and Burgundy brands,” said
Jonathan Beagle, an independent wine broker with clients in Europe and Asia. “But there’s been something of a shift lately, with clients beginning to focus more on taste and less on the label.”

Enoterra’s Monie also notes that the gap between his Chinese and foreign clients has narrowed dramatically in the past two years. “The Chinese have educated themselves at an extraordinary rapid pace,” he said. “I see them come in here now with their iPhones, their translated wine guides and the latest [Robert] Parker reports. They want stuff even I’ve never heard of.”

In theory, Chinese consumers’ willingness to look beyond the label and focus on substance should benefit Australian wines. But Australian winemakers still face daunting challenges in the China market.

Globally, Australian wines occupy a mid-market position, and are known for delivering value for money. Most expect the same general marketing strategy to carry over into China – abandoning the low range to domestic brands, and leaving the high range mostly to Old World wines.

In practice, however, this strategy is easier said than done. Australian winemakers face two overriding challenges in the China market: reputation and distribution.

On the reputation side, Australian brands face a crowded market filled with both imported and domestic brands. Domestic wines still dominate the local market, accounting for 85% of total market share. Among the imports, French wines account for 46% of market share – and that figure is growing.

Furthermore, Australia does not produce a single runaway brand in the China market, comparable to the success of Jacob’s Creek in the UK or Yellow Tail in the US. This means that “Brand Australia” lacks a clear, simple marketing narrative for Chinese consumers.

Anderson of Wine Australia said that the best way for Australian winemakers to raise awareness in the China market is through relationships – visits to China, wine-tasting tours to Australia, consumer education, and so on.

Such relationship-building is also necessary to create a distribution network, the crucible of China’s wine market. “Distribution is definitely our biggest challenge,” said McPherson of Casella Wines, a comment widely echoed by industry insiders. “If you go to the UK, it’s very clear how to enter the market. If you go to China, it’s highly fragmented. There are many distributors, many wholesalers, each with tiny market shares – it’s very difficult to get full market coverage.”

Furthermore, while the China wine market is growing rapidly, the current size will remain quite modest for some time. Wine Intelligence, an industry research agency, suggests that the current market for imported wines in China may be made up of only 14.8 million people. Australian wine exports to China grew 27% last year, but China’s overall wine imports grew by 61%. Thus Australia’s market share of the Chinese wine import shelf declined 16%, down from around 20% in 2009.

Still, Australian winemakers are hardly in a position to complain about a growing market. Following a bout of acquisitions and expansions before 2007, the country’s five major wine producers – Pernod Ricard, Casella Wines, Constellation (soon to be Accolade), Treasury Wines and Australian Vintage – have nearly all been either downsized or seen their margins shrink drastically. “Treasury Wines – like many of these large Australian winemakers – is actually quite profitable; that’s not the problem,” said one industry insider, who asked not to be named. “The problem is that they have just paid too much to acquire new operations. Treasury, Constellation – they all bought or expanded when the market was high. They’re profitable, but the return on investment isn’t commensurate with what they paid.”

This may make Australian winemakers attractive acquisition targets. Shanghai Bright Food Group, for example, is rumored to be considering buying Treasury Wines, which is overextended. Bright Food denies the rumors, but then again so do many firms in the midst of negotiations. Regardless, if Chinese firms start acquiring troubled Australian vineyards, it could lead to a major influx of Australian wines into China, similar to what Pernod Ricard’s acquisition of Orlando Wines did for the country in European markets.

Australian wine exports to China are almost certain to continue to grow in
absolute terms. But gaining market share from competitors, building distribution network coverage, and educating the consumer base takes time and resources. A smart long-term play perhaps, but a panacea for poor commercial decisions made during the boom years it is not.

“I do sense that Australian winemakers will have a comeback, at least in part thanks to China,” said Veseth. “But it will be tough. And it will get worse before it gets better.”