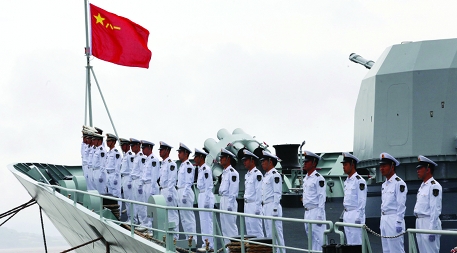 On June 15, one of China’s biggest civilian patrol ships set sail from the country’s southern coast. The vessel, the Haixun-31, is charged with monitoring shipping, inspecting oil wells and, according to state media, protecting the country’s “rights and sovereignty” in the South China Sea.

The area has been a source of tension for decades, but China has become noticeably more aggressive in the past two years – signaling that it is no longer as concerned as it once was about mollifying regional anxieties over its growing economic and military power. It’s gone beyond rhetorical posturing: Vietnam has accused Chinese ships of sabotaging its oil exploration boats twice, including a recent incident in June. In the same month, the Chinese navy allegedly fired on Filipino fishermen in disputed waters. By mid-June, 14 Chinese naval vessels were conducting military drills, including amphibious operations, off the southern island province of Hainan. There is conflict on land, too, over Chinese dams that limit water flow on the Mekong and other rivers that feed into Southeast Asia.

China is clearly planning to keep force on the negotiating table. It is publicly engaged in retrofitting a Russian aircraft carrier, and it will increase its maritime surveillance forces to 16 aircraft and 350 vessels by the end of 2015, and more than 15,000 personnel by 2020.

It had seemed until recently that the Association of Southeast Asian Nations (ASEAN) was becoming a viable counterweight to Beijing. Today, not so much.

Vietnam, which has exchanged fire with China in the South China Sea in the past, is taking strong unilateral action. In June alone it allowed public protests in Hanoi against China’s territorial claims, conducted live fire drills in disputed waters and encouraged foreign navies to stop at Cam Ranh port.

Unfortunately, increased tension comes just as China’s economic ties with ASEAN are becoming closer and more complex. Chinese companies are increasingly moving manufacturing to ASEAN countries, and the region is becoming a key market for Chinese goods, facilitated by the China-ASEAN free-trade agreement. The free trade area has the third-largest internal trading volume after the US and Europe.

At the same time, ASEAN economies need China as much as China needs them, if not more, both to complete parts of their supply chains and as a growing source of consumer demand.

Closer ties have more places to fray,  and the South China Sea spat is unlikely to derail regional development in the short term. But it is already forcing ASEAN to regroup, rejuvenating US influence in the region and giving fresh cover to anti-Chinese sentiment. Whatever happened to soft power?