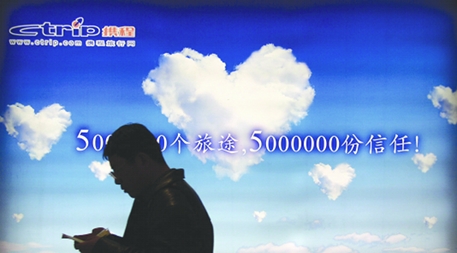 Ten years ago, the Chinese travel market was full of opportunity for the entrepreneurial businessman. Getting around China was an exasperating business. Unhappy travelers were forced to deal with a mess of paper tickets, faxed hotel reservations and state-owned travel agencies that were legendary for their poor service.

“There was no single travel agency in China that could provide nationwide booking services,” Fan Min, the CEO of China’s biggest online travel company Ctrip, said during a press briefing at Ctrip’s office in Shanghai. According to Fan, his company’s success was due in no small part to timing: It entered a market with no real competition, bearing a product customers were desperate for. Within four years of its founding, the company became one of the first Chinese firms to list in the US.

Since then, China’s online travel market has swelled, driven by the steady advance of broadband connectivity and rising disposable income. Competition has followed. In the market’s leading cast of characters, however, there has been surprisingly little change. Ctrip has steadily chipped away at the market share of offline agencies, and has resolutely outpaced its somewhat distant runner-up, Elong, which is partnered with the US-based Expedia travel portal.

Thus Ctrip’s position looked secure until recent months. In May, Chinese internet giant Tencent announced that it would invest US$84 million to acquire a 16% stake in Elong, giving Ctrip’s old nemesis a fresh cash injection. At the same time, the market was invaded by thousands of Chinese group-buying sites, many of which are offering cheap travel deals. The conventional online travel sector has also seen intensified activity. A travel service launched by Taobao, the Alibaba Group’s domestic B2C e-commerce platform, is starting to gain steam, supported by its connection with the secure payment escrow tool AliPay; paying for a plane ticket or hotel room through escrow is attractive to travelers concerned about overbooking and dropped reservations.

But on the stock exchanges, a shakeup is already underway. In May, Ctrip’s share price lost nearly 7%, compared to a 62% increase for Elong. Investors appeared to be betting on an upset.

Most of the action happened on May 16, when Elong unveiled Tencent’s investment and at the same time Ctrip released first-quarter results. Ctrip’s revenue beat expectations, but the company gave disappointing projections for second quarter growth. Its share price fell 5.5% on May 17, while Elong’s jumped 65% on the same day.

These figures suggest popular opinion has shifted against Ctrip. But a closer look at the market shows investors are probably overreacting.

Ctrip did forecast slower annual growth in second-quarter revenues: 15-20%, compared with a 30% year-on-year increase in the previous quarter. However, as Morgan Stanley analyst Richard Ji pointed out, Ctrip’s second quarter is being benchmarked against an unusually strong previous performance. Travel bookings for the Shanghai World Expo and the acquisition of Wing On Travel, a Hong Kong company, both provided one-off boosts to Ctrip’s revenues in mid-2010 that distorted its performance upward.

Furthermore, Ctrip’s guidance is consistently conservative. Revenues have exceeded the company’s forecasts in every quarter since the beginning of 2009.

Investors may also be overstating Elong’s potential. Analysts have praised the company for its focus on online booking. Ctrip, by contrast, still fills 60% of its orders through its call centers. It’s true that online booking and payment are the way of the future. In China, however, that future remains a long way off.

Ctrip may be China’s biggest online travel company, but it could potentially grow much larger. Tier-one cities currently account for the majority of its business, leaving a huge potential market in the thousands of smaller cities where people are just starting to travel for leisure. At least initially, most of these customers will likely prefer to book by telephone and pay in cash.

Even Ctrip’s mostly big-city customers have accepted online services only grudgingly. More than 40% of Ctrip’s bookings are now completed online, compared to nearly 30% ten years ago. On Ctrip’s English site, meanwhile, 90% of the bookings are made online.

Elong is the first to acknowledge that it is pursuing only a small slice of China’s travel market. Although the company has said that it aims to be China’s number one online travel provider, its interim goal is more modest.

“Our strategy is to win online hotel booking,” Elong’s CEO, Guangfu Cui, told China Economic Review. “It’s very clear that we are not about to win call center booking, package or corporate travel, but we are going to focus on winning online hotel bookings.”

That goal may be achievable. Elong already offers more than 20,000 partner hotels in China, compared with 18,000 for Ctrip. Meanwhile, Ctrip is focusing on expanding other parts of its business, like package tours and corporate travel – although air and hotel remain its most profitable segments.

Investors may also favor Elong because its controlling shareholder, Expedia, is a familiar success story. Expedia’s partnership with Elong, which mainly consists in pooling hotel resources and experience in the online travel industry, has undoubtedly boosted business for both companies.

However, the tie-up is probably less relevant for Chinese travelers than Ctrip’s acquisitions of package tour companies in Hong Kong and Taiwan. In 2010, all of the top ten most popular destinations for Chinese tourists outside of the mainland were in Asia; Ctrip CEO Fan said the company plans to limit its scope to Asia when looking for future acquisitions.

That doesn’t mean that Ctrip will not face tougher competition in the coming years. For one, both Ctrip and Elong admit to feeling some pressure from the group-buying segment. Dan Su, an analyst at Morningstar, argued that Ctrip’s first-quarter results show the strain: Net revenue and operating income both grew at the slowest pace since mid-2009. However, the saturated group-buying segment is due for a shakeout: There are literally thousands of such sites in China. Ctrip has already started its own group buying site and is in a strong position to enforce exclusivity clauses in its contracts.

Elong’s link-up with Tencent is a more serious threat. The details are still vague; Elong’s Cui claims the partnership will be about more than just advertising but did not go into details. But even a relationship limited to advertising could push a lot of customers in Elong’s direction: Tencent’s QQ instant messaging service is one of the most potent online marketing channels in China. The QQ client allows Tencent to drop hyperlinks onto the desktops of hundreds of millions of Chinese internet users.

Ctrip is not too worried yet, though. “We still need to watch how it works,” said Fan. “About three years ago, Renren also bought some shares on the open market and became a significant shareholder of Elong. They also wanted to form some cooperation, but in fact they got something quite different.” What they got was somewhat lackluster: an Elong booking widget for Ren
ren’s site.

Ctrip looks likely to keep fending off competition in China’s online travel scene for the foreseeable future. There’s just too much new ground yet to be broken, and Ctrip still holds the biggest shovel.