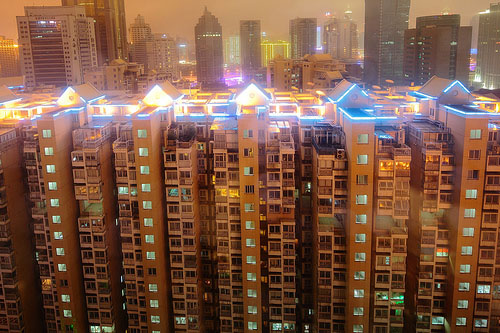 
It came as no surprise that the issues of affordable housing and growing income disparities featured prominently in Premier Wen Jiabao’s address to the National People’s Congress. Despite upward shifts in industrial wages, the gap between urban and rural citizens continues to widen. With little mitigation of consumer inflation growth on the horizon, the squeeze on lower income groups is becoming more acute.
Given rapid rates of urbanization, it is increasingly difficult for blue- and some white-collar workers to secure adequate housing. The government’s pledge to boost the number of affordable homes this year is meant to assuage growing popular anger, but it will take more than speeches and targets. Beijing will have to deliver this time and remove any financial or bureaucratic barriers that stand in its way.
The government has pledged to funnel US$198 billion into the construction of new subsidized apartments this year, up from the US$118 billion it earmarked for affordable housing in 2010. It also said it will build 10 million affordable homes across the country. This is significantly higher than the target of 5.9 million units set for 2010.
It is an impressive figure, but the government has repeatedly failed to uphold previous public commitments to increase the supply of affordable housing. Infrastructure and low-income housing were meant to have taken the lion’s share of the US$586 billion stimulus package announced in 2008. The new roads, bridges and rail lines are very much in evidence – but while much housing was built, precious little of it was affordable.
One of the problems has been the recalcitrance of local governments, which have been slow to utilize land reserved for low-income housing. Out of the 184,700 hectares of land set aside for affordable housing projects last year, nearly a third – 59,300 hectares – remains unused.
But provincial bosses can hardly be blamed for dragging their feet. Beijing’s push for a massive boost in supply of low-cost homes is costly for localities. Of the some US$200 billion in planned expenditure, only US$76 billion will actually come from central coffers – the majority will come from local government budgets, already drained by spending mandates for other infrastructure projects.
More importantly, local governments face losing out on the juicy premiums they get from flogging parcels of land to commercial developers. In some cases these sales account for up to 25% of annual government revenues.
Local governments and developers also need greater incentives to build low-cost housing, which Beijing has yet to provide. At present, the profit cap on sales of low-cost apartments and houses is 2-3%. Wen has previously suggested that local housing initatives in Hong Kong and Singapore could serve as models. These governments have managed to create successful low-cost homes markets through combinations of price caps and subsidies supplemented with government-owned low-rent apartments.
But first, Beijing must find the money – an additional US$124 billion – to succeed in this year’s housing push. Professional property developers will be understandably slow to jump into what appears to be a not-for-profit industry, particularly as prospects for commercial housing sales darken. Institutional investors will also want to see what form the financial and political structure of this burgeoning sector will take before attaching their names to it.
While cash is important, how it’s used is critical. There are currently several central government agencies involved in overseeing low-income housing – the National Development and Reform Commission, the Ministry of Housing and Urban-Rural Development, and the Ministry of Land and Resources. Add to that the multitude of regional departments, each with their own subdivisions, and very quickly the need for decisive leadership becomes apparent.
In the absence of any one department with ultimate responsibility for the execution of this crucial task – a “housing czar” – central directives are administratively doomed from the outset. Without some sort of reform, Beijing’s good intentions and generous funding will be squandered, again.