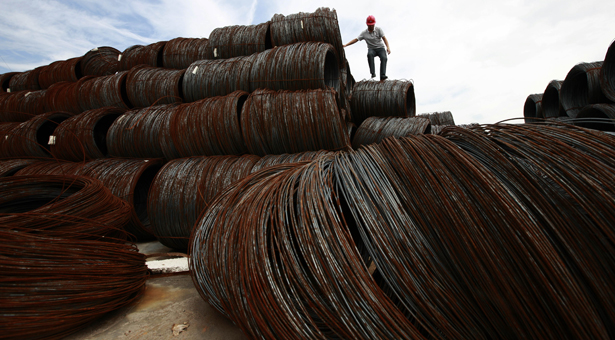 Since China initiated market-based reform in the 1980s and legalized private enterprises, that segment of the economy has expanded rapidly. China revised its constitution in 2004 to emphasize that “the legal rights and interests of the private economy and non-public-owned economy must be protected,” and that the government should “encourage, support and guide the development of non-public-owned economy.”

However, not long after this constitutional amendment, the development of private enterprises made a surprising reversal. China’s private sector developed slower than expected as it encountered huge impediments.

“The state advances, the private retreats”

The concept of guojin mintui, meaning “the state advances, the private retreats,” is hotly discussed in China. The catch-phrase refers to massive investment through state-owned enterprises at the expense of private (i.e., non-state-owned) enterprises.

Many observers point to the 2004 “Tieben incident” as the turning point from encouragement to repression of the private economy. In 2003, privately owned Jiangsu Tieben Steel launched a project worth US$1.58 billion. Although it had the backing of the government of Changzhou, Jiangsu province, the central government suspended the project on the basis that it violated regulations including land usage and taxation. Senior Changzhou officials were severely punished, as was the company’s chief executive.

In truth, the project was terminated because it posed a strong challenge to less-efficient state-owned steel companies. Though local officials and financial institutions “hi-jacked” the project and caused many of its problems, Jiangsu Tieben paid for it. The company was forced into bankruptcy, and an SOE absorbed the US$800 million project. Jiangsu Tieben became a victim that would serve as a warning to all private enterprises.

Since the 2008 financial crisis, the government has stepped up efforts to support state-owned enterprises (SOEs), helping the largest ones embark on  “winner-take-all” acquisition frenzies. The restructuring and merger of Shandong Steel and Rizhao Steel, as well as the SOE takeover of coal mines in several provinces, propelled guojin mintui to new heights.

Rizhao Steel was a profitable private company, while Shandong Steel was an SOE with heavy losses. As part of the Shandong government’s goal of becoming the country’s largest steel maker, it used administrative measures to force the unprofitable SOE to acquire its more profitable counterpart and forge a new steel company in which Rizhao only controlled a 33% share. Du Shuanghua, the CEO of Rizhao Steel, had no choice but to resign.

Another important case began in 2009, when China’s major coal producing provinces, including Shanxi, Henan, Shaanxi and Inner Mongolia, each went through industrial “restructuring.” According to guidelines instituted by the Shanxi provincial government, private coal mine operators were to be “integrated” with state-owned enterprises, either by selling their businesses to SOEs entirely or selling most of an enterprise while retaining a minority equity stake.

Local authorities also set the sales prices of the mines. Mines that local owners estimated to be worth of hundreds of millions of yuan were valued at one-tenth of that amount. Even more worrying to the private mine owners was that there were no compensation clauses or payment details in the acquisition contracts, even though they had given up the mines at huge losses.

The advancement of the state and the retreat of the private sector in China is not an isolated phenomenon but a dominant trend. It has squeezed out the space private enterprises need to survive. It has been carried out under the hypocritical guise of “integrating, merging and restructuring resources,” rather than through fair market competition. And since local authorities have carried out this process through political means, private enterprises have had little power to negotiate.

The suppression of private entrepreneurs

Anyone who commits an illegal act, including entrepreneurs, should be held accountable and punished accordingly. But in China the reality is that the rights of private entrepreneurs are often violated during prosecution. Many trials have involved obvious and consistent violations of due process, including interference by senior officials, jury manipulation, the presumption of guilt, fixed outcomes, collusion to determine judgments, forced confessions and the mistreatment of lawyers.

One famous case is that of Shaanxi Yulin Kai Qilai Energy Investment Company, which signed a coal mine exploration contract with the provincially owned Xi’an Institute of Geological and Mineral Exploration. After they discovered the field had rich coal deposits, the Shaanxi authorities cancelled the contract. Zhao Faqi, Kai Qilai’s legal representative, appealed the case in the province’s Supreme People’s Court and won the lawsuit. But authorities sent a confidential letter to the Supreme Court to intervene in the hearing, canceled the company’s legal registration and arrested Zhao Faqi for falsifying registered capital.

In the case against Li Qinghong, a wealthy investor who was prosecuted as a mob boss, the trinity of public security, investigation and the court – which are supposed to provide for the checks and balances required by law – became mere formalities. Guiyang authorities even illegally diverted the case from the city court to a lower court, the People’s Court of the Xiaohe District. In the trial, the vast majority of witnesses were not present. The court was illegally closed to the public and social media coverage was banned. Only official media was allowed in. All these factors impeded justice.

The private entrepreneurs who were caught in Chongqing’s crackdown on organized crime experienced the worst treatment of recent memory. Since 2009, Chongqing authorities investigated 551 gang-related groups, arrested 7,723 suspects and took in US$2.47 billion in fines and recovered assets. Many wealthy private entrepreneurs (including the city’s three richest) saw their families and fortunes decimated during this period.

Bo Xilai, former Chongqing party secretary, led the mafia crackdown that was implemented by the municipal Public Security Bureau with the cooperation of courts and prosecutors. The bureau used China’s fuzzy legal provisions against “mafia” to arbitrarily conduct prosecutions. The liberty, property and even the lives of many entrepreneurs depended entirely on the will of the people in power.

In several of these cases lawyers were also harassed, leaving the entrepreneurs without an adequate defense. Li Qinghong’s lawyer was admonished or expelled several times without cause. But the most famous case was that of Li Zhuang, a Beijing lawyer who was hired to help defend Gong Gangmo, a company owner who was also charged as an organized crime boss. Li was charged with fabricating evidence and given a prison sentence. But just as he was about to be released, he was charged with further crimes. Because the allegations were clearly fabricated and his friends and colleagues put pressure on authorities, Li ultimately regained his freedom.

The reasons for the frequent suppression of private enterprises in China are complex. One central cause is the ease with which China’s political interest groups can influence public policy. It is an open secret in China that, due to the lagging political reform, powerful interest groups dominate business and even the country. The problems that private enterprises face in China are a result of the “fat pig” phenomenon: Chinese authorities encourage the growth of the private sector when the national economy is in trouble, but once the private economy starts to boom – when the pig gets fat – the government steps in with various excuses to skim profits off the top.

As everyone knows, power in China is centralized under the Communist Party. Political power is highly concentrated in the hands of Party organizations and cadres, and their powers are unchecked by democracy, separation of powers or the rule of law. This system creates the possibility for officials to systematically promote guojin mintui.

Under China’s current system, all government officials are subject to limited terms in office, with the more important officials rotating to different posts on a regular basis. They are not held responsible to an electorate, nor to rule of law. This system inevitably breeds myopic officials who behave like roving bandits, enriching themselves as much as possible during their limited terms of service.

China’s laws also contain extremely stringent rules on private enterprises. This popular saying vividly illustrates the problem: “[If you want to] find fault with an enterprise and it doesn’t evade taxes, check if it’s operating illegally. If it’s not operating illegally, check its registered capital. If its registration isn’t fake, check if it has illegally resold land. No matter what, there are nearly a hundred accusations that can be used against enterprises in China today!”

Beyond these, other common charges include “illegal deposit taking” levied against Sun Dawu, the owner of Hebei Dawu Farming and Stock Breeding Group, several years ago, and “fraudulent fund raising” directed against the self-made Wenzhou billionaire Wu Ying last year. Because the boundaries for these charges are ambiguous, they can easily be used to crush private company owners.

To solve the predicament facing China’s private enterprises, the first step is to clarify incorrect ideas, prevent interest groups from further misleading the public and remove obstacles to the development of the private economy. These goals must be achieved through political reforms, namely through two key steps. First, the ruling party and officials must be held accountable to the public, to ensure that their actions are for the public good, rather than self interest.

The second is about rule of law and constitutional government. The party and officials should only be able exert powers under the restraint of the constitution and other legal authorizations. It is also necessary to establish an independent and fair legal system to protect individual freedom and wealth.

Of course, achieving those goals will require tremendous effort. But that doesn’t mean there is no hope. First, the Chinese people increasingly desire democracy, rule of law and a constitutional government, and their public voice is growing stronger. From a long-term perspective, China’s current political and economic model is not sustainable.

In spite of China’s urbanization, industrialization and forceful government stimulus measures, growth under the current economic model will one day reach a limit.