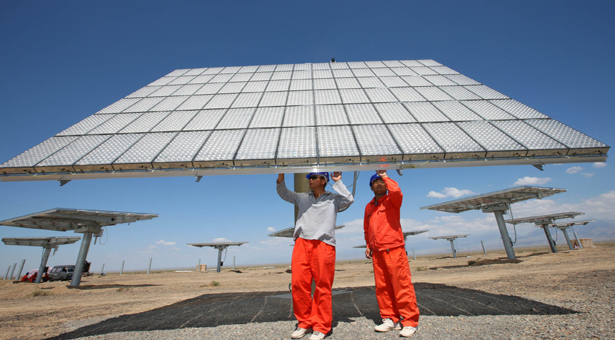 Contrary to popular wisdom, evolutionary biology holds that most adaptations appear not gradually over time, but within short spans of rare and rapidly unfolding events. The solar industry’s experience suggests the same principle may hold true for companies: Harsh times force companies to adapt quickly or die out.

Conditions have gone from bad to worse in the solar sector. Subsidies for renewable energies have dried up, especially in Europe, oversupply has pushed prices so low that many companies are reporting heavy losses, and manufacturers are facing escalating trade barriers in the US, EU and China. Solar stocks plummeted to a three-year low in the first quarter of this year.

But Trina Solar looks comparatively well-placed to weather these conditions. Like most of its competitors, Trina is suffering from mounting losses and slumping share prices. Yet while other solar manufacturers have declared bankruptcy or scaled back their operations, Trina still has the firepower to expand its reach into Canada – a move that will help it bypass tough new trade barriers in the US and give it a competitive edge over its rivals.

Trina Solar is certainly not immune to many of the headwinds affecting the industry. Last October, SolarWorld, the US subsidiary of a German company, filed a petition with the US Department of Commerce claiming that Chinese manufacturers were “dumping” solar cells on the US market at below the cost of production. In March, US President Barack Obama announced an initial tariff on Chinese solar imports that ranged from 2.9% to 4.73%, with the highest rate applied to Trina.

The commerce department then issued a preliminary finding that Chinese manufacturers have been exporting solar cells at prices between 31.1% and 249.9% below normal market price. When the final ruling is issued on November 30, Trina could face an anti-dumping duty of 31.1% on imports to the US, far outpacing its current rate of 4.73%.

US competitors charge that unfair trade practices and a healthy dose of government support have helped Trina to build its large market share (it currently ranks fourth among global photovoltaic manufacturers). Trina attributes its success to its efficient, vertically integrated business model. However, the truth is somewhere in the middle – both factors have helped the company to grow.

Trina’s market share has risen rapidly, especially between 2008 and 2011. In 2010, the company’s net profits jumped 223.7% year-over-year to US$311.5 million. But this halcyon growth is now a thing of the past. While its module shipments increased 43% in 2011, Trina’s profits swung to a net loss of US$37.8 million as its expansion in Australia and Asia increased operating costs.

The main driver of losses in 2011, however, was an oversupplied market that pushed average sales prices to record lows. This downward pressure continued into the first quarter of 2012, when Trina reported a net loss of US$29.8 million. Analysts expect the drop in prices to moderate but are forecasting continued negative pressure into the second half of 2012.

Additional US and EU tariffs could wreak havoc on Trina’s bottom line and its ability to compete in both markets. However, the tariffs can be circumvented. The US tariffs only apply to imported cells and modules made in China from Chinese parts. If Chinese companies import cells from another location (for example Taiwan) and then assemble them into modules in China, they can bypass the tariff. This roundabout process raises costs, but by far less than the proposed 31.1% duty.

This may be why Trina announced in July that it was setting up a sales and business development office in Ontario, Canada, and forming a partnership with Silfab Ontario, a local manufacturer. The expansion was surely driven in part by Ontario’s lucrative feed-in tariff (FIT), a policy mechanism that offers renewable energy to power producers at a fixed price. However, the Canadian expansion will have the added benefit of helping Trina evade punitive US tariffs.

Trina could also consider expanding its operations in the US or Mexico. Expanding abroad requires either significant capital investments or strategic partnerships like that with Silfab Ontario. With Trina’s earnings currently in the red, partnerships seem the smarter option.

The global solar industry is set to consolidate in the next few years, as low module prices will hit smaller and less efficient firms the hardest. Trina’s sheer size and prudent responses to the threat of tariffs in its consumer markets will make it more likely than most to survive the drought – and firms that weather the current storm could be in a position to dominate the market when brighter days arrive.