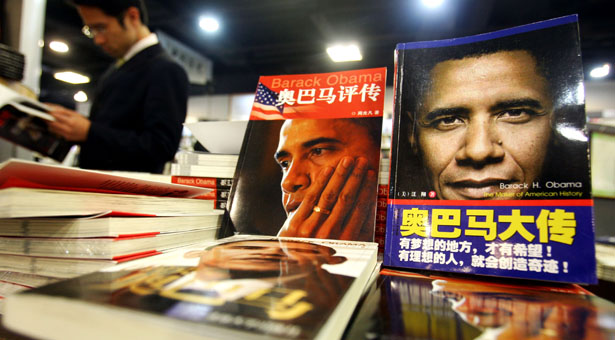 By some accounts, the world’s most important bilateral relationship is becoming increasingly uneasy. Trade disputes between the US and China have multiplied, the US presidential campaigns are rife with complaints about China stealing jobs and manipulating its currency and China is disparaging the US for opposing its claim to the disputed Diaoyu/Senkaku Islands.

The average observer could be forgiven for seeing the relationship as a zero-sum game. But Kenneth Lieberthal, the director of the John L. Thornton China Center of the Brookings Institution, argues for more nuance. While the US does have legitimate complaints about China, Chinese success is ultimately good for the US, and vice versa, Lieberthal told China Economic Review.

Lieberthal has a distinguished career in foreign policy, serving as a special assistant to the president for national security affairs and senior director for Asia at the US National Security Council during the Clinton Administration. He is also a former professor of political science at the University of Michigan and the author of several books, including the recent “Bending History: Barack Obama’s Foreign Policy.”

What are your thoughts on the role that China has played in the US election? Is it different than previous campaigns?

It’s significantly different from 2008, but that’s because Obama made a very conscious decision in 2008 not to campaign on China. That’s partly because he recognized that a constructive relationship was in our interest, and he didn’t want to campaign on the basis of suggesting that it wasn’t. George W. Bush, for all his idiosyncrasies in how he approached friends and enemies, built a very strong relationship with Hu Jintao and the Chinese leadership. While Obama had a lot of differences with Bush, he was not going to argue that Bush fundamentally made a mistake by building constructive relations. If you go back before that, it’s fair to say that in most of the campaigns since the normalization of relations with China, this tough-on-China rhetoric has been a part of the campaign. But I don’t think it’s swayed any electoral outcome for the White House or even for the House or Senate. This is part of posturing in a campaign. It can have real consequences if the challenger is elected and has made specific commitments, but it doesn’t shape elections.

What has been the practical effect of Obama’s more aggressive stance on trade? Is a tough stance on China good or bad for the US economy?

Obama has no big strategic theory that leads him to feel that we have to compete with China across the board. He does not, like some people, believe that US-China conflict is inevitable. He is a pragmatic problem solver. But the one area where he is livid – I think that’s the right term to use – is on China’s economic and trade policies. I’m not quoting him directly, but I think it’s fair to say that he sees China following a highly mercantilist set of policies that disadvantage the US. What he has done, and I think this is exactly right, is to take economic issues that need to be addressed to the WTO. I was in the White House when we negotiated the bilateral trade agreement with China to join the WTO in the second Clinton Administration, and the major reason behind that strategy was that we could anticipate all kinds of future economic problems with China, especially on the trade side. It is a big emerging economy and it operates very differently than we do. If you don’t want to make all disputes into bilateral issues, you get China into the WTO where they agree to a set of rules and dispute adjudication procedures. It may be clumsy at times, but it tends to prevent trade wars. Obama has basically followed that. I know in his gut he thinks that the US needs to take strong action to protect its own legitimate interests. He’s not someone who thinks we have to sit back and wait for the Chinese to become liberal democrats and true believers in the free market. He thinks you’ve got to use the tools you’ve got, but don’t use them in a way that makes it much more difficult to get Chinese cooperation on other issues, for example, Iranian nuclear development.

What are your expectations from China’s new leadership?

My own view is that the Xi Jinping leadership is likely to be enormously focused on domestic problems, to the extent that they will, if given the option, seek to tamp down international tensions so they have more capacity to focus on domestic issues. If we have a president in office who sets out to challenge China to teach it a lesson, declare it a currency manipulator, apply new tariffs, execute a variety of unilateral actions to show the Chinese there’s a new sheriff in town, Xi Jinping will react very strongly. And he’ll do so for two reasons. One is the Chinese have experience with this before when the US has changed presidents, and their reaction always is that you have to show the new guy this is the wrong way to elicit cooperation from China. But secondly, Xi recognizes that he needs to build tremendous domestic political capital in order to carry out the reforms that are so necessary during his first five years in office. If in his early months he is seen as caving to the US, it will deeply damage his efforts to garner sufficient political capital to undertake the domestic reforms that are likely to be at the core of his agenda. But bottom line, I think the Chinese will want a much-improved relationship with the US. On the US side, if Obama is elected, I think he would be responsive and our policies would remain pretty much as they are now. With Romney, there’s more of an unknown quantity. He’s talking extremely tough on China, but then again he has no responsibility now but to get elected. Once elected, when he knows he has to cope with the consequences of whatever he does, he may choose to recalibrate significantly. We’ll have to see.

We’re seeing increasing uncertainty in China now, with the economy slowing and the leadership transition approaching. Are there scenarios with China you lose sleep over?

Sure there are. Let me be very candid. From a US interest point of view, we do better with Chinese success than we do with Chinese disappointment or failure. Having wrestled with these issues for many years, fundamentally I come down on that side. The problems that Chinese success creates are more likely ones we know how to deal with. China now faces one of the most difficult challenges it’s had since the 1970s: the challenge of significantly restructuring its economy at a time when the political system is structured in a way not to allow that to happen. The incentives for the top party and government leaders in each locality from the provincial level down to the township level – even if this is only the top two people [in each location] we’re talking about, it’s more than 70,000 officials – are very much built around the model that has produced all the growth of the last 30 years. That model has been the basis for rewarding and promoting these officials, so not surprisingly they are comfortable with that model and have learned how to milk it for satisfaction. The economic development model of the 12th Five-Year Plan, which is a model that suits both Chinese and American interests very well, requires restructuring those incentives in a major way. It’s going to be extremely difficult for the top leadership in China to develop the political will power and capacity. You also now have enormous SOEs that are extremely powerful and that would be disadvantaged by the 12th Five Year Plan, and many of them are linked to elite families. So while they formally adopted the 12th Five-Year Plan in March of 2011, I see very little evidence at this point that we’re going to have rigorous implementation of it. Without rigorous implementation of the 12th Five-Year Plan, China within 10 years is going to be in deep trouble.

What are the major problems China co
uld face?

The current model is based on assumptions that are largely exhausted at this point, assumptions about a very large cohort of workers in the 18- to 35-year-old bracket, assumptions about the capacity of the international system to keep absorbing very large increases in Chinese exports, assumptions about the capacity of the eco-system to permit China to develop now and clean up later, and assumptions about popular tolerance of corruption, inequality of wealth, and environmental degradation. All those assumptions were accurate ten years ago, but they’re now largely exhausted. The major problem with the current model is that it’s increasingly inefficient. It’s a very resource intensive model in a country that has a real shortage of resources. But even beyond that, the big Achilles heel is that it generates social tension. And especially if there’s an economic slowdown, so incomes aren’t rising rapidly, then all the other downsides – cancer villages, corruption, inequality of wealth and so on – become increasingly worrisome. The Standing Committee and the Politburo can make some changes and implement them in Beijing, such as changing interest rates at state-owned banks, required bank reserve ratios and the Qualified Foreign Institutional Investor quotas, and that all has an impact. But that doesn’t change the outcomes of the system as a whole. If structural reform fails, we’re going to be dealing with a country where extremism from both the left and the right is more likely to play a larger role, where repression of civil liberties is likely to grow as instability grows, where the consequences in terms of global climate change are likely to be exacerbated, because China will not have shifted away from an extraordinary stress on energy-intensive manufacturing.

Does US policy have any sway in that outcome?

If the US adopts a highly adversarial posture toward China, that’s more likely to lead China in the wrong direction. Nevertheless, at the end of the day the link between the domestic situation and foreign policy is profound, but it’s also not completely predictable. You can always have someone take a foreign crisis and use it to say we must carry out major domestic reform to be set for the future. Or you can have someone take a foreign crisis and say we have to mobilize the military and repress dissent, and we can’t afford to diddle around with the economy. As that “great sage” [former American baseball player] Yogi Berra said, “Predictions are always difficult, especially when they’re about the future.” But if we have to place a bet, we should be betting that Chinese success is good for the US, that deep domestic failure is much more problematic for US interests, and that we have a greater ability to tip the balance to the downside than to foster the upside.